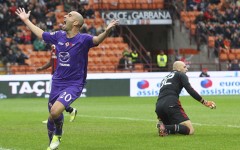 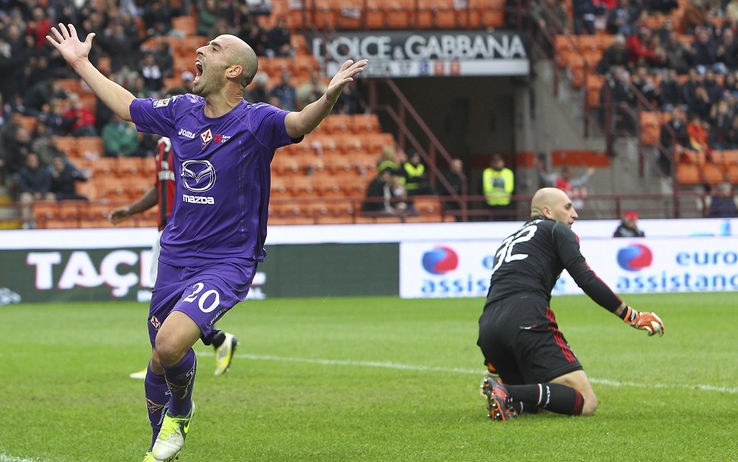 Florence is usually named as the birth place of the Italian renaissance, the rebirth of Italian culture through the medium of literature and art. Reformed after bankruptcy and their subsequent relegation in 2002, and then their flirtations with relegation again last season, it is the city’s football club that are continuing the historic theme of 14th century upheaval.

Fiorentina now sit 4th in Serie A under the guidance of their bright young coach Vincenzo Montella, four points clear of 5th placed Lazio and three points off AC Milan in third in the race for Champions League qualification, the competition which La Viola have not been a part of since 2010, the last season of Cesare Prandelli’s five year reign.

Fiorentina are now on their fourth manager in just over two years after Prandelli departed for the national team and are now looking up. In keeping with the Italian history that is often associated with the revolutionary city of Tuscany, it is a player of great artistry that is driving them back to the top.

Borja Valero’s career also has a touch of the renaissance about it. Released as a 22 year old by Real Madrid after just 2 appearances for his boyhood club, a promising debut year with Real Mallorca led to a move to England with West Bromwich Albion where he experienced relegation from the Premier League within just one year.

He soon returned to Mallorca on loan where he showed his great talent, winning the Don Balon award for best Spanish player in La Liga as Mallorca finished fifth to qualify for the Europa League.

Despite that, Mallorca could not afford to make the move permanent and it was left to Villarreal to offer him a route out of his troubled time in England with another season-long loan in Spain. There, he helped guide the Yellow Submarine to a fourth placed finish before suffering relegation a year later. Valero’s nomadic career that had so far only offered false starts, had to find another home.

Everton offered him a route back into English football but Valero turned it down, glancing instead towards the new era in place at Fiorentina under Montella. The Della Valle family ownership invested heavily in the likes of Alberto Aquilani, David Pizzaro, Matias Fernandez and Valero, who, at the age of 28, has finally seemed to get his stuttering career going in Italy.

In Montella’s 3-5-2 system, Valero sits alongside the defensive reassurance of Pizarro and Brazilian Romulo in a midfield full of technical ability which helps the philosophy of “alla Spagnola”, as Valero himself has called it, full of possession football and short passes. With 29 appearances so far, the ex-Mallorca man has played more games than any other Fiorentina player this season.

Montella was hired on the back of his work at Catania where he got them performing like “little Barcelona” and it is this style of expressive passing and cherishing of the ball that has helped Valero to thrive. Only Andrea Pirlo, at table-topping Juventus, has more assists than Valero’s 9 and after 29 Serie A matches, the Spaniard boasts a passing percentage of 87.7% with a massive 58 chances created.

Valero, in his sub-6ft frame and weighing in at just 73 kg, fits the mould of the stereotypical Spanish playmaker, nimble well-balanced and able to spring away from a congested central area to drive into attacking areas. 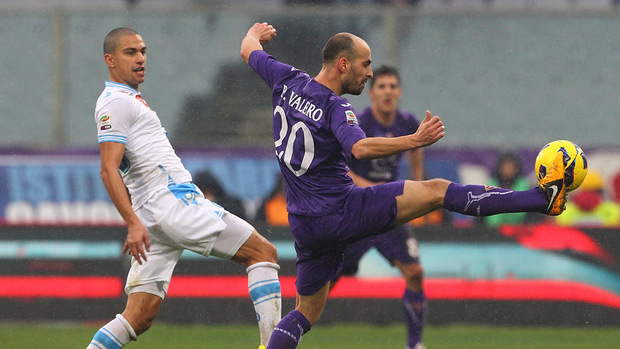 He averages 59 passes per game, with Stevan Jovetic and Adam Ljajic thriving off his ability to thread precision through balls, Fiorentina have hit 53 goals this term as a result of the creative quality Montella has packed his midfield with.

Such a productive year has failed to register on the radar of Vincent Del Bosque in the quest to add to the solitary cap he has with Spain, he has been left out of the recent squad to play Finland and France, though that may come down to the extraordinary generation of talent he is competing against.

The illustrious talent role of Xavi, Andres Iniesta, Cesc Fabregas, Sergio Busquets, Santi Cazorla and Xabi Alonso is a difficult line to breach but it will be enough to Valero to see his career finally starting to pick up momentum in a country where Spanish players have notoriously struggled.

Ivan De La Pena, Ivan Helguera, Gaizka Mendieta, Cesar Gomez and Javi Moreno have all headed to Italy and failed, Valero however, just like the influence of Da Vinci and co. back in the mid 1400s, has graced Florence with his Iberian brand of invention and artistry to become a revolutionary success.

At 28, with a career that has suffered relegations and upheaval just when it is threatening to achieve the promise he showed in his early 20’s at Mallorca, Valero’s time is coming just as he hits his peak.

Under Montella and his bright brand of creative, passing football, he could yet achieve success at the very top. 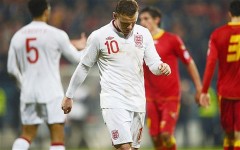 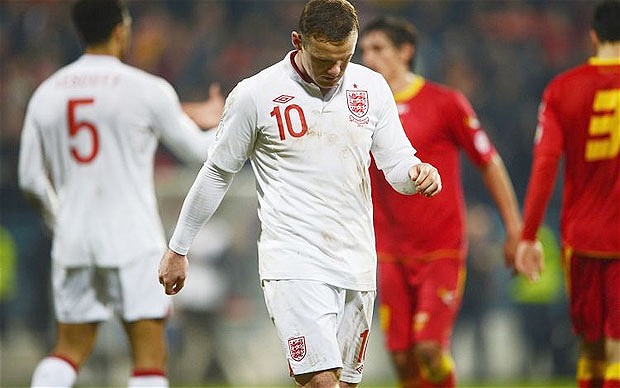 The whole farcical Rio Ferdinand and England episode in the run up to the qualifiers against San Marino and Montenegro highlighted something that has plagued England for too long: an obsession with looking back.

The fact the debate centred on whether or not Ferdinand pulling out of the England squad and travelling to the Middle East to be a TV pundit was a deliberate act of revenge towards the FA or an innocent PR disaster, glossed over a recurring theme. England seem frightened of moving into the future. Petrified of actually committing to the next 5 – 10 years and beyond, rather than only the next tournament.

There’s no denying Ferdinand has been in very good form since the turn of the year and integral to Man Utd improving the defensive record in the second half of this Premier League season. His form is worthy of an international call up, but Ferdinand is 34 and has to carefully nurse his fitness.

He made it be known he was available for International selection and his many backers in the press clamoured for his inclusion; some even suggested that, should England qualify, he should be a part of the World Cup squad.

By the time the 2014 World Cup in Brazil comes around, Ferdinand will be 35.

Whatever the rights and wrongs of how the England captaincy was taken off Ferdinand, his non- selection at Euro 2012 and his row with Ashley Cole, his withdraw from the England squad, explanation and subsequent pundit job was handled spectacularly badly.

Personally, I wouldn’t pick Ferdinand for England again; not because of the recent debacle, but for the same reason I wouldn’t consider John Terry, Scott Parker, Frank Lampard and Gareth Barry for selection: it’s time England moved on. That’s not to say anyone over 30 should be dismissed, indeed

I believe Steven Gerrard and Ashley Cole still have a role to play, though I think the World Cup should be their swan song. Euro 2012 was the ideal tournament to give many of England’s next crop tournament experience, but rather than be brave, England once again harped back to the so-called golden generation, but got the same result as always. As the mantra goes: if you keep doing what you’ve done, you’ll get the same results.

A decade ago, Germany tore up their system and started again. They are already seeing the benefits from the changes they implemented, but I doubt English football would ever have the bravery to do the same.

Also, the Premier League holds too much power to allow the FA to implement the type of changes that were in Germany. Add to that, the changes needed in philosophy at grass roots level with too many coaches and parents of young players mean that it would likely take longer for England to feel the benefit of change to the extent desired. 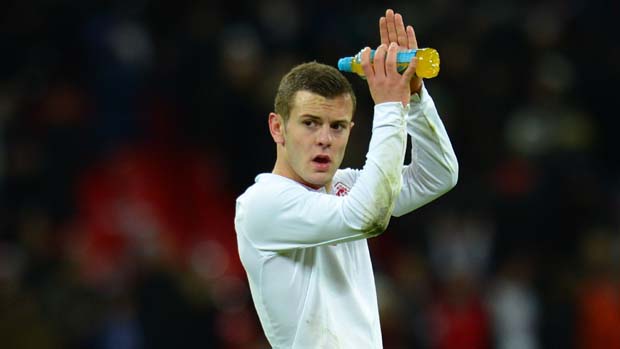 Wilshere…. young players like him need to be backed.

It’s not as though England don’t have any talented young players coming through, but the selection pool and technical level is not as big as it could be. England need to focus on the future and bed some of the best young players in, rather than keep looking at players some way past their peak.

If the so-called golden generation failed to win a tournament in their prime, why makes anyone think they can do it in their mid-thirties?

Rather than fear of failure and going for the safe option, I think it’s time to back the youth, believe in them and look forward, not back.

So, based on England’s reluctance to move on, here’s the squad I expect to be named for World Cup 2014: