Below is an infographic 10 of the Premier League’s most expensive teenage stars by the team at HowToBet4Free and designed by NeoMam Studios. 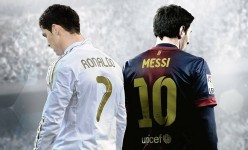 Messi or Ronaldo? A popular and divisive debate among football fans. Two players with different styles, but both wonderful and enjoyable to watch and admire. Below is an infrographic provided and created by the folks at Guarantee Tickets that compares stats and other details between the two living football legends. Regardless of all the records and stats the two behold, both are a pleasure to watch, so let’s enjoy their presence and talents while their still around and in their prime.

The stats highlighted are up until the end of 2014. Ronaldo has since won another Ballon d’Or to make it 3 for the Portuguese talisman to magical Messi’s 4.

Below is an infographic highlighting and detailing the round of 16 contenders in this season’s Champions League. It was created and designed by the folks at Guarantee Tickets.

Below is an original Manchester United football trophy timeline infographic created by Aford Awards, a UK manufacturer of football trophies. 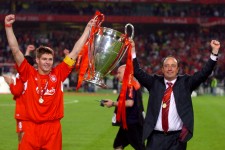 Below is an infographic highlighting Liverpool’s success and achievements over the years. It was designed by Reflect Digital on behalf of Aford Awards.

Below is an infographic highlighting Tottenham’s club history and successes since its establishment provided and designed by Reflect Digital on behalf of Aford Awards Football Trophies in conjunction with the official history team at Tottenham Hotspurs.

Below here, is a fascinating infographic dating and recalling the successes Chelsea have accomplished throughout the years since their establishment in 1905.

Designed by @ReflectDigital on behalf of Aford Awards Football Trophies.

Jose Mourinho is up there among the very biggest names in football management. Think about some of the top bosses in the game today – Guardiola, Ancelotti, Ferguson until recently, and Mourinho’s name always pops up alongside them. It’s no wonder why either, he’s led two different clubs to the Champions League title and won numerous domestic honours across Europe.

Having managed FC Porto, Chelsea, Inter Milan and Real Madrid, four regular participants in the top competitions across Europe, it’s easy to see why he has such a reputation. However, he also has a reputation for being somewhat eccentric and outspoken. He did of course christen himself as “a special one” in his press conference at Chelsea having agreed a deal to take over as boss at Stamford Bridge.

Now, ahead of “the second coming”, the Soccer Store have created this great infographic that shows some of the best bits about Mr. Mourinho, from his managerial record to his philosophy and style of management.

The argument over how much footballers are paid in the modern era has been going on for years now and shows no sign of stopping. Some of the world’s biggest names are now playing with wage packets that let them take home more in a week than many of us will make in our lifetimes, and all for kicking a ball around - if they even get on the pitch of course!

It hasn’t always been the case that players earned hundreds of thousands each week, however. In actual fact, some players were earning the equivalent of £228 each week back in the 1900s, the same as what many full-time workers in the “real world” earn today.

This infographic, created by equipment retailer The Soccer Store, shows just how times have changed, from the early days of £4 per week right up to the £200,000-a-week contract signed by Carlos Tevez in 2009.

Written and created by Matt Rawlings

At PowerTable, we are always looking for new and innovative ways to present football data to fans of the beautiful game. We have therefore come up with our La Liga infographic which is a visual way of showing random data, stats and facts to do with the Spanish football season so far.

For instance, how many different goalscorers has there been?  Who has made the most passes?  Who is the oldest player? Which team has scored the most goals in away games?  We think we’ve produced the best football infographic on the La Liga ever created, what do you think?