Five wins from the opening five — a club record and quite the statement of intent from Marseille who dominated at Nancy but somehow failed to convert any of their first-half chances. The breakthrough came just before the hour courtesy of the Ayew brothers — André crossing for Jordan — and it turned out to be the winner.

An impressive, and perhaps surprising, start from Élie Baup’s team who are beginning to prove themselves as genuine title-contenders alongside Lyon and PSG.

With Lille and Montpellier both seeming to have their minds on the Champions League, their league threats may be somewhat blunted. Marseille’s only potential problem could be a lack of squad depth; with Stéphane Mbia and Alou Diarra departed, their only direct replacement Joey Barton is suspended until November.

PSG are beginning to look comfortable, and they brushed aside the previously unbeaten Toulouse with very little problem on Friday night. Jérémy Ménez and Zlatan Ibrahimovic linked up well, with Ibra netting his fifth of the season.

Earlier in the game, Javier Pastore’s neat chip marked the first non-Ibrahimovic goal of PSG’s season. The Swede said “If I score, I am happy, and if someone else scores I am even happier!” but that seems rather hard to believe.

The slightly less free-scoring Montpellier lost their third game of the season 3-1 away at Reims as, yet again, their defence was cut open far too easily.

Coach René Girard admitted: “This is the first evening where I have had to ask myself some serious questions. We lost our values. We can be ashamed of ourselves tonight.”

The reigning champions have big problems ahead of facing tougher opponents in the Champions League. They face the man who they are missing dearly already, Olivier Giroud, and his Arsenal team, on Tuesday night.

There was a bizarre game at Nice where it was goalless at half-time but finished 4-2 to the hosts.

In truth, Brest were never in the match, with both their goals coming while they were three goals behind, and Nice did enough for their first win of the season.

Sochaux also picked up their first three points with the ultimate smash-and-grab at Saint-Étienne.

Simon Pouplin had an incredible performance, and certainly didn’t look like a keeper who had spent a year without a club, before Thierry Doubaï’s fantastic overhead kick fifteen minutes from time was enough to seal the points for the away side and lift them off the bottom of the table.

Replacing them at the bottom were Troyes, despite a decent point at home to Lille. The 2011 champions haven’t had the most convincing start to the season, and failed to capitalise on their 1-0 lead before conceding a late equaliser.

Rudi Garcia’s side will need to win against BATE on Wednesday to have any chance of getting out of a Champions League group containing Bayern Munich and Valencia.

Alain Traoré was again the star for Lorient in the Brittany derby against Rennes, scoring his third and fourth goals of the season, and once again they were spectacular. A delicious first-time lob over Benoît Costil was followed by a free kick reminiscent of a Roberto Carlos swerving effort. 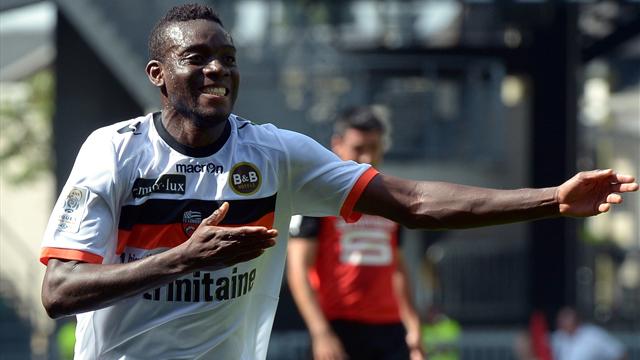 Rennes were uninspiring in a 2-1 defeat that left them third-from-bottom, and their rivals third from the top.

Just above Lorient in second lie Lyon, who did enough to dismiss Ajaccio. It could have been more but for a rather greedy Bafétimbi Gomis who seemed intent on going alone at every opportunity, but a goal in each half from Dejan Lovren and Lisandro López were enough to seal off the visitors.

The Corsican side brought on new signing Adrian Mutu for his debut, but it remains to be seen whether he will turn out to be a useful acquisition or a mere vanity signing.

Six Ligue 1 sides are involved in European competition this midweek, with Montpellier facing the toughest task, against Arsenal.

Interestingly, only Marseille have an away tie, a lengthy trip to Istanbul to face Fenerbahçe, so we may well see some rotation from Élie Baup, giving some of his younger players a chance before refocusing on the league for Sunday’s clash with Évian.

Lille have a home tie with Lyon to prepare for after their Champions League game against BATE, so this week will be crucial in gauging how competitive they will be this season. Lyon themselves will play Sparta Prague on Thursday.

Paris should be fairly confident in getting out of a group also containing Porto and Dinamo Zagreb, and Tuesday should see the long-awaited debut of record signing Thiago Silva as the side from the capital continue their effort at world domination. 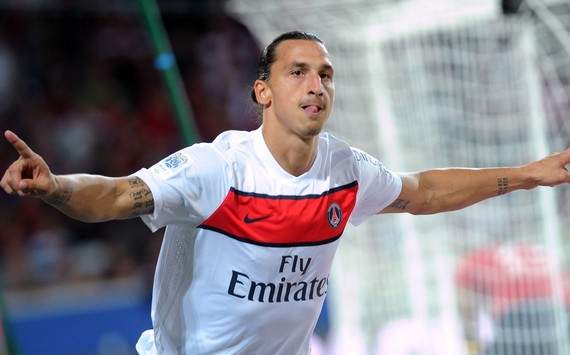 Right then — Ligue 1. It’s a bit interesting now, isn’t it? With some very big money arrivals, and equally expensive departures, people seem to be starting to take the French league seriously.

While Eden Hazard’s early form at Chelsea has shown the league isn’t as weak as many would have you think, the arrival of some of the best players in Serie A in Thiago Silva, Ezequiel Lavezzi and Zlatan Ibrahimovic perhaps indicate a shift in the power balance. OK, so PSG’s petro-dollars are behind all of those, but it was encouraging to see players like Salomon Kalou and Adrian Mutu choose to move to France, as well as the likes of Mapou Yanga-Mbiwa and Marvin Martin staying in the country.

With Lyon’s monopoly on league titles well and truly over, and four different champions in the last four years, Ligue 1 is looking stronger and more competitive than ever.

Two of the strongest looking outfits, the aforementioned oil-powered Paris Saint-Germain, and 2011 champions Lille, met on Sunday with just one league win between them. Having sealed their place in the Champions League group stage during the week, Lille were slow to start, and were punished within a minute by Ibrahimovic.

PSG’s slick passing in the build-up to the goal displayed that their expensively-assembled side is beginning to show some cohesion, a lack of which had led to their string of draws in their first three matches of the season.

Aurélien Chedjou’s second goal of the season levelled the scores before Ibrahimovic’s second of the match put Paris back in front. The Swede has scored all of his team’s goals so far this season and seems to enjoy being an even bigger fish in a perhaps smaller pond.

Reigning champions Montpellier got their first win of the season this weekend too, as the returning Younès Belhanda pulled the strings in a straightforward win over pointless Sochaux. Montpellier have had an awkward start to the season as they dealt with the loss of last season’s top scorer Olivier Giroud. The goalscoring baton has been passed to the significantly less handsome Emanuel Herrera, who got his second goal for the club, albeit a tap-in.

Sochaux look in deep trouble, having failed to significantly strengthen a side that finished just four points above the relegation spots last season, and have since lost their primary creator and goalscorer in Marvin Martin and Modibo Maïga respectively. Winger Sébastien Roudet’s comments that Sochaux “are a Ligue 2-quality squad” won’t encourage the fans, who saw their side qualify for European competition just two years ago.

While Sochaux have made the worst possible start, Marseille are flying with four wins from four. Élie Baup was something of a leftfield appointment to succeed Didier Deschamps, but, of course, the appointment suddenly looks a masterstroke in a week in which OM successfully qualified for the Europa League group stage and got a deserved victory against Rennes at the Stade Vélodrome.

Mathieu Valbuena looked sharp, and the return of Loïc Rémy was another positive sign, but there was one clearly outstanding performer in André-Pierre Gignac, who is playing, in stark contrast to last season, like a man with all the confidence in the world. This was summed up by the gall he had to even attempt his glorious strike to make it 2-1 to the home side. If Rémy can make a full recovery from his long-term injury problems, Marseille will go from strength to strength.

After a tricky start, Saint-Étienne have picked up six points in seven days, scoring seven without reply. In their 3-0 outclassing of Bastia they were efficient in launching counterattacks and clinical in front of goal, thanks mainly to Pierre-Emerick Aubameyang, scoring one and creating another. With Brandão still to be integrated into their attack, things are looking up for Christophe Galtier’s men.

Lyon had a mixed final week of the transfer window. While Cris was a great servant to the club, his departure to Galatasaray will not be much of an issue on the pitch, especially after the arrival of Milan Bisevac. But the loss of Hugo Lloris will be much more keenly felt, with long-term bridesmaid Rémy Vercoutre finally getting his wedding day. The goalkeeper has never played a full season as first choice in his career, so will take a bit of time to become fully match-ready, as was evident in his half-hearted effort to collect a Valenciennes cross that led to the opening goal on Saturday.

New signing Steed Malbranque and Clément Grenier were industrious in midfield to turn the game in Lyon’s favour, the latter scoring a deserved winner.

Elsewhere, Toulouse continued their unbeaten start to the season, but made hard work of it against newly-promoted Reims. Wissam Ben Yedder boosted his burgeoning reputation with an excellently taken equaliser, his third of the season, and his form has earned him a deserved call-up to the France under-21 side. Ben Yedder was influential in all of Toulouse’s good work, and, with the smallest squad in the league, his manager Alain Casanova will be desperate for him to avoid injury over the international break.

It’s been a long time since Ludovic Giuly has been eligible for the U21s, but he showed he’s still got something to offer France’s top flight with Lorient, as he scored against Nancy. Deemed surplus to requirements in Ligue 2 by Claudio Ranieri’s Monaco, the signing of the 36-year-old could turn out to be a shrewd move by Christian Gourcuff, bringing experience to a squad that survived relegation by just a point last season.

A player who could have an impact over a longer period of time could be Alain Traoré, scorer of a glorious free kick from an unlikely angle. Whether these summer signings can end Lorient’s appalling record away from home next weekend at Rennes remains to be seen.

The final word goes to Évian, who have sacked Pablo Correa after a gutless performance against Ajaccio. In a grand tradition of former managers in sinister “sporting director” roles, the Uruguayan has been duly replaced by Pascal Dupraz.