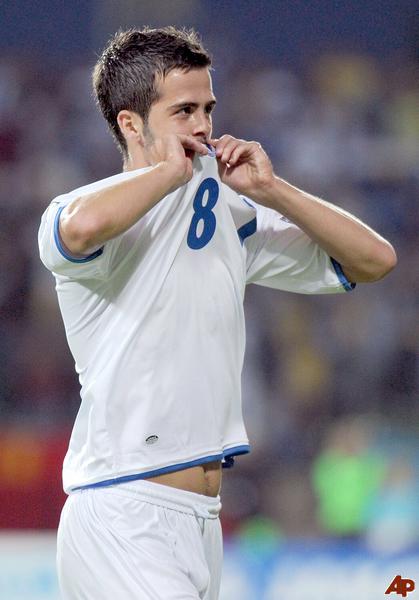 The whole of Bosnia prayed for two days. They were praying for a miracle, for the good news coming from Rome, someone saying that all this is a bad dream and that Miralem Pjanić’s injury just looked horrible and nothing else, and that he’ll be ready to lead the Dragons against Greece on March 22nd. But, miracles in football are not common.

For the second time in these qualifiers, Pjanić will miss the encounter against the biggest and toughest rival in the group, Greece. That is a fact, just as the fact that this news is a huge blow for Safet Sušić and his ambitions in this match. Matches played so far, especially the one in Athens that Pjanić also missed, proved that Miralem is the key man in this Bosnian team. He became the player who is not afraid of taking the responsibility, one of the rare with a creative mind in that team, and it’s no wonder that Sušić did not sleep for two days. Neither were some of us.

However, this is not the end of the world. Nor such a tragedy as the Bosnian media presents it.

People in Bosnia are going that far to call for an alternative medicine and local sorceress and diviners to get him ready for Greece, which is idiotic. This is football and things like this happen. What more, the worst thing Bosnians could do now is to force Pjanic to return too early, because that could mean losing him for the future.

The Greece warfare is significant and very important, but it is only one amongst all the others. In World Cup qualifiers teams have to play ten matches, and points won in the other eight are not less important than the points won in the matches against Greece. What more, in some cases, the points that are still left to play for can be more important. After all, the best teacher is history - if Bosnia won three points in Tirana in the last qualifiers, they would play in Poland and Ukraine last summer.

Beating Greece would mean a lot in the Brazil race, but Bosnians are creating the wrong image. This match is important, but it is not the only important one. It is not ‘to be or not to be’, it will not decide the passenger to Mundial. The qualification to the major tournament is not depending on one match, one player, one ball… It depends on consistence through the whole competition, on keeping the same form against all the opponents, the best and the worst ones.

Bosnians tend to overreact and this is one those cases. Miralem Pjanić will be missed - he is indeed their best player at the moment - and it will be hard for the Dragons to cope with the Greeks without him. But, the most important thing for them is to stay with their feet firmly on the ground, whatever happens. The qualifiers reached their first half, five more matches are there to play after Greece, including visits to Bratislava, Riga and Vilnus, places where you have to fight for every point. After all, they avoided losing in Athens in the same situation, with Pjanic being side-lined due to injury.

At this present time, the Bosnians are the ones with the problems, but at some point the same will happen to the Greeks, Slovaks and everyone else. There’ll be rises and falls, unexpected results and surprises, small details that can prevail.

What Bosnians can’t afford is to blow things out proportions - negative like in this case or positive in the case of beating Greece and creating euphoria. They have to avoid walking on the clouds and focus on the sacred goal, and that is Brazil.

Pjanić will be missed against Greece, but that changes nothing - at the end he will be the one that steers this team on its road to Brazil. A road that takes much more than just 90 minutes to complete and, hopefully, overcome.

Jose Mourinho said the world’s eyes would be on his Real Madrid side’s captivating win over Manchester United on Tuesday night, but that would have been a discredit to events over in Germany where Borussia Dortmund are offering their own brand of entertainment. As Madrid battled into the quarter-finals of the Champions League at Old Trafford, Dortmund joined them with a fine display at home to Shakhtar Donetsk.

Their 44 year old manager Jurgen Klopp, already boasting a decorated coaching reputation enough to make him an attractive proposition to the likes of Chelsea, stepped calmly into the media room after their 3-0 win and in fluent English, announced how “cool it was” to reach the last eight of UEFA’s premier competition for the first time since 1998.

A year before they had won the trophy with the well-drilled organisation of Ottmar Hitzfeld which suffocated Manchester United in the semi-finals and nullified Juventus’ majestic creative quality in the final, one will remember the superb job Paul Lambert did in man-marking Zinedine Zidane, but the ease with which Dortmund brushed aside Shakhtar last night will have made a case that the triumph could be repeated in Wembley this coming May.

It is a different dynamic ushered by Klopp, instead of the efficiency of Jurgen Kohler, Mathias Sammer and Martin Kree at the back and the relentless work-rate of Lambert and Andreas Moller in midfield, there is the technical brilliance of Mario Gotze and Marco Reus, the sublime passing of Ikay Gundogan and the smart movement of Robert Lewandowski. It is a young, slick, fluid unit littered with smart technicians who are fully comfortable on the ball. Dortmund are, to us Klopp’s terminology, a “cool” side.

They were far too cool for Shakhtar who were exploited by the movement of Gotze, who scored the second after delivering the corner for Felipe Santana’s opener, and Reus off the attacking line led by Lewandowski. The Polish striker used the freedom afforded by Klopp’s loose 4-2-3-1 to drift out to the right to provide Gotze before Jakub Blaszczykowski, playing on the right, got in on the act to roll home a third following a spill by Andriy Pyatov in the Shakhtar goal.

The Ukrainians were dragged around the pitch by Dortmund’s 54% control of possession and were picked off by the fluid interchange and understanding Dortmund boast in attack. The Germans had 17 shots to Shakhtar’s 12, the latter figure swelled by Mircea Lucescu’s reckless abandon of an already lost second-half. It became a rout. “I hope Dortmund reach the final as they’re a very strong side” said the Romanian coach, “I believe they deserved to go through, overall, the result correlates with what we saw on the pitch”, the assessment was not too far from the truth.

A third straight Bundesliga title will elude Dortmund this year as they lie 17 points behind league leaders Bayern Munich, despite only losing 4 times in their 24 matches, a large indication of the extent of Bayern’s unrelenting domestic dominance. Yet it has been another great campaign for Klopp and his talented squad, they finished top of the Champions League “group of death” outplaying Manchester City and Real Madrid in the process, and to show how dangerous their attacking quadrant can be, they have accounted for 44 of their 54 goals in the Bundesliga this season.

Marco Reus has been a revelation since his £14 million move from Monchengladbach in the summer having scored 11 goals and providing 8. The axis of him and Gotze is integral to Klopp’s system of high-tempo pass and move that relies heavily on the combative presence of Sebastien Kehl alongside Ilkay Gundogan, the deep midfield launch-pad who dictates play with both long and short range passing.

A narrow system in midfield allows for easier retention of the ball while Lukasz Pisczek and Mario Schmelzer provide the width from full-back. It is a system that is now almost second nature to Dortmund as Klopp has used it 21 times this season and refuses to deviate from it on the continent where possession is key.

At the back, centre-halves Nevan Subotic and Mats Hummels, who missed the game with Shakhtar, are both perfectly able on the ball, in-keeping with the modern game importance of bringing the ball out on the ground. It is an exciting squad in which every player is a talented ball-player.

Sir Alex Ferguson named Dortmund as the favourites to land the competition he was eliminated from on Tuesday, the same night the German club were making a claim that the Scot maybe won’t be too far from the mark. They will face tougher propositions than Shakhtar as they progress into the latter stages of Europe’s elite competition, but their exciting band of ambitious talents, led by their vernal and amiable coach, will be primed for the tests that will follow.

It could be 1997 all over again for the Black-Yellows.