If you, like me, have always been intrigued by what goes on behind the scenes in Premier League clubs and football clubs in general, then the secret footballer is absolutely the ideal book to buy. If you are unfamiliar with the secret footballer, well there isn’t much to know, it’s an anonymous professional footballer talking about his experiences in the beautiful game, and it is one of the few books that I’ve been truly devastated by the fact I’ve finished reading it.

The player shares stories and gives his opinion on a wide range of topics. His childhood as a passionate fan of the game, his adaptation into being a professional player, and perhaps most interestingly, his battles with depression. A lot of the tales he tells are predictable, and are similar to what those you’d imagine professional footballers at young ages do when they are essentially showering in money.

However, others are much more thought provoking and surprising. The player describes his financial issues that came about due to his own carelessness, as well as some opinions which many inside the game are almost too scared to share.

The book isn’t just stories either. He gives his own views on a range of taboo subjects such as homophobia, racism, gambling and mental health problems within the game. Reading his views are refreshing, and part of me feels that the player, whoever he is, would make a better FA or FIFA representative than a rich, elderly businessman. Although some of the player’s gripes could be seen as childish and out of touch with ordinary people who can only dream of being a professional footballer, the player justifies every one of his claims.

For example, describing how painful being a professional footballer is at times may seem an ungrateful and unappreciative at first, but upon further reading, you begin to worry for the player’s livelihood, and make you question what these players do when the full time whistle blows.

Don’t worry though, the player’s story does paint the life of a footballer as ludicrous, and as wild as many people expect and dream of it being. Some of the stories told are genuinely shocking, and the player tells tales of the obscene amounts of money spent on certain nights out, the extreme gambling addiction of two of his old teammates, and what a day in the life of the footballer during his depression consisted of. Parts of the book makes the footballer’s lifestyle seem idealistic, in one of the later chapters, he lists some of his purchases he made during his most financially blissful years.

It makes you think, if a Premier League footballer lives like this, what must the billionaire businessman and entertainers live like? However, this feeling of almost envy swiftly turns to pity and horror as the realities of depression bought about due to personal problems, injuries and other things are detailed. I’m sure many others, whether they are rich or poor can relate to his fears and feelings of uselessness.

‘’The secret footballer’’ is not all tales of wild parties, it’s a story of life, beliefs, talent and morals. What toll does professional football have on him? Living his life so recklessly by his own admission and then his spiral into financial troubles and the remarkable story in how he got out of potentially being homeless.

The training ground stories of players and managers being late and duly punished, as well as the often viscous bullying of younger players by experienced heads are all fascinating and at times shocking insights. A brilliant book that has given me a thorough and genuine insight into the life of a player in today’s game.

A selection of the book’s best quotes (without wanting to spoil anything):

“I sat in that chair because I knew that once I did, I wouldn’t have to get up and do something I couldn’t face’’ (on his depression)

‘’ (John) Terry may as well have a whistle such is his influence on matches. The man gets away with murder on the football pitch”. 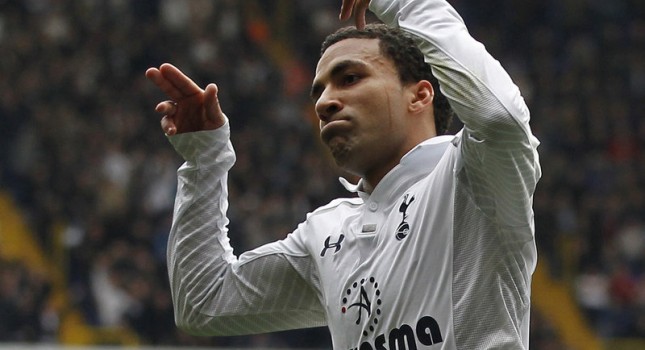 It’s that man again, Gareth Bale. Hogging the headlines once more after scoring his 16th Premier League goal of the season to set the platform for Spurs’ huge win over rivals Arsenal in the race for Champions League qualification. The Welshman waited until the 37th minute before making his ruthless contribution to send Tottenham on their way, but two minutes later the attention shifted to his opposite flying-winger, the right-sided Aaron Lennon.

Lennon latched onto a pass from Scott Parker, just like Bale did with Gylfi Sigurdsson, to escape from the Arsenal back-line with unerring pace to round Wojciech Szczesny and make it 2-0. It was only his fourth goal of the season but as he wheeled away to celebrate sealing his team’s win, it was a notable reminder that Spurs possess not just one electrifying winger, but two.

His wide-berth will excuse Lennon’s relatively modest goals return for a campaign that has been largely impressive. The only player to start all 28 of Tottenham’s league games so far this season, as well as making another 7 in the Europa League, he has registered 7 assists in total, more than any other Spurs player, going someway to denounce the criticism regarding his lack of consistent end-product that has previously undermined his trade as a speed-merchant winger.

It is this season’s form that injected the confidence in Lennon to whizz past Arsenal’s left-back Nacho Monreal to control Parker’s incisive through-ball with a couple of touches that took him seamlessly past the helpless Szczesny to leave an open goal. His low sense of gravity, superb balance and agile frame allows him to flee past his marker with consummate ease and now he has added a tangible to his game, he is developing into a dangerous force for his club whilst surely threading a future for his country too.

His strike was an epitome of what Lennon offers to Andre-Villas Boas’s system at Spurs. Operating mainly as an inner-winger in a 4-2-3-1 so Kyle Walker has room to bomb forward from his right-back station behind him, his lightning pace has the opposition full-back constantly guessing whether he will dash into the channel between him and the centre-half, like against Arsenal, or look to go on the outside to fizz a dangerous cross into the penalty area.

He is also vital to an attack that looks to move the ball fluidly and intricately across the front-line, currently sitting on a pass completion percentage of 85% and creating a clear chance, on average, twice a match.

It is little wonder that Lennon’s goal sent Spurs seven points clear of their north London rivals as they march towards the Champions League squad with a multi-talented squad. As well as the danger of Bale, opponents also have the goal-threat of Defoe and Clint Dempsey, the power of Sandro and Moussa Dembele and now the vibrant form of a 25 year old Lennon who has previously failed to realise his potential, whether it be hindrance through injury (his groin in 2009 or his hamstring last season) or his lack of form, a plummet under Juande Ramos in 2007 saw him suffer a 2 year absence from the national team when his career was just beginning to kick-start. He is now thriving under Villas-Boas.

It was his blistering from of 2010 under Harry Redknapp that saw Lennon make Fabio Capello’s England squad for the World Cup in South Africa and start the first two games, vs U.S.A and Algeria. What followed was a two year absence for Lennon on the national scene with just two caps coming against San Marino in October and Brazil, in a 14 minute cameo, last month.

If the 25 year old can continue to replicate the form he is currently showing then it will not be long before Roy Hodgson considers making him his first choice right-winger ahead of the man he upstaged on Sunday, Arsenal’s Theo Walcott.

Villas-Boas has injected serious improvement to this Tottenham side who are relentlessly pursuing the Champions League spot that eluded them last year. With Lennon, contracted at White Hart Lane until 2016, developing into a right-wing force to be ranked among the best in the Premier League, elevation to the highest level could see even further improvement in the player who promised so much when he became, aged 16 when at Leeds, the youngest player to appear in a Premier League game.