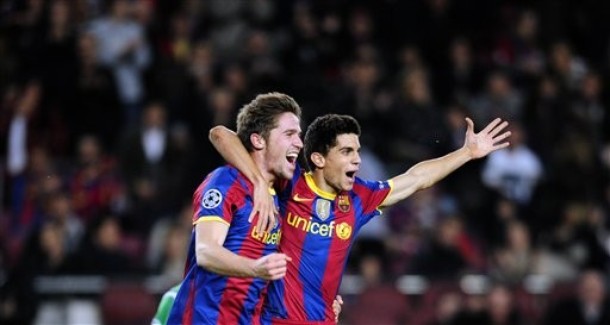 It has been a year of foreboding for Barcelona, sitting comfortable at the summit of La Liga by a margin of 13 points as they close in on the title, while also looking ominously potent in the Champions League, yet the first season post-Pep Guardiola his hinted at some of the problems behind the shield of invulnerability that has characterised the all-conquering Catalan club over the trophy-laden recent years.

Whilst Lionel Messi has continued his habit of smashing records and the midfield trio of Sergio Busquets, Xavi and Andres Iniesta continue their unmovable devotion to the brand of “tiki-taka”, questions have been raised over a defence that has, on occasion, appeared worryingly shaky.

This has come with the 31 goals they have shipped in the league, with ten games remaining just four less than the highest amount conceded in Guardiola’s four-year reign. In the Copa Del Rey, Real Madrid ruthlessly disposed of them in the Nou Camp with cutting counter-attack while AC Milan leeched on such weakness to establish a 2-0 lead in their Champions League tie, before succumbing to Messi and co. in the second leg.

Even in that game in the Nou Camp, Milan had enough chances to see the job through but were undone by wastefulness in front of goal. However, as Jordi Alba sealed the 4-0 rout from his position of left-back, there was a feeling that his defensive partners would have to tighten up considerably if they are to reach their second Champions League final in three years.

The central defensive partnership of Carles Puyol and Gerard Piqué, that has often been so solid for both club and country, has suddenly appeared insecure. Piqué, as many would point out, has usually relied on Puyol’s excellent reading of the game to bail him out from his eccentric positional sense. The latter, at the age of 34, has started just 12 times this season as ageing limbs begin to take effect, leaving Javier Mascherano being asked to play out of position alongside Pique who has a tendency to look weak without his experienced captain alongside him. 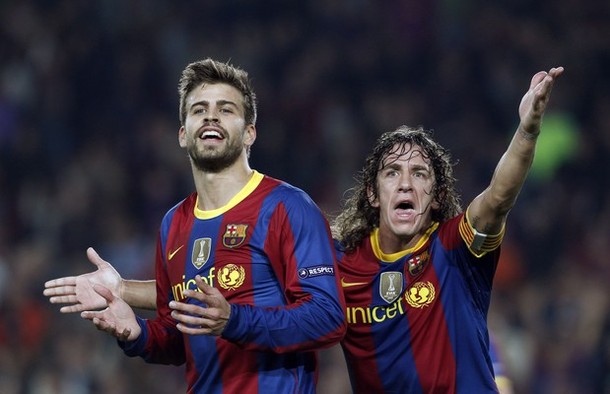 The Pique and Puyol partnership…. shaky at best this season.

Tito Vilanova signed Alex Song for 19 million euros and has fielded him at centre-half on a couple of occasions despite being deployed in his natural centre-midfield berth at Arsenal. Underneath that four, which continues two centre-backs and two stop-gaps, there appears to be nobody able to gain the trust of Vilanova.

The Catalans have been linked with summer moves for Thomas Vermaelen and Daniel Agger as well as Real Sociedad’s highly talented 21 year old Inigo Martinez, but it is a prevalent question why the answer hasn’t appeared from the conveyor belt of supreme talent of which their success has been founded, the talent chamber of La Masia.

Andreu Fontas and Marc Bartra have both been educated by Barcelona’s highly fertile coaching set-up and are waiting in the wings to possibly provide the same defensive security as Vermaelen and Agger without having to pay a considerable fee. However, despite the vast array of appearances they both made for Barca’s “B” side, they have made just 16 appearances combined since Fontas was handed his debut by Guardiola as an 18 year old on the opening day of 2009.

Fontas is now 23 and on loan at Mallorca in a quest to find regular football after suffering anterior cruciate ligament damage last winter, but he has also found regular game time hard to come by on the island, making only 8 appearances as he plays back-up to Joao Victor. Bartra meanwhile has been handed 6 substitute appearances by Vilanova, but he hasn’t appeared at all since mid-November’s defeat of Real Zaragoza when a muscle injury ruled him out for 3 weeks.

Now, with Puyol out for up to 3 weeks after surgery on his knee, it is possibly time for the 22 year old Bartra to step up to prove he can be the heir to the captain’s position. Jordi Roura, Vilanova’s assistant and stand-in coach whilst the manager recovers from his illness, has indeed suggested he can, “he obviously has a bigger chance to play” he said, “we love his hard work”.

In the league, where Barcelona a marching to the championship with consummate ease with ten matches left, there is no better chance for Bartra to prove Vilanova’s judgement correct when he, according to Roura, made the decision to block a possible sale last summer.

The La Liga title will be hoovered up barring a miracle but, after experiencing a concerning degree of turbulence in their passage past Milan in the second round, the Champions League may elude them just like it did last year when Chelsea exposed their lack of pace on the break. With Piqué liable to struggle and Puyol hitting the injury-torn autumn of his fine career, there is little doubting the Catalans must renovate their back-line of the summer or risk a serious malaise.

Despite Fontas’s injury troubles and Bartra’s worrying lack of game-time considering he has remained perfectly fit over the past four months, there will be a hope that at least one of them can join the extraordinary company of La Masia graduates to step up to regularly play in the first team. Barcelona definitely need a new defender or two, but the question is whether they come from within. 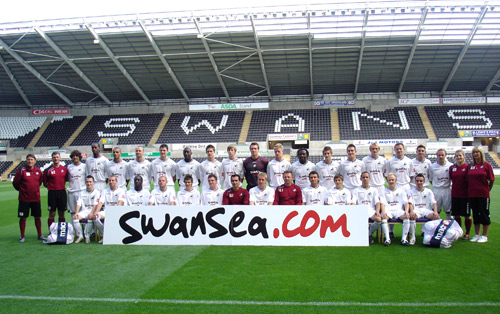 That dreaded line for any parent on a long journey, a question we can also ask ourselves as Swansea City supporters as we too are on quite a journey. My answer would be ‘nearly’ there, so where next for our club?

Before we look ahead, let’s rewind and appreciate recent points of our journey.

It has been well documented that we were rock bottom a decade ago, at least it was our rock bottom. Thankfully we didn’t suffer the ‘Luton’ or ‘Oxford’ both of whom a generation previously had reached their Wembley cup finals, both winners of a major cup. It’s a volatile game this football thing.

Neither club has recovered to reach similar heights after losing their league status but after so long in the conference it was nice to see Oxford promoted back to the Football League. That fateful day against Hull could have delivered an entirely different direction for our club and we danced with the devils of non league. Would we have returned?

I believe so, I have considered a few reasons why but thankfully we will never know the answer to that question, one thing for sure is that we wouldn’t be parading cups around our city on a bus full of internationals stars.

Size counts for nothing in this ruthless game, the worst teams fall through the trap door, we are a much bigger club than both Luton and Oxford, boasting far greater fan bases and population but comparisons can be drawn between the clubs. Seven hundred and fifty thousand people live within a forty-five minute drive of Swansea, that’s a huge catchment area.

More importantly, the hands of our club are in the safest set in the entire football pyramid, and have been since 2001, two years before our judgement day. Huw Jenkins and Martin Morgan in particular have built this club with their hands dirty and through their heart and soul, for the city and its supporters, not themselves.

The board in the winter of 2003 recognised two things that could be done to affect the journey and change the destination, bringing in players and fans. They did both by running several cheap ticket schemes that doubled the attendances from 3500 to 6000 and beyond, the extra revenue generated was reinvested in Martinez, Britton and Tate, amongst others. History and survival has been well documented since.

So, acknowledging the past will always have our board and long term supporters appreciate the present and future. Accepting where we are in the pecking order of football hierarchy can bring perspective to what we have achieved when planning the next steps. So many managers become victims of their own success with Nigel Adkins and Brian McDermott recent examples. Thankfully our board see the hill in front of them and have one eye, not two, on the mountain beyond it.

If this was ‘bet in play’ would we cash in now? Have we peaked? How far can we develop our club? Are we now considered a big club? Are we there yet?

We were promoted in style, also in hope not belief that Premier League could be retained. Belief has now turned into expectation, as I predict a minimum five year run at this level.

If there was a check list of items necessary to develop in this league, I believe we tick every box , we can now set our targets even higher beyond the hill and towards that mountain.

We remain debt free, profitable, focused on developing a young squad under long contracts, under a manager committed for the next season at least, our profile grows month on month and the board have the investment priorities in the right order.  It’s all about the Liberty, the team and new training facilities absorbing the cash surplus, what we can afford and pausing what we cannot. 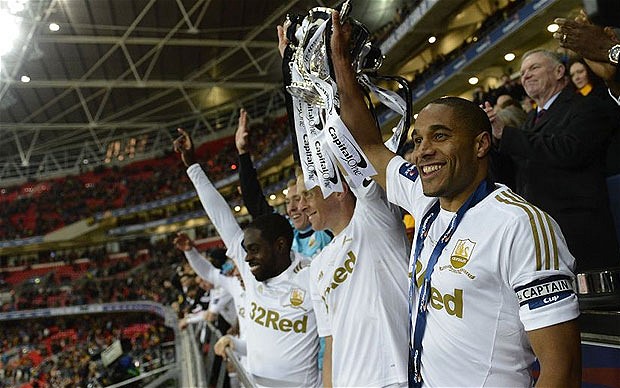 League Cup triumph…. a major feat for the flying Swans.

There is not another club in the Premier League that ticks every box, this leaves us in an enviable position where we can prosper and become a ‘big club’, this has to be the goal. There is no actual definition of a big club but the most common factor considered is attendances, also there is often no correlation between population and attendances so it comes down to history. Clubs like Norwich, Sunderland, Ipswich, Wolves, Southampton and West Brom punch well above their weight but this is down to a prolonged time in the top flight.

A top flight stay breeds a generation of fans, it becomes a habit and one that we all know well. Most remain through relegation and tough times therefore securing greater revenue at lower levels and the probability of a promotion. This is in the minds of the Swansea board as they embark on the investment for stadium expansion, the interest is not the revenue as there is enough of that swilling around, it’s the bums on seats for the future of the club.

Adding to this the fact that ‘we’re all going on a European tour’, again the few million yield on this adventure is of secondary importance, the raised profile attracts both players and fans, embedding our proud name in the media every Thursday across Europe. Iron the banner Mrs J, me and the fella are off to Latvia.

So, are we there yet? I don’t think so, but we do need to understand where we sit in the order of things. We will not be competing for the Champions League, firing our manager for not winning the league, booing our players off the pitch for not winning five nil or chanting ‘sack the board’.

Let’s not forget our values as a club as we become more successful, our recent history is now our best history but I believe there is more to come, lots more. The first ever top flight south-Wales derby perhaps? Let’s hope not!  A serious crack at Europe, an FA Cup and a decade in the best league in the world sounds like a great destination for me.

But let’s not forget, ‘we are Swansea, and we know who we are’.