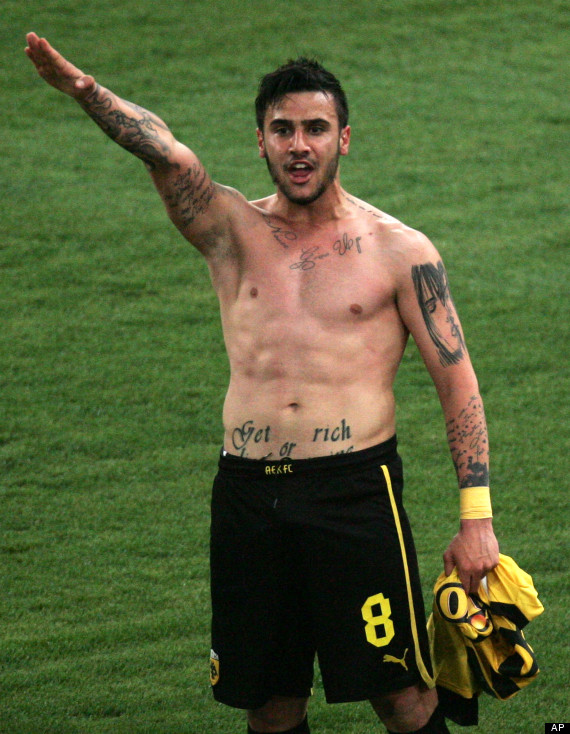 Professional football players celebrate their goals in a lot of unusual and sometimes distasteful ways. For Giorgos Katidis, who plays with the Greek club AEK Athens, his celebration included a Nazi salute.

This proved to be so distasteful for those who witnessed it that the midfielder was immediately banned for life from playing for the national team. Katidis made the salute after scoring the game-winning goal for AEK against Veria on March 16.

The incident took place in a Super League game at the famous Olympic Stadium in Athens and a video of it quickly went viral and spread around the world. While Katidis is just 20 years old, he’s a star with the national junior team and was expected to break into the senior national side in the near future. In his defense, Katidis said he didn’t know what the gesture meant and it was just done at the spur of the moment in celebration of his goal.

Katidis claimed that he hates fascism and didn’t realize what the salute meant and what he was doing. The football federation in Greece said that the player’s actions deeply insulted the millions of people who were affected by the brutality of Adolf Hitler and the Nazi regime in the 20th Century.

Ironically the day that Katidis made the unfortunate gesture was the very same day that Greece was marking the 70th anniversary of the start of deportation of Greek Jews to extermination camps which were operated by the Nazis during the Second World War.

Katidis changed his story slightly, or simply forget to mention it, but later on he said he made the salute because he was actually pointing to one of his injured AEK teammates who was sitting in the stadium’s stands. He claimed that he’s certainly not a racist and doesn’t have any strong political views.

He said if he knew the salute had any deep historical meaning that he never would have done it in a million years. Ewald Lienen, the manager of AEK Athens, stuck up for his players by saying that the youngster is guilty of being ignorant of the past and nothing more.

Lienen, who hails from Germany, said Katidis is just a young man who is out of his teenage years and doesn’t have any political ties or beliefs. He added that the player probably saw a Nazi salute on television or the internet and didn’t know that it symbolized hatred or anything else.

However, fans of the soccer club don’t necessarily the manager’s views and many of them are insisting that AEK gets rid of Katidis from the roster. It’s expected that officials of the club will get together in the next few days to decide what to do with Katidis.

Due to his age, it’s certainly possible that Katidis didn’t have a clue what the salute meant. The Nazi regime was decades ago now. If youngsters don’t learn about such things in school it’s entirely possible they could live their lives without knowing the historical meaning of certain things.

Check out www.bet365.com for the latest lines on world football. 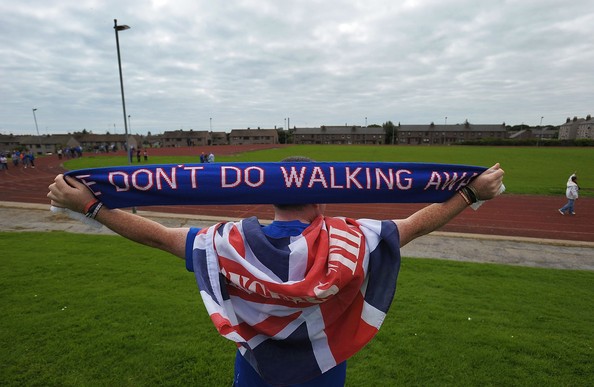 Growing up watching Rangers I was used to the club winning titles and being at the top level of Scottish football alongside Celtic. Only five years ago the club embarked on a wonderful run to the UEFA Cup final. However, those perceptions all changed last year when the club entered administration and then ultimately liquidation.

The financial meltdown that occurred meant that from season 2012-13 onwards the club would have to work their way back up through the divisions, starting in SFL Division Three. Players that had been heroes to fans such as Allan McGregor and Steven Naismith decided to walk away, while others such as Lee McCulloch and Lee Wallace were lauded for staying for the fight.

At the time of writing, Ally McCoist’s side sit 20 points clear at the top of Division Three and the title should be wrapped up in the next couple of weeks. In any normal season, this would be considered a success and it can’t be denied that the club have certainly achieved their first objective for this season. However, the journey has been far from plain sailing and many fans are now asking what direction the club is going in and whether McCoist is the right man for the job.

In truth, Rangers players have never looked comfortable in their new surroundings in Division Three. To a certain extent, fans were prepared to forgive early slip-ups on the road at Peterhead, Berwick and Annan as everyone got used to visiting these grounds.

However, the 1-0 defeat to Stirling Albion in October was a watershed moment, especially since it came only ten days after Rangers best performance of the season when they defeated Motherwell (who currently sit 2nd in the SPL) 2-0 in the League Cup at Ibrox. Fans were outraged that this away day hoodoo had still to be broken against part-time footballers, considering players such as Ian Black, Dean Shiels and David Templeton had been brought in from SPL teams on SPL wages.

The management at the club seem happy to promote a mantra of ‘just do enough to win each game’ rather than trying to implement a lasting footballing philosophy at the club. Young players such as Lewis MacLeod, Barrie McKay and Fraser Aird have impressed, but there has still been too much of a reliance on experienced players doing the job. Many fans including myself would be happy with a team made up completely of Murray Park graduates.

The home defeat to Annan last week was arguably the worst in Rangers history and following on from further draws in 2013 at Ibrox to Elgin and Montrose, fans were rightly angry at players losing to a team that only train twice a week. Compare Rangers to Gretna in Division Three in 2004/2005 and you start to see how poor Rangers have been. Gretna won 32 out of their 38 games, scoring 130 goals in the process. This is exactly what Rangers should have been doing but instead they have looked vulnerable just about every time they have taken to the pitch.

The news that Rangers main signing targets once their embargo is lifted in September are SPL players such as Jon Daly, Nicky Law and Cammy Bell hardly get fans overly excited. Younger players should be brought in to be developed for the top league and then sold on at a healthy profit.

There isn’t a Rangers fan out there that doesn’t want Ally McCoist to succeed as a manager considering his 355 goals as a player as well as becoming something of a statesman last year in ensuring the club was held together along with the fans. However, he does seem tactically naïve and has been soundly beaten by Inverness and Dundee United in the cup competitions as well as losing to Queen of the South at Ibrox in the lower league Ramsdens Cup. 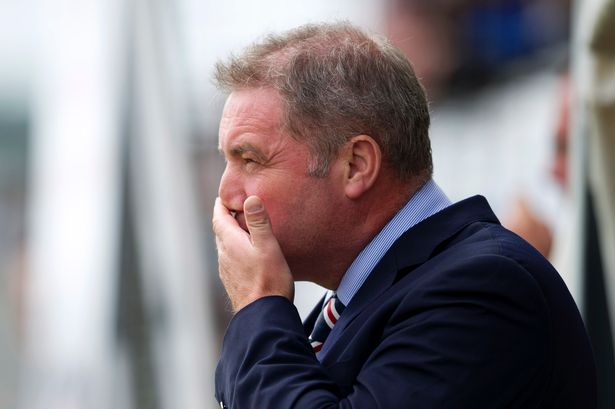 McCoist…. fantastic player, not so much as a manager.

Being brutally honest, I can count on one hand the number of great performances under McCoist during his time as manager since May 2011. It might be unfair to judge him until his hands are untied from the transfer embargo but arguably only Lee Wallace, Sone Aluko and Carlos Bocanegra have been successful signings that McCoist has made.

The league will be won but there are far bigger issues surrounding the club at the moment and the summer needs to be used very wisely. This time the club will have a pre-season and hopefully there will be a more positive style of play introduced for next season. If not, then McCoist could well be collecting a P45 and the club could soon be in a sense of limbo again.