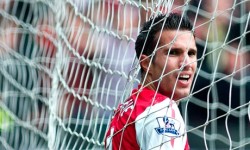 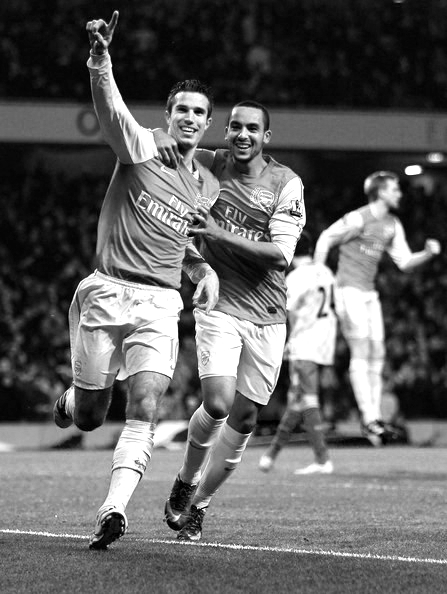 It hasn’t been easy, speaking from an Arsenal point of view, watching your former lethal striker do so well in another club, especially for your rivals. His name is Robin, and he was like the perfect idol.

It has been over three months since Arsenal sold Robin Van Persie to Manchester United for a fee believed to be around £24 million. His departure also saw the arrival of former Montpellier and French international striker Olivier Giroud, who I won’t be so quick to criticize.

After all, given the fact it is his first season at Arsenal, his goals so far this season has been quite encouraging from a statistical point of view. But sadly, he is nowhere near to Robin. He would also fall behind Rooney and even Chicharito in the pecking order at Manchester United - making the Manchester City starting 11 is also a huge doubt.

For example, we have seen decent chances that Giroud has failed to convert and we find ourselves frustrated and then admitting “Robin would have scored that “. I’ve been guilty of saying that, and I will continue to do so until something is done about the strike force situation at Arsenal.

Don’t quote me wrong. I am not saying Giroud is not worth playing for Arsenal, in fact his brilliant scoring record and eye for goal hasn’t gone unnoticed. Scoring  14 goals so far and over 7 assists for a striker in his debut season at the club isn’t that bad to say the least, but he hasn’t really shown any sign of replacing the incredible work Robin has rooted and replacing a striker of his calibre was definitely going to be a difficult task.

The sale of Robin Van Persie has left a big (very big) vacuum to Arsenal, especially in the striking department as Olivier Giroud, as I mentioned, is  struggling to produce the magical touch Robin had, despite having a good scoring record in his first season so far at the club.

Robin’s eye for goals and brilliant technique makes you ponder if this guy is really human. All you need to do is create the chance and leave Robin to handle the rest. When Arsenal need an equalizer or maybe a winning goal, he usually provides them. Also, not forgetting the fact that he is a consistent player and can bring positives out of a negative game in a matter of seconds.

He did that against Liverpool and Everton, his curling effort against Tottenham, and the list goes on. His tally of 37 goals out of Arsenal’s total of 95 goals in all competitions in the 2011/2012 season, is a testament to his undeniable talent and outrageous ability.

I have to say that I am not really surprised Robin has adapted at his new club. He is a consistent player and he is showing the same fate at his new club. He’s also a genius who is ready to fight, and provided his full commitment in his time at Arsenal. The downside was, he was never patient. He is a big player, and big players have massive “egos”. They dictate what they want, and if you display some of sort of opposition they would most likely depart in a moment’s notice.

Van Persie’s former manager, Arsene Wenger, had this to say about big players and “egos”:

“Can you become a big player without a big ego? I would say no, it’s impossible”

As much as Arsenal fans won’t hide their bitter frustrations on losing Robin to Manchester United, I would suggest Wenger should have done more to keep his big man. Rooney almost quit United after some behind the scenes outbursts with manager Alex Ferguson, with Mirror football quoting “Rooney to leave United after outburst with Ferguson beyond repair “.

The major difference between Alex Ferguson and Arsene Wenger is Ferguson’s way of understanding big players who have massive egos, and that you need to act and rise to their level to keep them at your club. He did the same on this situation, and Rooney stayed.

It still saddens me that he left, but he has clearly stated his desire to win trophies which Arsenal have failed to provide.

Arsenal lost a leader, talisman, a born goalscorer and a fighter. If Arsenal fail to finish in the top 4 this season, only then would the cost of his departure be very clear. Only then. 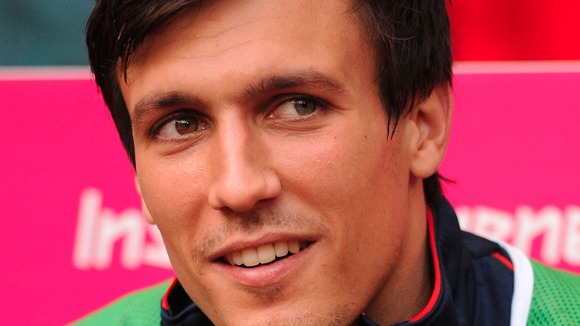 Southampton’s first season back in the Premier League started slowly for Jack Cork after an injury ruled him out until November, but his return to fitness has seen him develop, together with Morgan Schneiderlin, a strong centre-midfield partnership charged with the task of keeping the Saints in the top tier.

With Schneiderlin providing the energy and drive in the defensive side of the duo, we have a look at what the 23 year old Cork brings to the table.

Cork is a Chelsea academy graduate having joined their youth set up aged 9 and going on to captain both the youth and reserve teams. Despite travelling, and playing, on Chelsea’s pre-season tour of America in 2007, the midfielder failed to make any first team appearances for the Blues and spent the majority of his five years in west London out on loan. 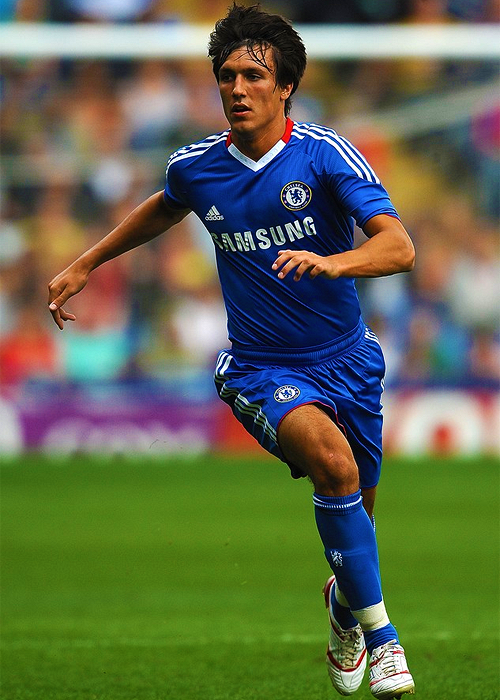 Temporary spells with Bournemouth, Scunthorpe, Southampton, Watford  and Coventry in the lower leagues, it was finally Burnley and a half-season loan spell in 2010 that exposed him to Premier League football. The Clarets failed to stay in the division but managed to secure Cork for a further year in the Championship, where he enjoyed a fruitful season, playing forty matches to establish himself as one of the most promising players in the Championship.

Chelsea had made it clear a year previously that they wanted to sell Cork and his form at Burnley sparked a bid from Southampton for £700,000 in the July of 2011. After joining the south coast club, Cork’s impact was immediate, playing in every single league match as Nigel Adkins’s side earned promotion back to the top, and striking up a solid partnership with Schneiderlin , who missed just four games in that promotion year, that has carried on to this year. 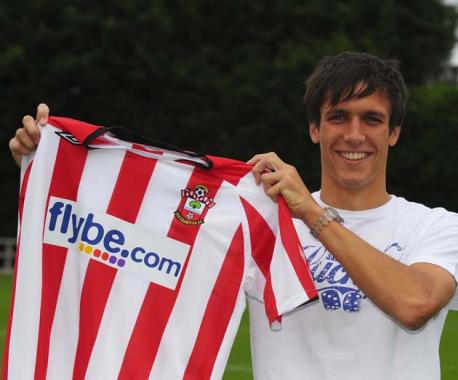 Despite an ankle injury, picked up in a pre-season match against Bristol City, curtailing his first few months of the campaign, him and Schneiderlin have managed to form the solid backbone to a midfield that has driven Southampton to a good chance of survival with eight games of the season remaining.

It is indicative of how much the Saints missed Cork at the beginning of the season as they lost 8 of their first 10 matches. The duo has now featured together 20 times and has remained consistent through the managerial change from Adkins to Manuel Pochettino in January.

Cork’s form and reputation for possessing technical quality in the heart of midfield has also seen him establish himself in the England under 21s after representing the national side at every previous youth level. He also received a call-up for the under-23’s in last year’s London Olympics, playing three times for Stuart Pearce’s side as they were eliminated in the quarter-finals.

Schneiderlin and Cork have acted as the central midfield duo in Southampton’s 4-4-2 system that was favoured by Adkins and has verged into a 4-2-3-1 under Pochettino. Whilst Schneiderlin focuses more on the “uglier” side of the partnership with his tough tackling and superb reading of the game, it is down to Cork to pick up the ball and distribute it from his deep position alongside his French partner.

Cork averaged the most passes per game in the Southampton side under Adkins with 53.6%, dropping deep to provide the link between the defence and attack with his wide range of passing, as well as enabling the full-backs to move forward on either side in order to provide further width. 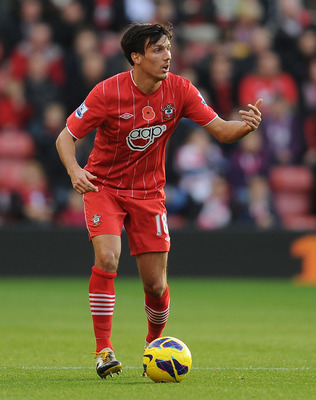 His positioning off the ball was deep under Adkins, in a move designed to ease the defensive burden on Schneiderlin in a league where they would face the free roaming talents in the Ilk of Juan Mata and Santi Cazorla.

With the duo sitting, usually behind the attacking force of Gaston Ramirez, they could avoid being drawn out of position by the opposition, allowing them to be rigid in terms of offering protection to the defence; it is no coincidence that they have lost just five games since Cork’s November return, with their defence cleaning up dramatically with five clean sheets after registering none in their first ten league games. In the 18 games they have played together, Southampton have lost just 5.

Under Pochettino however, the two players have been pushed higher, with Cork still the deepest but lying on the half-way line behind his partner, who has been instructed to push higher up in keeping with the Argentinian’s emphasis on a high pressure game. The Frenchman’s rabid style of charging around his midfield area looking for the ball is supplemented by Cork’s calmness alongside him, waiting for the second ball to come free in order to launch an attack with his fine vision on the ball.

Cork’s discipline and presence behind him has allowed Schneiderlin more freedom to join the attack to operate off the knock-downs of Rickie Lambert, hence his five goal (his most ever in a campaign) haul this year. 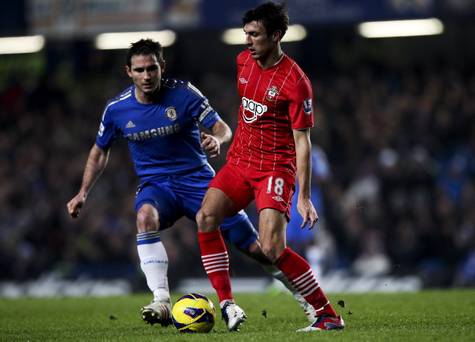 Cork….. cool and unfazed under pressure.

Cork’s positioning behind Schneiderlin gives safety to the midfield in the knowledge that if the first barrier of press is breached, Cork is there to win the ball back in his withdrawn position, his 61% challenge success rate suggests he can win the ball back strongly and move it forward with his 83% passing accuracy. His 19 chances created this season shows how positive he is with the use of the ball.

With both of Southampton’s 23 year old central-midfielders displaying intelligence in terms of defensive positioning and a good technical ability which allows for quick movement of the ball, which is vital to Pochettino’s fast counter-attacking philosophy, it is a promising partnership that the St Mary’s club will be hoping that will be around for years to come.

Such is the excellence in understanding they have both performed with this season, that may hinge on whether they can stay in the Premier League, but with the Anglo-French partnership of Cork and Schneiderlin, the beating heart of Southampton’s well-drilled system, they will have a massive say on whether that will happen or not.