The Arsenal Annals: Why Wenger “must” make new signings before deadline day 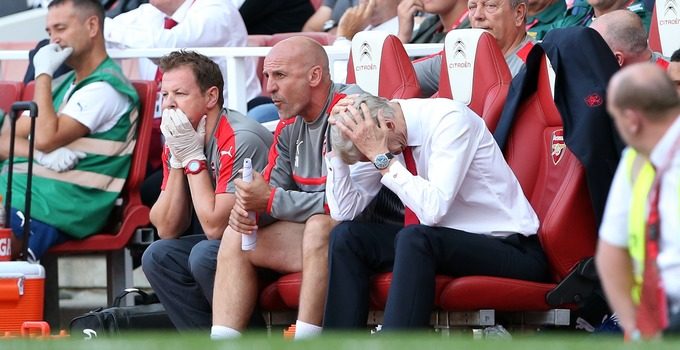 The Arsenal Annals: Why Wenger “must” make new signings before deadline day

Arsenal succumbed to a humiliating 4-3 home defeat to Liverpool in their Premier League opener.

Although their season is far from over — at least for now — heading into the second league game in the wake of a victory would have catastrophically boosted their confidence.

Having said that, they now travel to Leicester City, who are equally, if not, more desperate for their first win, with uncertainty over many things, the most uncertain thing being the ability of the back four to keep the Leicester attack in check.

The uncertainty over Arsenal’s defence stems from their lack of signings.

Calum Chambers and summer arrival Rob Holding certainly possess the tools to become Arsenal’s first-choice centre-backs in the future, but as things stand, they hardly stand a chance against the league’s heavyweights, and barring Philippe Coutinho’s beauty, Liverpool’s goals bear testament to their inadequacy.

Per Mertesacker’s long-term absence was confirmed in July whilst Laurent Koscielny was always expected to be handed an extended vacation because of his European Championship toils.

Gabriel Paulista added insult to the injury, sustaining an injury in early August, which will likely keep him on the sidelines for a few weeks.

That desire, more often than not, uplifts the team’s spirits, as is evident from Sadio Mane’s enthusiastic run that led to Liverpool’s fourth goal — the goal that eventually separated the sides.

With Arsenal’s short-term future looking as uncertain as it has ever looked under Arsene Wenger’s regime, a new top-class signing could elevate the Arsenal camp’s mood.

Should the new arrival turn out to be a striker, whose performance will directly influence the numbers the Gunners put on the scoreboard, the mood around the Ashburton Grove will change drastically.

Besides, the arrival of a top-class player could also avert the birth of complacency in Arsenal players.

Olivier Giroud, for an instance, will head into his fifth season as Arsenal’s undisputed first choice centre-forward if the N5 club fail to bring in a centre-forward.

Knowing he will start irrespective of his performance level will lead to his losing the drive. Fighting with a new centre-forward, who will likely be keen to make a name for himself at Arsenal, for a place in the starting line-up will only bring the best out of the French striker.

With no world-class striker available in the transfer market, however, Arsenal are linked with Alexandre Lacazette, who could not even nail a place in France’s European Championship squad.

Lacazette… a player Wenger should seek.

However, Arsenal should bring him down to the Emirates – the player is interested in a move, reportedly – to augment the size of the first-team players list.

As his scoring record in Ligue 1 proves, he is no Alexandre Pato-esque signing either; he may as well become Arsenal’s Loic Remy, at the very least.

However, given Arsenal’s plight, although signing a striker is the bare minimum requirement, failing to sign a centre-back could have serious consequences.

According to Guillem Balague, reported target Shkodran Mustafi is available for £26 million, and even if Arsenal, as reported by David Ornstein, are determined to hold back funds for a potential striker signing, that amount is not astronomical.

Announcing Mustafi is a must.

Wenger’s personnel may be physically ready, but in order to be psychologically ready, Arsenal should make at least a couple of signings before the transfer window slams shut on August 31.