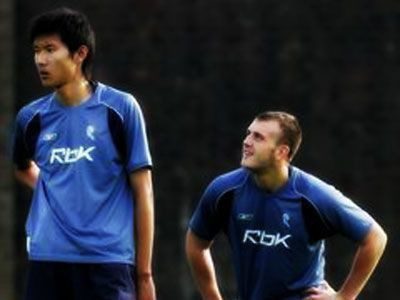 Football players come in all shapes and sizes. Their physical attributes can often, but not always, determine how and where on the pitch they play. From towering goalkeepers to target-man strikers, from miniscule midfielders to pocket-rocket wingers, here are the shortest and tallest football players playing professional men’s soccer today.

Next up are the Norwegians. Striker Tor Hogne Aarøy (2.04m) currently plays for Norwegian second division club Aalesunds FK. His fellow countryman and striker Øyvind Hoås (Hønefoss) is only a fraction shorter at 2.03m, as is Hasle-Lören IL defender Even Iversen and goalkeeper Kjell Petter Opheim. Completing the quintet is AS Monaco’s Lacina Traore also at 2.03m (6ft 8 in).

The world’s tallest football player list is wrapped up with a more familiar name in Serbian centre forward Nikola Žigic, who is a powerful striker for England’s Birmingham City measured at a height of 2.02m (6ft 7½ in).

To put these giants of the game into perspective, towering Stoke City striker Peter Crouch measures in at 2.01m (6ft 7 in).

Height profiles for the world’s shortest football players seem to vary depending on the source – official club websites often differ from other soccer stats resources. However, Brazilian attacking midfielder Élton Jose Xavier Gomes, who plays for Saudi Arabia’s Al Fateh, would appear to take the accolade for top-flight football’s shortest player at only 1.58m (5ft 2 in).

A whole host of footballer’s measure in at between 1.60m and 1.63m (5ft 3 in - 5ft 4 in), many of them technically gifted South American midfielders like Elton. The Brazilian contingent of shortest football players comprises Madson (5ft 3 in), Carlinhos Bala (5ft 4 in) and Joãozinho (5ft 4 in).

One of the few Europeans to challenge for a position amongst the world’s shortest soccer players is English midfielder Levi Porter. Porter, currently contracted to Shepshed Dynamo playing at the semi-professional Midland Football League, is 1.60ms (5ft 3in) tall.

Lionel Messi, World Football Player of the Year and Ballon d’Or winner, is not the tallest of footballers. However, at 1.69m (5ft 5 in) he is still some way off from joining the ranks of the world’s shortest football players.