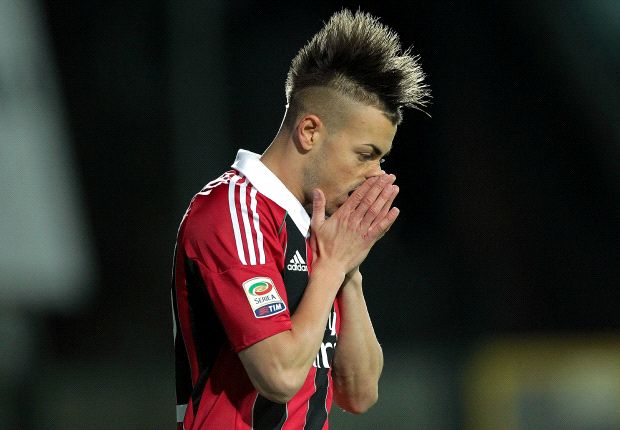 “I believe in the project of Milan, Mihajlovic made a good impression on me”, was Stephan El Shaarawy’s reaction to meeting Sinisa Mihajlovic, named the new manager of AC Milan in the summer, and the talk of the Serbian introducing a 4-3-1-2 at the San Siro generated much excitement and optimism that Il Faraone could get his career with the Rossoneri back on track after two seasons of injury trouble.

Flash forward six months and Mihajlovic is on the brink of becoming Milan’s fourth managerial casualty in two years while El Shaarawy is halfway through a loan spell at AS Monaco that began in July.

The Italian forward has scored no goals in those six months and Monaco, now watching the purse strings as owner Dmitri Rybolovlev has reined in the free-spending, have left El Shaarawy standing on 24 appearances as one more would require the Principality club to purchase the player permanently for €13 million.

El Shaarawy, still registered to the club for whom he scored 16 goals three seasons ago, is now in limbo. The attacker turned 23 years old in October and has the choice of watching from the bench in Monaco or returning to Milan where he would be likely to experience another period of upheaval, neither option will help El Shaarawy cement his place in Antonio Conte’s Italy squad for the summer’s European Championships in France.

A third avenue has presented itself to the Italian however, with AFC Bournemouth attempting to add their own chapter to this ever-maddening tale of a Premier League season by launching an audacious loan bid for the winger.

Bournemouth, having escaped from the abyss of pending-administration and relegation to the non-league as recently as 2009 before embarking on their remarkable run to the top-flight under Eddie Howe, sit four points clear of the relegation zone and with the smallest wage bill in the division have given themselves a fighting chance of staying up.

Avoiding relegation would give the Cherries a slice of the £5.13 billion television deal that kicks into play this summer and with such a windfall looming, it has allowed them to plough their resources into landing eye-catching deals for Juan Iturbe from Roma on loan before now targeting El Shaarawy.

Realisation of the reality he’s in

Should El Shaarawy follow Iturbe from Italy to the southern coast of Dorset, he will bring with him the realisation that the less affluent clubs in the Premier League now pack the financial muscle to lure established Italian national players.

El Shaaraway, with 17 caps for the Azzuri, earns £2 million per year at the San Siro but it is now accepted that the likes of Bournemouth, playing in the English top-flight for the first time in their 126 year history, can compete economically with 18-times winners of the Italian title AC Milan.

Moving on from rationalising the move economically, the move would also make sense practically with Bournemouth offering El Shaarawy the opportunity to play himself back into some much-needed form after seeing the last two years blighted by struggle.

Back in 2012, with El Shaarawy announcing himself to the world stage with 14 goals for Milan across the first half of the season following his €20 million arrival from Padova the year before, The Guardian had the Italian at 52 on their list of the 100 best players in the world.

The Italian was only 20 and being billed as Milan’s next great hope but what followed was foot surgery and a series of metatarsal fractures that limited the attacker to just 28 appearances across the next two campaigns.

Only three goals came in that period and one of them, a wonder strike against Sampdoria that ended a 622-day goal drought, saw the frustration vent out of the Italian in the form of uncontrollable tears as he collapsed to the floor.

Milan’s decline has coincided with that of their young striker’s however and after Massimiliano Allegri, Clarence Seedorf and Filippo Inzaghi all tried and failed to get El Shaarawy back on track, Mihajlovic turned ruthless and packed him straight off to France.

With his electric bursts from the wing and skilful incision from the flank that illustrated his game when he first broke through now curtailed as injuries have taken their toll, El Shaarawy has no goals or assists from his time with Monaco and his eccentric patches of form make him a difficult commodity to sell on for a future club.

That makes Bournemouth’s interest intriguing as it will represent a low-risk move for the player, and for the club who have a variety of exciting options already in-place in attack, as he attempts to salvage his career.

El Shaarawy’s time at Monaco was instantly forgettable though he will look back with favour on how it earned him a recall to the Italy squad, with whom he ended a goal-drought of three years by netting in Azerbaijan to help the Azzuri qualify for France 2016.

Conte will await his next move with even more keenness then most onlookers, but he should not be surprised if his next destination is the 11,000-seater Goldsands stadium on England’s south coast.