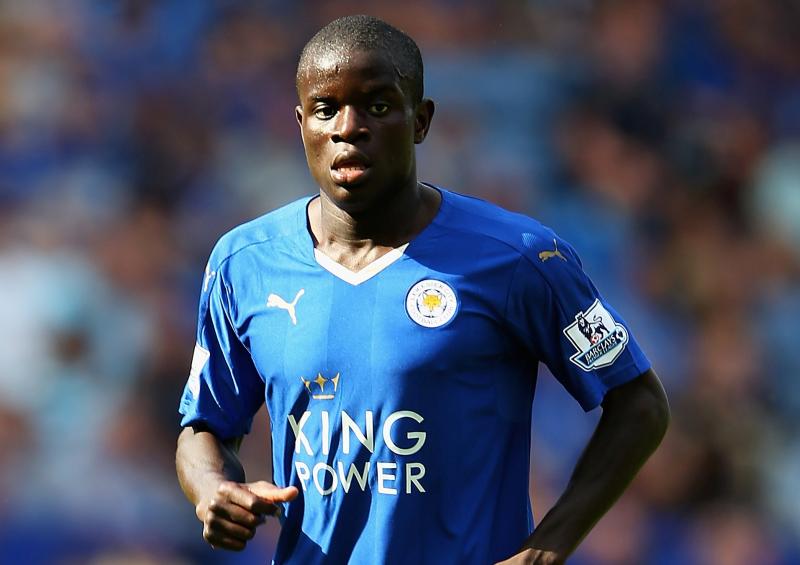 There was a sense of deep worry among Leicester City fans back in the summer who, after the Foxes had survived via a late dash out of the relegation zone last term, dismissed manager Nigel Pearson and replaced him with Claudio Ranieri, with the latest entries on his C.V distinctly underwhelming.

Esteban Cambiasso, so pivotal in their survival, then decided not to renew his contract and Leicester, shorn of the Argentine’s experience and leadership and staring at a potential period of instability following the sacking of Pearson, were made favourites for relegation, at 4/1 they were shorter than Aston Villa.

If Ranieri was positive enough about his new job to avoid taking those odds, the Italian was doing his own gambling in the form of signing N’Golo Kante, who had previously only played one season in France’s Ligue 1 with SM Caen, for £5.6 million as a replacement for Cambiasso.

Kante was first spotted by Ranieri’s assistant and the club’s head of recruitment Steve Walsh, responsible for luring Jamie Vardy and Riyad Mahrez to the King Power stadium in recent years, but few could have foreseen the impact the young Frenchman would have in his first year in England.

The excellent duo of Vardy and Mahrez may be grabbing the headlines in Leicester’s extraordinary campaign which posts them second in the table after 20 matches, but Kante deserves his share of the plaudits as he keeps Gokhan Inler, signed from Napoli in the summer for £5 million, sitting firmly on the bench.

Kante has made more interceptions than any other Premier League player with 81 and only Erik Pieters of Stoke has been more successful in the tackle than the Frenchman who has won 47% of his 58 attempted challenges.

Stationed alongside Danny Drinkwater, another unsung hero in Leicester’s transformation into gate-crashers of the league’s elite, Kante is the destructive force who hunts for the ball, usually wins it back and, with the opposition sucked up the pitch, releases the frenetic counter-attacks of Vardy, Mahrez and co.

On average, Kante manages to win the ball back almost eight times per match and is known by Drinkwater as “the rash” for his determination to cover every blade of grass in the chase to retrieve the ball.

Playing as a combative midfielder, the quality of his passing will go understated. He posts the best pass completion rate in Leicester’s squad with 82.5% and it was his vision that directed a sweeping diagonal ball to set Mahrez up to bag one of his goals in the 0-3 rout at Swansea while a driving run and measured through ball provided Jeffrey Schlupp with his goal at Norwich.

For Vardy’s strike in the home win over Chelsea it was Kante popping up in midfield to seize a loose ball and initiate the quick shift into attack mode. Given all of the Frenchman’s energy, and there is an abundance of that considering he has featured in all of Leicester’s league games so far and still managed to put in another industrious performance in the 2-2 draw at Spurs in the FA Cup, there is a clear footballing intelligence and understanding of the best time to move the ball on.

Perhaps this should have all been forecasted with Walsh recommending Kante to Ranieri off the back of a campaign in which the 24 year old was the leading interceptor and tackler in the whole of Europe.

One will wonder, when bigger clubs inevitably show an interest in the Frenchman, which has not yet happened with Leicester casting glances at a genuine charge for the title and awaiting their share of the impending mega-money TV rights deal, why he was not initially on their radars.

There seems to be a growing habit among the Premier League elite, prevalent in Manchester United’s £30 million pursuit of Saido Mane and in rumours now linking Mahrez with a move away from Leicester, to ignore the chance to unearth these gems directly and allowing them to join lower-range clubs to establish themselves before meeting a valuation that can be triple the original fee.

Not that it will bother Leicester too much; they should pocket themselves a huge profit if Kante continues this vein of form and they are eventually forced to sell.

If he does continue then, incredibly, Kante could be having a Premier League winner’s medal placed around his neck in May while a place in Didier Deschamps’ France squad for this summer’s European Championships may also be a possibility, despite the 24 year old not being capped by the country of his birth at any level yet, an amazing stat when considered he is also eligible to play for Mali.

Ranieri’s Leicester are being richly rewarded for taking the punt on the unfancied Kante when most of Europe found themselves looking the other way, it is vital Les Blues don’t make the same mistake in missing out on this wonderfully talented midfield workhorse.

The name Kante now though, simply can no longer be ignored.