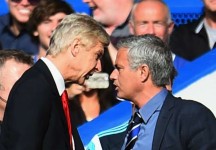 This week’s football puzzle sees London rivals Arsenal and Chelsea go head-to-head in our popular crossword face-off. So if you think you know your Lampards and your Limpars, come with us on another puzzle adventure!

8 Which Chelsea defender was infamously bitten by Luis Suarez in 2013? (8)

20 After missing out on 11 across, Mourinho signed Essien from this French club (4)

Talented footballers seem to be growing thick and fast in Norway these days. 17-year-old Sander Svendsen, who The Guardian last year tipped to become “the next great Norwegian footballer”, has already received international plaudits for his talent.

On their list of the world’s greatest talents born in 1997, Svendsen was the only Norwegian player to be included by The Guardian. As a forward for Molde he is currently playing his third season in the highest division in Norway – and is considered a talent to watch in the coming years.

With his great pace and excellent ball control he has already become a favourite among the locals in Molde. Norwegian pundits describe him as a ‘fearless and hard-working goal machine with a massive hunger to succeed’, while Norway’s Under-21 manager Leif Gunnar Smerud compares him to Argentina striker Carlos Tevez.

Molde captain Daniel Berg Hestad, who got his debut for the club four years before Svendsen was even born, believes the 17-year-old has all the attributes to make it at the highest level.

“The talent is clearly there. Sander is a wise and serious player, who is willing to listen. He will make it very far if he continues like this,” Hestad said according to The Guardian.

At the age of 15, Svendsen was handed his debut by former Cardiff City and Molde FK manager Ole Gunnar Solskjær. He may only have got 10 minutes over two appearances in the 2013 season, but it was an introduction that kept the Molde fans on their toes over the winter break.

The following season he impressed in a Molde team that won Tippeligaen, scoring his first goal and becoming the youngest player in the history of Norwegian football to be crowned champion. With 12 appearances and 302 minutes he took another valuable step towards what is expected to be an impressive career.

After nurturing his talent in the previous two seasons, current Molde manager Tor Ole Skullerud gave Svendsen the opportunity to establish himself in the team – a chance the youngster grabbed with both hands.

He has started 10 of 14 matches so far this season, getting five goals and two assists to his name.

Despite acknowledging his talents, not many clubs have shown a direct interest in Svendsen. The only club to step forward and express an interest in signing him is Ajax. Sander, along with his younger brother Tobias, has been in Amsterdam to train with Ajax on multiple occasions.

Multiple clubs across Europe are monitoring the brothers closely and a move abroad might be on the cards sooner rather than later.

Rivaldo Coetzee may only be 18-years-old, but he is almost already a seasoned professional at both club and international level. The South African teenager, who plays for Ajax Cape Town, made his international debut at just seventeen in 2014, and has been a constant fixture in the national set-up ever since. And of course, with a name like Rivaldo, being a football star seemed to have been written in the stars.

When Rivaldo Coetzee made his debut for South Africa against Congo in October 2014, he became the youngest ever player capped for the country. It was a meteoric rise for the young central defender, who had only just played a few months of senior club football.

Like most players who come through the Ajax system, Rivaldo is a well all-rounded player, who does most of the basics right. As a young defender though it is his overall reading of the game that is impressive. His positioning is excellent, and is hardly ever caught out of position. He is also very aware of what is happening around him, and keeps an eye on both the opposition and his team, very often covering for an out-of-position team-mate.

While he may not be the tallest centre back, he is still growing, and is solid in the air. His man marking is strong, and he times his tackles very well.

Since making his debut in the second half of the 2013/14 season, Rivaldo has made 37 club appearances for Ajax Cape Town (league and cup), and has only ever picked up three yellow cards, a decent stat for a defender. This is all the more impressive because for a large part, he has partnered with another young defender, Abbubaker Mobara.

Coetzee was also a regular member of South Africa U17 and U20 teams until he made his senior debut. He was part of the teams that won both the All Africa Games in 2012, and Cosafa U20 Championship in 2013. He is yet to score a goal at a senior level.

Due to Ajax Cape Town’s affiliation with Ajax Amsterdam, it has long been predicted that Rivaldo would join up with the Dutch club sooner rather than later. He has been on their radar since he was sixteen. He has also been a ‘guest player’ for Amsterdam’s U19 team at a few tournaments.

But ever since his debut for the national team, and being focussed on in the Football Manager documentary ‘An Alternative Reality’ in 2014, Rivaldo has also been linked to moves to Portugal, Belgium and England. However due to international regulations regarding work permits (and age), much of the talk has been about future moves.

“About my future, I’m still a young boy and I must stay humble and learn as much as I can. But I would love to have the chance to play in Europe one day.” - Coetzee said in November 2014.