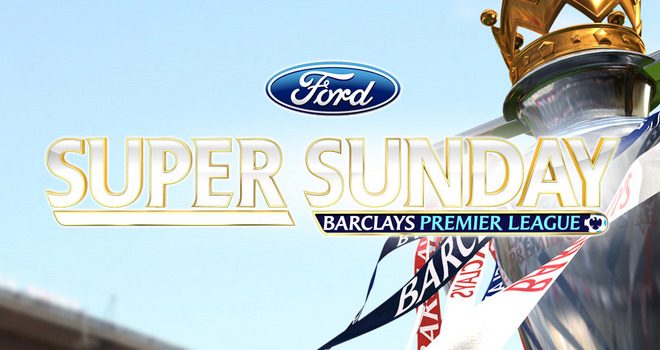 Its here. The first Premier League Super Sunday of 2013, and Sundays do not get much more super than the fixtures that await us on this chilly Sunday 13th. The ascendancy of the noveau riches may have altered the order of power at the top end of English domestic football on a permanent basis, but for this soppy writer at least, Manchester United versus Liverpool remains the quintessential date in the league calendar. As a lower-division supporting neutral, the M62 derby is the first match I look for when the fixture lists are produced each close season.

The two most successful clubs in the land, 37 titles between them, 8 European Cups, hundreds of millions of fans worldwide, if an alien who knows nothing about football - or Tom Cruise - popped down to catch a game to get up to speed with what all the fuss is about this Premier League malarkey, you’d hope that this would be the game that he - or Tom Cruise - popped down for. Passion, history, quality.

And the match afterwards isn’t bad either as the champions travel down to the Emirates minus their midfield lynchpin, striking talisman and ex-Gunners playmaker. Add to the mix that Manchester City have not recorded an away league victory against Arsenal for 38 years and you are guaranteed a major story to come out from North London this afternoon.

First things first, and the league leaders simply have to be favoured to snap up the three points which will bring a 20th league title tantalisingly closer to Old Trafford. At the time of writing, United are available at odds-against to defeat their bitter rivals, a price which in my eyes represents staggering value. Sir Alex Ferguson’s men are 21 points ahead of Liverpool in mid-January, having won nine of their ten home league matches this season. They have scored in every one of them, scoring at least twice on each occasion barring the 1-0 victory over West Ham in November.

In other words their Merseyside opponents, who have been victorious on the road in only three of their ten attempts this campaign, will almost certainly have to score at least two goals today to avoid defeat. Liverpool have achieved this feat only three times this season, albeit two of those matches were their most recent away league games, against QPR and the Hammers.

However, trips to Loftus Road and Upton Park are a significant step down from a daunting journey to Old Trafford, where Liverpool have suffered four successive league and cup defeats since a Benitez and Torres-inspired 4-1 mauling of the Red Devils in 2009.

Both Spaniards have changed allegiance to Chelsea since, and while the Blues will be hoping Liverpool can do them an unlikely favour in opening up the title race with a rare away win, there is simply too big a gulf in class. United have been scoring an average of a goal a game more than Liverpool all season (whilst both teams boast similar defensive records) and if Ferguson’s declaration that Wayne Rooney will not make today’s match due to a nagging knee injury is fact as opposed to curveballed kidology - he has plenty of form in that respect - then it is not as if there is a shortage of options to make up for the loss of the Scouser.

Ferguson can utilise the pace of Javier Hernandez to pair up with key man Robin van Persie, or the physicality of Danny Welbeck to rough up Liverpool’s bouncer-like centre-back pairing of namesake Agger and Martin Skrtel. The most likely eventuality, though, is that Shinji Kagawa will be deployed in the number 10 role which Rooney has developed into smoothly over the last few months, acting as an effective conduit between van Persie up top and his midfield, the only area of the park where this Liverpool side can hold a candle to United.

In the reverse fixture in September which United won 2-1 at Anfield, Liverpool were admittedly running the early exchanges of the game via the midfield, with Jonjo Shelvey the best player on the park until his sending-off for a rash tackle. Expect Shelvey to again link up with Joe Allen and captain Steven Gerrard in the centre of the pitch, with the remit from Brendan Rodgers to consist of bossing Tom Cleverly and Michael Carrick.

No easy task at Old Trafford however, especially with Cleverley maturing by the game and Kagawa having the legs to essentially become a quasi-box-to-box-midfielder, albeit with more emphasis on appearing in his opponents box than his own. He mastered this role with distinction in his illustrious last couple of seasons at Borussia Dortmund, and can demonstrate his attributes to great effect today.

The gulf between United and Liverpool may well be illustrated to its maximum out wide, where young full-back Andre Wisdom will be issued the daunting task of keeping a marauding Ashley Young quiet in the absence of the injured Jose Enrique. The saving grace for Rodgers, of course, is the form of their controversial yet undeniably brilliant forward Luis Suarez, and he has proved in the past that he doesn’t shirk the big occasion having produced some top performances against United since arriving on these shores.

However when you look a little closer into the background of those fixtures, its not all it seems. His man-of-the-match performance in Liverpool’s last league victory against United in March 2011 was in the absence of Rio Ferdinand, Nemanja Vidic and Johnny Evans, while the United captain was also absent with injury when Suarez notched at Old Trafford last season.

Perm any two from the aforementioned three defenders to start today, and the talented Uruguayan will have a tough task on his hands in front of what will undoubtedly be an extremely hostile Mancunian crowd. Daniel Sturridge is not match-fit. Liverpool fans haven’t seen their side beat a top-ten team all season and will head down the M62 this afternoon in hope as opposed to expectation, as all roads lead to a United victory with the starring role set to be afforded to the man from the land of the rising sun.

Kicking off at 4pm is the small matter of Arsenal versus Manchester City. The champions are languishing somewhat seven points behind their neighbours in the table - a gap which may go into double figures by kick-off time - but they have proved themselves to be the hardest team to beat in the league away from home. They can boast the fewest number of away defeats - just the one at Sunderland on Boxing Day - and just the ten goals conceded in as many away matches. Only Swansea and today’s opponents have conceded less on their travels.

Both Arsenal and Man City can boast durability away from home, and at terra firma both sides have scored 25 goals so far this season, although this record is more impressive in respect of the Gunners as they have played two home games fewer than City at this moment in time. In fact there is not a lot in it when it comes to the goal statistics, with Arsenal having scored only one goal fewer whilst playing a game less, and conceding only three goals more.

The main reason it seems for Arsenal lagging eleven points behind Man City in sixth place is their propensity for drawing games of football. Only draw specialists Everton have endured more stalemates out of the top eight teams, and today could be another day for shared points. There’s no doubting that City have the better squad, yet even their not-so-meagre resources will be stretched by the notable key absences of Yaya Toure, Samir Nasri and Sergio Aguero, all for differing reasons.

With Mario Balotelli mentally AWOL, City are down to their last two recognised strikers. Carlos Tevez and Edin Dzeko are not a bad pairing to find at the bottom of your barrel, though. That notwithstanding, Aguero is City’s best striker, Nasri is at his most effective on the counter at away days such as these and Toure is the driving force in the champions’ midfield. There are no ready-made equivalent replacements for those three, and expect City to pit out a more dour formation with unspectacular players such as Gareth Barry and James Milner coming to the fore.

Arsenal are of course not without their problems but they are finding their goalscoring touch of late, and where Arsene Wenger deploys Theo Walcott today will give a massive indication as to how ready the manager believes his young charge is to emulate Thierry Henry in a central striker role.

Walcott should be afforded that chance, and should relish the opportunity to use his pace to snap at the heels of the young City centre-back Matija Nastasic, who has played ably in his first season in the Premier League at the age of just 19 yet has struggled in the bigger games.

With Toure and Nasri absent the midfield battle will be a more even affair as well, with Jack Wilshere working his way back to form nicely, aided in his tripartite partnership with fellow ballplayers Santi Cazorla and Mikel Arteta, the latter of course scoring the winner in the corresponding fixture last season to ensure City’s Highbury/Emirates hoodoo rumbled on for yet another year.

The hoodoo may well be rumbling on to a fifth decade, as a stalemate seems the most likely outcome in this afternoon’s late fixture.