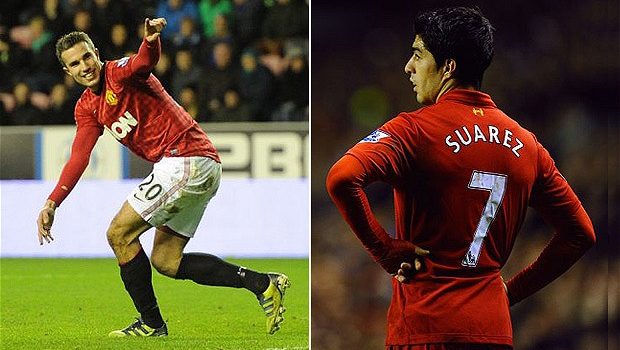 Forget about EL CLASICO (Real Madrid- Barcelona), THE SUPER CLASICO (Boca-River), DE KLASSIEKER (Ajax -Feyenoord) etc. The biggest game in world football is MANCHESTER UNITED V LIVERPOOL and luckily for all of us, football lovers, it is going down this weekend at the city of Manchester (Sunday afternoon).

Matches of this magnitude are always feisty and hotly contested because of the history and pride involved. When Sir Alex Ferguson took over at Manchester United, his long time ambition was to knock Liverpool off their f-king perch as he termed it that time and domestically, he has done that, leading MUFC to 12 EPL successes. Now the red part of Manchester have one more domestic title than Liverpool….something that was seemingly unassailable 20 years ago. However, the Merseysiders still lead the way in Europe with 5 European Cups to their arch rivals 3; something Ferguson has remained distraught about.

But the most puzzling of all, is Liverpoolâ€™s failure to collect at least one of the 20 EPL titles since 1992 when the old English Division cup was renamed. A record that has astonished everyone connected with the reigning CAPITAL ONE CUP champions. This season wonâ€™t be any different as they find themselves a massive 21 points adrift of 1st place which is currently occupied by bitter foes, Manchester United….except Hiroshima repeats itself. The top 4 is some distance away.`

Manchester United go into the game on Sunday in fearsome form and will be determined more than ever to pile more misery on Brendan Rodgersâ€™ men. Despite the absence of the talismanic Wayne Rooney, Sir Alex has the lethal Robin Van Persie to call on for the much needed firepower. A situation that would have been seen as problematic last season. Jonny Evans is in the form of his life and Nemanja Vidic is slowly getting back to his best.

Michael Carrick has been monumental this term and will hope to bring his best into this encounter. Rafa Da Silva has been a revelation and Patrice Evraâ€™s four goals have come in handy. David De Gea is fast becoming that exceptional goal tender we all expected him to be and all in all, the team has what it takes to trouble Liverpool.

Liverpool and Steven Gerard know all about Manchester United and it will be no surprise that they are all pumped for this particular duel. Apart from the burning rage that emanates from Manchester Unitedâ€™s recent successes in contrary to their failures and near misses, the bad blood that exists between Patrice Evra and Luis Suarez might be rekindled on Sunday- despite all of us praying that it will not rear its ugly head.

Football wise, the team from the northwest of England havenâ€™t done so well, so far. A club of Liverpoolâ€™s stature should be sitting among the elite of the EPL, but that has not been the case for a few years now. It has been more or less, a rotten last 2 or 3 seasons for them. They find themselves in 8th place which is absolutely disappointing.

But their consolation is the fact that Luis Suarez the Gunslinger is firing. The Uruguayan has 19 goals this season overall and his 15 strikes in the Premier League is 2nd only to the aforementioned Man United predator, RVP (16). Vidic and co. will have to keep a close eye on him if they are to claim victory on Sunday.

The game will be officiated by the controversial Howard Webb who is among the very best referees in the game. He officiated the â€™10 Champions League final and later the World Cup final in the same year. Liverpool fans were infuriated on hearing the announcement as they have never fared well against their fierce rivals when Webb is in the center.

Martin Skrtel and his defensive partners will have to be at their best to tame the viciousness of Unitedâ€™s attack consisting of RVP, Chicharito, Kagawa etc to have even the slightest chance of claiming at least a draw at Old Trafford on Sunday. Jonjo Shelvey, if fielded, must behave much better than his previous outing vs the Red Devils a few months ago and learn to keep his mouth shut.

New signing, Daniel Sturridge will have one or two things to prove if fielded from the start. Jamaican-English teenage sensation, Raheem Sterling will also hope to impress a few more people with his trickery and outstanding brilliance.

The game will be keenly watched by observers all over the world and it has the makings of an extraordinary occasion and we sincerely hope that some unscrupulous tramps donâ€™t spoil the fun.

PROBABLE STARTING 11 FOR BOTH TEAMS: