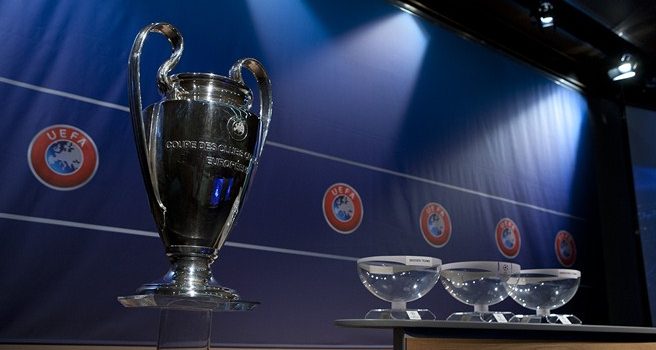 Europe’s most prestigious club competition’s round of sixteen always produces some intriguing games. However the matches this year’s draw has proven to be more even more exciting than ever with a lot of the top teams pitted against each other.

So what are my predictions for these games?

Arguably the world’s two most famous and recognisable clubs will go one on one in a game that would make a more than worthy final. The number of sub stories surrounding this huge match are a plenty, most notably the fact that the second leg will see Manchester United legend Cristiano Ronaldo return to Old Trafford for the first time since his £80 million move to Madrid in the summer of 2009.

Jose Mourinho, who is widely tipped to be Manchester United manager when Alex Ferguson eventually steps down will meet up with his old friend Alex.

Manchester United were eliminated by Madrid in the Champions League in the 2002/03 season losing 6-5 on aggregate, after United won an incredible match 4-3 in the second leg. Ferguson will be desperate to avoid a repeat.

Both sides had an impressive group stage, both qualifying with ease, so it shall be interesting to see how PSG can cope against a team of Valencia’s standard. The likes of Zlatan Ibrahimovic, Thiago Silva and Javier Pastore are more than used to such occasions, but so are many of Valencia’s players, which include Roberto Soldado and captain David Albelda.

Excellent, high octane attacking play from both sides have led to many calling them two “dark horses” in winning the Champions League. However, only one of these top quality teams will make the quarter finals, in what should be two dramatic matches.

What makes the match even more exciting is the fact that both clubs are known for having stunning atmospheres in their respective home grounds.

Arsenal’s failure to win their group has led to them being given an expectedly tough tie against last year’s beaten finalists Bayern Munich. Bayern have looked like a team on a mission so far this season, and they are currently cruising ahead of their rivals in the Bundesliga.

Arsenal haven’t been so impressive, looking shaky and inconsistent. If the situation is the same come February, Arsenal’s Champions League hopes maybe over for another year.

Both these sides have impressed many with very well organized sides. Malaga conceded a mere three goals in six group stage games, and none in the first four games. They’ll have a tough job if they want to stop Jackson Martinez in what will be a very tactically interesting tie.

Fans around the world were shocked when Celtic beat the mighty Barcelona 2-1 at Celtic park in November. Whether they can produce it against Italian champions Juventus remains to be seen, but they will give it a real good go.

Victor Wanyama coped just fine with Xavi and Iniesta, can he do it again with Pirlo, Vidal and Nocerino?

These two masters of European club football have had vastly different seasons so far, Milan not as near the top as normal, while Barcelona have had their best start to a La Liga season ever.

Milan were knocked out by Barcelona last year and Allegri is determined to not let Messi and co. do it for the second year running.

AC Milan vs Barca: The Catalans ran out as victors in last season’s fixture…… Will it be deja vu for the Rossoneri?

Turkish champions Galatasaray recovered from a poor start to qualify from a very close group, but the vibrant and confident Schalke will present a very tough challenge.
But if the competition’s joint top scorer Burak Yilmaz is on form, Schalke could face some problems.

Prediction: Schalke, if they remain calm and do not get fazed by the atmosphere in the away game.