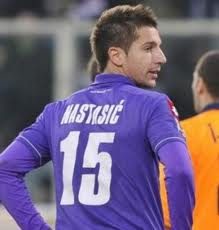 There were moments during January when, as a Manchester City fan, I winced when looking at City’s starting eleven.

Given that Vincent Kompany had recently received a four-match suspension, and that Kolo Toure was absent due to his participation in the African Cup of Nations, Roberto Mancini was left with two options, play Stefan Savic next to Lescott or put Micah Richards in there, and stick Pablo Zabaleta at right-back. He sided with the former, even though Savic had looked shaky in his one previous Premier League start, away to QPR.

In his first game of this horrible period, Savic conceded a penalty against Liverpool after a rash challenge on Daniel Agger, then in his second, he misjudged a header which allowed Jermain Defoe to round Joe Hart and score. He even looked like a nervous wreck two games later in the return leg of a League Cup game against when he had a centre-back either side of him in a five-man defence.

Always a solid game away from being a very good, confident centre-half, but an embarrassing mistake away from being as good as Andy Morrison. It was clear that City needed defensive cover, and that Savic just wasn’t ever going to cut it in England.

So, if Mancini learned anything from this period, it’s that City needed to be rid of Savic, and more defensive cover was needed.

A swap deal that comprises Stefan Savic and £9.5M in exchange for Matija Nastasic of Fiorentina is now being reported in Italy.

Nastasic is only nineteen years-old but has already played twenty-six times in Serie A for La Viola and impressed hugely. He’s a young, hungry centre-half with a knack for pulling off thirty, forty yard passes- the elegant, ball-playing defender that Mancini has longed for.

On the other hand, he has a nasty streak in him, the like of which that have gained Martin Skrtel and Nemanja Vidic so many admirers.

However, what is perhaps most impressive about Nastasic is that, despite his tender age, he has the tactical nous of a seasoned general, I doubt many anticipated his ability to read the game when he first made the step up.

The fact that he already has two caps for the Serbian national team is testament to this. In fact, many ‘experts’ expect Nastasic to overtake one of Ivanovic or Subotic in the team over the next year.

Sure, Nastasic probably won’t be more than third/fourth choice centre back and he will need time to adapt, and I still expect City to dip into the market for a Javi Martinez/Javi Garcia type player that can play both in midfield and defence, but it’s still an excellent piece of business by City nonetheless.

One for the future without any doubt, and if City are lucky, he’s one for the present.

As for Savic, I genuinely expect him to succeed in Serie A, if he can have more of those ‘solid games’. Some of his main qualities are on the ball, carrying the ball out from the back and passing it, and in Italy he will be allowed the time and space to do this that he so critically isn’t afforded by forwards in England.

As is the same with many other players, he simply won’t ever adjust to the pace and intensity of the league.

Good luck to him, I’ll try and remember him for having a Premier League winners medal rather than being a recipe for disaster in the English game.