Claudio Bravo: Why the Chilean’s arrival signifies the end for Hart at Man City 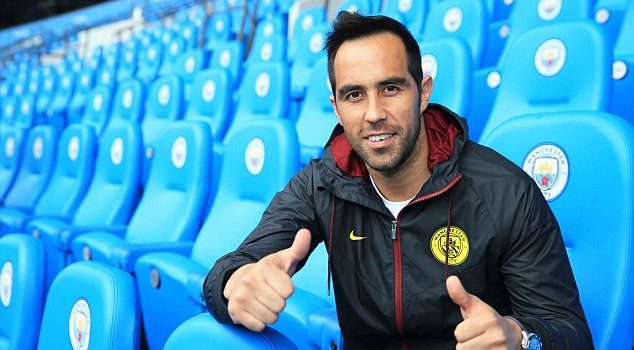 Claudio Bravo: Why the Chilean’s arrival signifies the end for Hart at Man City

Chilean goalkeeper Claudio Bravo has officially signed for Manchester City from Spanish side Barcelona for a reported £15.4 million- with the possibility of an extra £1.7 million in add-ons.

The 33-year old, who lost his place between the sticks to the feather-footed Marc-Andre ter Stegen at the Camp Nou, looks set to replace Joe Hart as Manchester City’s preferred number one.

Much like in the recent seasons gone by, the Citizens are expected to marshal a title challenge, but with the dreaded treble winner with Barcelona as their main architect.

Born Claudio Andres Bravo Munoz on 13 April 2022 in Viluco, Chile, he spent his entire youth and part of his senior career with local side Colo-Colo before moving to Spain in 2006.

His most formative years were spent in the La Liga with Real Sociedad where he made over 200 appearances throughout an 8-year period, before switching to Barcelona in 2014.

He won two La Liga titles and the FIFA Club World Cup during his two-year stay with the Blaugrana before moving to England this summer.

What the move means for Joe Hart

Joe Hart’s future still hangs in the balance with only a matter of days before the close of the 2016 summer transfer window.

England manager Sam Allardyce has already provided Hart with the surety of maintaining his position with the Three Lions regardless of the outcome, but it may become increasingly difficult to hold the stance given the 29-year old’s reported declination of offers from Borussia Dortmund and Sevilla.

Hart seemingly made his first and last appearance this season when he captained his side against Steaua Bucharest in their Champions League play-off win, maintaining a clean sheet in the process.

Whether he will remain on the sidelines on sold before the close of the summer transfer window is left to be seen, but the fact remains that Claudio Bravo’s arrival has signified the end of Joe Hart at Manchester City.