Arsenal: 5 Talking Points From The Gunners’ Victory Over Watford 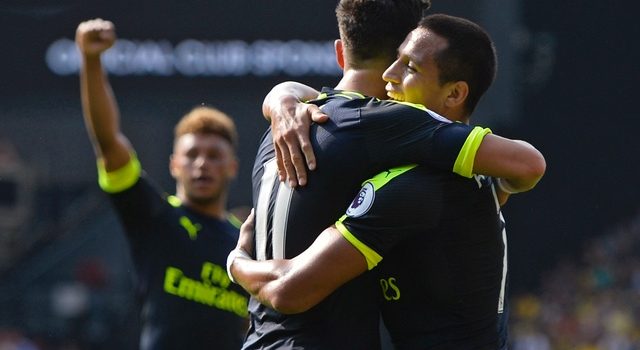 Arsenal: 5 Talking Points From The Gunners’ Victory Over Watford

After collecting just a single point from the first two outings, this victory should serve to get their season going as Arsene Wenger eyes at finishing one spot better than last season.

Here are the five talking points from the London derby.

Is Petr Cech the unsung hero?

Watford hardly tested the Arsenal goalkeeper. However, if it were not for Petr Cech’s reflex, Arsenal could have ended up not claiming their first league win.

Laurent Koscielny’s poor effort at clearing a Nordin Amrabat corner almost rendered the former Chelsea custodian helpless to concede in the first half, but he was alert enough to parry the ball.

His double save to keep out efforts from Odion Ighalo and Jose Holebas shortly after Watford’s first and only goal highlighted the impact a world-class goalkeeper could have.

Although the Arsenal faithful heaped praise on the goal-scorers, the veteran shot-stopper remained the unsung hero.

Why is Granit Xhaka a prized asset?

Although Francis Coquelin came across as the destroyer Arsenal fans had been clamouring for, he never really flourished at linking the defence with the attack.

However, with Granit Xhaka marshaling the midfield, it appeared as though Arsenal had finally brought down the perfect Patrick Vieira replacement.

His pinpoint long balls were a fresh breath of air, and the fact that he had a runner in Alexis Sanchez meant that this combination traumatized the Watford defence; his left-footedness only added to the lethality of the Swiss-Chilean partnership.

Their combination will produce results that are more fruitful when Olivier Giroud returns to action as the Chilean will then become the designated left-winger.

With Theo Walcott, Alex Oxlade-Chamberlain and Sanchez playing up front, the Emirates Stadium side enjoyed a lot of fluidity in attack as whenever Sanchez – playing as a false nine – drifted to the left, the two English wingers repositioned themselves superbly.

Their fluidity was a menace to the Watford as the trio combined to earn a penalty, score a goal, and provide two assists.

The Sanchez-as-a-striker experiment finally had the outcome Wenger had been hunting for, and although that experiment was only seen as a short-term plan, the way in which the front three operated with the aid of the midfield should force the Arsenal manager to consider making the Plan B his Plan A.

Is Mesut Ozil the Gunners’ talisman?

His presence rendered the N5 club more comfortable in the third half as his brilliant movement rendered them more inventive with their buildup.

Accordingly, Ozil managed to stay higher up the pitch, causing a lot of trouble to the opposition defence.

Was the Watford victory a sign of things to come?

Their attempt a quick revival failed as they only managed a goalless draw at Leicester City a week later.

Although they desperately wanted a win at Watford, a win over a side who remain one of the six teams without a win in the division, on paper, may hardly seem a sign of things to come.

However, the Gunners’ collective performance, the new positivity surrounding the club, and the arrival of two valuable additions could hand Arsenal the head start they need.