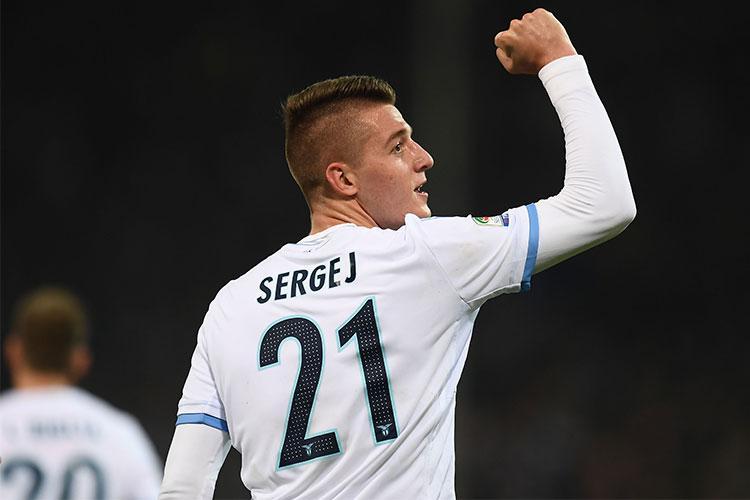 While Liverpool have added two new players to their squad so far this summer, there is a growing sense of concern at the clubs inability to land a genuine big name.

Securing the services of former Chelsea wide-man Mohamed Salah (for £39.1 million) and England U-21 star Dominic Solanke on a free transfer has done little to assuage nervous fans, while manager Jurgen Klopp is keen to add at least three more signings before the end of the summer window.

One of the names linked is the Lazio midfielder Sergej Milinkovic-Savic, with the Reds having reportedly lodged an official bid of £24.7 million.

The questions that remain are whether this deal will go through, and who else may be on the Reds’ radar as the summer progresses?

Will the Reds Secure the Signature of Milinkovic-Savic?

The strong and dominant midfielder, known commonly as Sergej, enjoyed a stellar season for Lazio last year and the Serbian even managed to plunder seven goals (and a further seven assists) in 34 appearances.

The 22-year old has subsequently begun one of the most sought-after young midfielders in Europe, while he is the latest powerhouse to emerge from the Eastern European nation.

The Reds have met with considerable resistance from Lazio, however, who have allegedly refused the initial approach from Liverpool and placed a lofty £61.8 million price tag on their star performer.

In fact, boss Simeone Inzaghi is exceptionally keen to build a side around the midfielder, while also holding on to Keita Balde and Stefan de Vrij.

Given this, the terms of the player’s’ contract and the fact that Lazio are aware of English clubs’ wealth, Liverpool will probably have to pay considerably more if they are to secure their target.

Who Else is On Jurgen Klopp’s Radar?

For those who are fans of matched bets, however, Milinkovic-Savic remains the player most likely to sign for Liverpool at the moment.

After all, the pursuit of RB Leipzig’s midfield anchor Naby Keita looks doomed to fail, with the latest blow being dealt by club sporting director Ralf Rangnick’s assertion that none of his players were for sale this summer.

The Reds were already loathe to spend £70 million on the energetic 22-year old, and they now face an uphill battle to complete the signing.

The defence is also a key area of concern for Klopp, who deployed James Milner as a make-shift (if highly effective left back) for much of last season.

Hull City’s attacking full back Andy Robertson has been strongly linked with a move to Anfield after some sparkling displays towards the end of last season, with the Scottish international thought to be available for a fee of around £25 million.

Leicester City’s Demarai Gray, who starred for the the England U-21 side this summer, has also been linked with a move, although the Reds face huge competition from top four rivals Spurs for his signature.

These deals remain speculation for now, however, while the Reds are also bracing themselves for bids from Barcelona and PSG for the brilliant Brazilian Philippe Coutinho.

No wonder Klopp has urged patience among his fans, as the summer threatens to become a frustrating one for everyone associated with Liverpool.