Julian Weigl: Should Man United move for the Dortmund star? 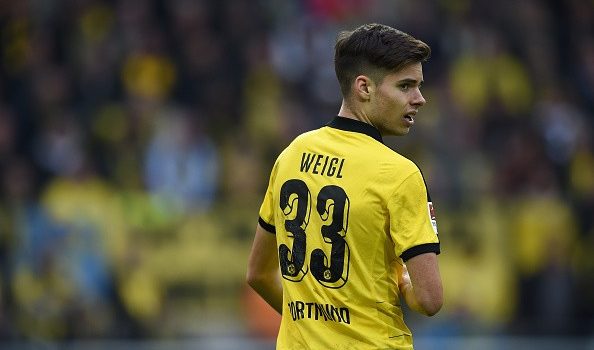 Julian Weigl: Should Man United move for the Dortmund star?

According to the Daily Mail, the Red Devils are considering a move for the German international as deals for Eric Dier and Nemanja Matic failed to materialise.

Jose Mourinho is said to be keen on adding a holding midfielder and Weigl fits such a description, as he formed the base of Dortmund’s attack last season.

The Daily Mail are reporting that the United hierarchy remain quietly confident that a deal can actually be reached with Chelsea over the signature of Matic, so it seems such interest in Weigl is secondary to the Serbian.

Weigl also broke his ankle in May of last season and is out of action until September, potentially hampering a move to Old Trafford.

Yet, it would not be unlikely that if a deal for Matic could not be reached then Weigl would become a priority – his composed shielding of the back four and confident ability to move the ball forward would see him as an adequate replacement for Matic.