The Cassano-Pazzini Swap: Good deal for both Milan sides? 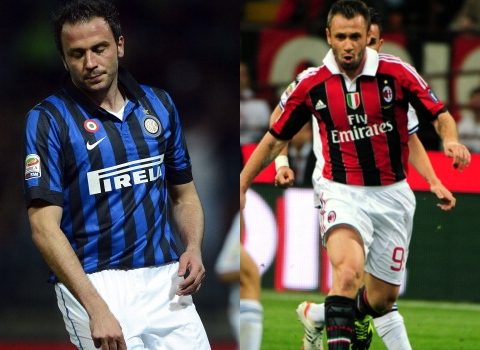 The Cassano-Pazzini Swap: Good deal for both Milan sides?

Yet another great player is leaving Milan this summer and this time its Antonio Cassano, “the jewel of Old Bari” as his fans like to call him is leaving to Ac Milan’s biggest rivals Inter Milan in a swap deal with Giampaolo Pazzini.

After the departure of few legends followed by the famous 62 million deal that sent Silva and Ibrahimovic to PSG, Cassano was quite upset and it was certain by the way he was acting in the pre-season that he doesn’t want to stay in Milan anymore. Cassano was known for his short temper with Roma, Real Madrid and Sampdoria whom he joined on a one year loan from Real Madrid before moving to i Blucerchiati on a permanent move the following year. After forming an entertaining duo with Pazzini, the other player involved in the deal, Cassano got into a heated argument with Sampdoria’s chairman Riccardo Garrone after refusing to attend an award ceremony that led to him being excluded of the team.

In the winter transfers of 2010-2011, Ac Milan managed to sign Cassano and re-launched his career as he was called back to the Azzurri team by Cesare Prandelli after a two-year absence. A perfect pre-season followed by a goal in the opening match against Lazio only meant one thing, Cassano is back! Ten assists in 16 matches had him leading the assists table in Europe before he collapsed in the plane back to Milan after defeating Roma 3-2 in the Stadio Olimpico, the club announced that Cassano suffered ischemic-based cerebral damage and underwent a heart surgery. Even tho he returned to action 6 weeks before the Euro, head coach Cesare Prandelli still picked him to lead the team upfront alongside Super Mario Balotelli.

As a Milan fan I will miss Cassano and his magical touches on the pitch but you can’t keep a demotivated player that asked for a transfer against his will. The thing that hurts the most is that he will join Inter who celebrated his heart attack at the last derby with a personalized banner.

On the other hand “ll Pazzo” Pazzini is a great finisher especially in the air and Milan do need that more than ever after Ibrahimvoic left to PSG but with Cassano leaving who will provide Pazzini the chances? Some would say he has been on the bench for quite some time with Inter and he won’t be of any use in Milan but so was Forlan… Just like Cassano, Pazzini would love to re-launch his career after missing on the Euro and become a sub in Inter.

Congratulations to all the Inter fans for pulling off such a deal.
And for all the worried Milan fans out there, here is a little something to cheer you up. Pazzini’s scoring record in his last 2 seasons before joining Inter; 19 goals in 2009/10, 17 goals in 2010/11 with Sampdoria.