World Cup: FIFA blinded by money as they struggle to realise the problems caused by Qatar 2022 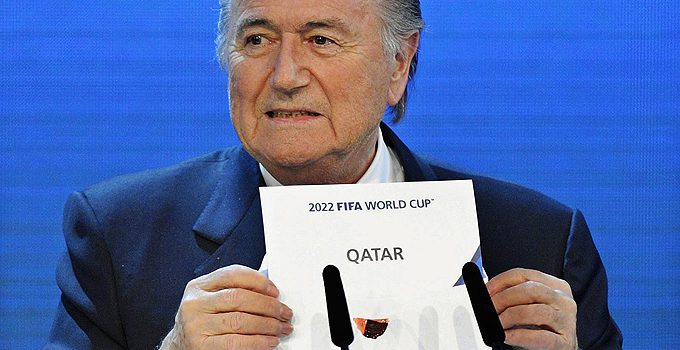 World Cup: FIFA blinded by money as they struggle to realise the problems caused by Qatar 2022

This last week has seen the latest round of qualifiers for the 2014 World Cup in Brazil next summer, but it is the one looming nine years in the future that has grasped the main talking points. Not only has new FA chairman Greg Dyke set England the target of winning it, an extraordinary target given the destitution of their 0-0 draw in Kiev on Tuesday, but FIFA have suddenly realised what a shambles it promises to be.

After Qatar were awarded the 2022 competition, it may have been a cynical reaction to say FIFA officials were blinded by the piles of gold that simmers in the desert of sheikhs and oil magnates in the Far East. Yet it seems that the governing body of the football world may have indeed been confused that much by the sight of bank notes and the smell of giant wads of cash that simple common sense was bypassed in the decision-making process.

“It may well be that we made a mistake at the time” said FIFA president Sepp Blatter, almost as if he had waited a couple of years after the initial 2010 award to read the brochure of Qatar’s actual bid. As he glanced into the “climate” section, he would have discovered why it was graded as a “high operational risk” by FIFA a month before they made the decision.

In a tournament traditionally hosted in the summer, teams will be playing in temperatures rising up to 50 degrees, though it seems to be the case that FIFA, not averse to financial scandal or accusations of bribery and deceit, see playing football there as secondary to making money there.

Blatter’s answer, typical of his presidential lunacy, is to move the tournament to the winter, an idea that will rip through most country’s domestic calendars like an almighty hurricane.

Blatter’s defence of that idea was even more laughable, attempting to appear as some kind of altruistic anti-colonialist sticking up for the under-privileged folk in the east who don’t get to witness such football first hand. “I think it is high time that Europe starts to understand that we do not rule the world anymore, and that some former European imperial powers can no longer impress their will on to others in faraway places” he said.

In saying that, Blatter does have a point. After all, football is a global sport and the success of the tournament held in post-apartheid South Africa enlightened many people culturally, though any validity in his opinion is undermined by hosting the competition in surroundings that are practically impossible.

Plus, Blatter also fails to notice that the same kind of imperialism he attempts to so admirably speak out against, currently exists in countries like Qatar, an autocratic rule that views homosexuality as illegal and has many outspoken critics of its human rights record.

A recent Amnesty International report found that women face discrimination and violence while the same report, covering January to December 2009, read that 18 people were sentenced to lashings for offences related to sexual activity or alcohol consumption.

A totalitarian state which harbours anti-homosexual views is of course a fine place to host a worldwide event which warrants compromising FIFA’s campaign for fairness and equal rights. Why keep your morals intact when you can put a price on them?

It is clear that Qatar are paying through the nose for this World Cup and FIFA are lapping it up, seemingly in the clear after Phaedra Almajid retracted her allegations of bribery that saw four senior members of the authority investigated.

With a bottomless supply of oil reserves that currently sees them operate a GDP of €187.1 billion and a natural gas supply that puts Qatar as the 3rd biggest exporter in the world, Qatar has money to burn, as well as to plough into western real-estates, shopping malls and football clubs.

Not content with bankrolling Manchester City, PSG et al. Qataris want football to come to them and Blatter, in his new role as ambassador for internationalism, is happy enough to give it to them, just as long as he adds a few extra noughts to his already-sizeable Swiss bank account.

It will also come at the sacrifice of domestic European football, trampling all over the schedule so they are forced to play in the summer for three years or so, but seemingly that doesn’t matter with vast sums of money involved.

“Who are we, the Europeans, to demand that this event has to cater to the needs of 800 million Europeans above all?” asks the bumbling Swiss, whose FIFA reign has lurched embarrassingly from one controversy to another.

Though awarding the World Cup to a country in which it would be unfeasible, as well as unearthing a chest full of social and human rights issues, is perhaps the biggest embarrassment of them all.

Dyke may have set the cross-hairs on his bright new plan for English football on the 2022 World Cup, but he may be better positioned to think again. It would be more reasonable to avoid entering it altogether.