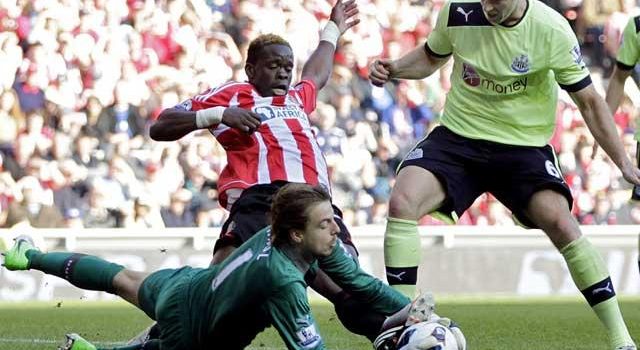 Sunderland vs Newcastle: a game where Geordies and Mackems clash to support their beloved teams in a fiery encounter.

The game started off much that way too, Newcastle beginning the game at a fast pace in search of an early goal. And that’s what they got! A sloppy Danny Rose pass was picked up by Gutierrez who drove at the Sunderland defence, rolled through a ball towards Ba, who’s shot was pushed out by Mignolet into the path of Cabaye who applied a tidy finish.

This goal set the scene for the game, as fast paced enthralling football was by both sides. Just over 10 minutes later, controversy struck as Tiote was sent off for a studs-showing kick into Fletcher’s leg. The tackle had Twitter debating on whether the challenge was red-card-worthy. Atmosphere stepped up a level from Sunderland fans who tried to rally their team.

However it seemed Sunderland didn’t realise they had a man advantage who weren’t pushing forward in numbers. Sunderland did produce a few opportunities; a curling effort by Johnson sailed over the bar and Gardner’s chipped shot forcing a corner from Krul.

Newcastle came close too - a clever corner set-up shot by Cabaye, flicked up to Demba Ba who chested the ball and attempted a spectacular overhead kick, unfortunately for him, the shot fizzed over Mignolet’s goal.

Moving on to the second half, Sunderland came out and really pressed for an equaliser. James McClean and Seb Larsson coming into the game more as Sunderland tried many efforts at Krul’s goal. The main factor of Sunderland playing better was moving Gardner from right back into the midfield. The former Birmingham City player caused problems throughout the match.

The Black Cats also attempted to bolster there attack by bringing on Louis Saha and David Vaughan whilst The Magpies brought on Ryan Taylor to help his team out at the back. With 5 minutes remaining, Sunderland equalised, an excellently weighted free kick by Larsson took a nick off O’Shea and on to the head of the unaware Demba Ba and looped into the net. The stadium erupted with joy with the team celebrating.

A late attempt at a winner proved to be in vain as the game ended.

Sunderland lined up in a 4-4-1-1 formation with Sessegnon playing just behind Fletcher. Martin O’Neill’s aim was to utilise the wings with McClean and Johnson and feed many crosses to Fletcher with Sessegnon picking up the scraps.

Not really, both Santon and Simpson had excellent games and McClean and especially Johnson failed to find much space to whip the crosses in. This limited the amount of time Fletcher and Sessegnon had the ball.

Moving Craig Gardner into midfield, he relished the amount of space he had due to Tiote’s sending off.

Newcastle lined up in a 4-4-2 formation. Pardew wanted Cabaye to push forward and assist Ba, Ameobi and Ben Arfa, and Tiote to sit back and defend. However due to Tiote’s red card it meant Perch had to come on and Newcastle had to play one up front.

At times, yes. Cabaye picked out Ba a lot, and could have scored more.

Ben Arfa’s play. He had a bad game, and made it harder to attack for Newcastle.

Sunderland: I’d take out Adam Johnson, move Larsson on to the right flank, Gardner into centre midfield and bring on Bardsley at right back. Also, I’d start Saha over Sessegnon.

Newcastle: I’d remove Ben Arfa and bring in Cisse and remove Ameobi and bring in Anita. I’d change the formation to a 4-3-3 - Tiote, Cabaye and Anita in the midfield and Ba, Cisse, Gutierrez as the attacking trio.