Mateo Kovacic: Will the Croatian starlet make the grade at Real Madrid? 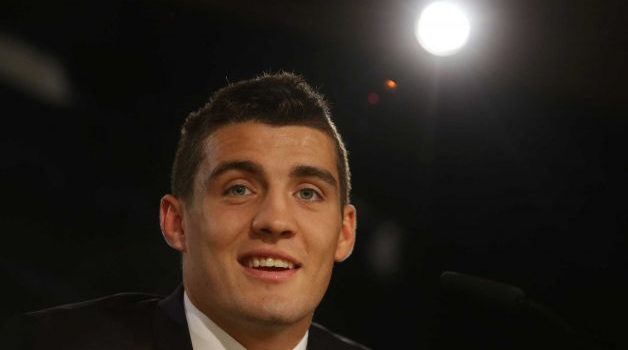 Mateo Kovacic: Will the Croatian starlet make the grade at Real Madrid?

Mateo Kovacic did not get his Real Madrid career off to the best start when he chose the Catalan language to greet onlookers during his unveiling.

It is not sure whether he was set up by a new teammate or made a genuine mistake, but it certainly added an awkward atmosphere to the presentation ceremony.

After speaking in the local tongue of bitter rivals Barcelona, the Croatian will now be keen to make amends on the pitch.

Let the football do the talking

Like many modern footballers, Kovacic may not be cut out for public speaking and might be well-advised to avoid microphones for the foreseeable future; however, when it comes to playing football, he is as eloquent and expressive as they come.

Despite being spotted by top European scouts as a 13-year-old at the LASK Linz academy, the trajectory of Kovacic’s career has exceeded the expectations of even his most ardent admirers.

Having impressed at youth level the Austrian-born player was snapped up by Dinamo Zagreb and made his professional debut in 2010, becoming the youngest ever goalscorer in Croatian top-flight history at just 16 years of age.

During the next three seasons he won the league and cup double twice and gained valuable European experience in the group stages of the Champions League, prompting a €11m bid from Italian club Internazionale.

It was during his spell in Italy that he really made a name for himself as a dynamic and versatile midfielder. While rumours of moves to both Barcelona and Liverpool were circulated, it was the ten-time European champions who took the plunge and offered a six-year deal believed to be worth in excess of €30m.

It is no wonder that Rafa Benitez was happy to welcome the Croatian international to the Bernabeu. The 21-year-old has the ability to play on either side of midfield in advanced or withdrawn positions. Having this kind of versatility and discipline at his disposal will be a luxury for the new coach as he looks to build a team that can dominate on all fronts this season.

Having said that, a place in the first XI will not be guaranteed, and Kovacic may have to compete with compatriot Luka Modric for a berth in his preferred central attacking-midfield position. His arrival could also mean that both Lucas Silva and Asier Illaramendi could be pushed even further down the Madrid pecking order, or be forced to move on.

Having exceptional talent and a big reputation does not count for much at Real Madrid if you cannot handle the pressure of playing for the world’s richest club.

For a young player like Kovacic, the dream move can soon turn into a nightmare if things do not go well on the pitch. Keeping the crowd on your side is not always easy, as club legends such as Iker Casillas and Cristiano Ronaldo can attest to.

In what could be a season of integration, it will be interesting to see how Benitez utilises the midfielder and how the player himself copes with the weight of expectation on his shoulders. If both aspects are handled correctly, Kovacic could go on to be a huge name in the Spanish capital.