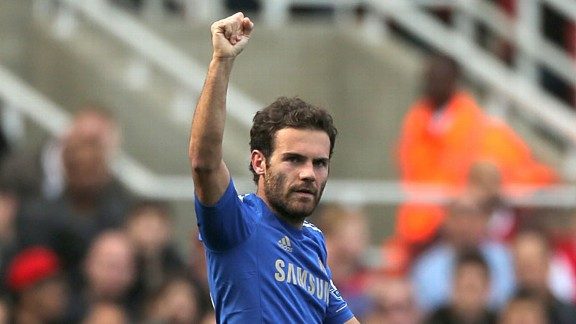 Due to the signings of Eden Hazard, Victor Moses and Oscar during the transfer window, many questioned Juan Mata’s role at Chelsea. However in recent games, Mata has been showing exactly why he deserves to be one of the first names on the Chelsea team sheet each week.

Mata, who joined Chelsea from Valencia in the 2011 transfer window had a superb first season for Chelsea and was an integral part of the side who became London’s first European champions. He was predominantly played down the left flank in a front three consisting of himself, Daniel Sturridge and either Fernando Torres or Didier Drogba in the middle.

Being in this position proved to be a great thing for Mata as his creativity and consistency earned him the award of Fans’ Player of the Season.

However seeing as strikers Salomon Kalou, Didier Drogba and Romelu Lukaku (on loan) all left Chelsea this summer, Mata knew he would probably have to adapt to a new formation. Also, with the arrivals of attacking midfielder Oscar and wingers Eden Hazard and Victor Moses, the summer was filled with many fans and analysts scratching their heads as to where the 24 year old Mata would actually play.

In Chelsea’s first game of the season away at Wigan, Mata played on the left in a front three with Hazard on the right and Torres in the middle. However, this was before Moses joined and Oscar was yet to have any game time.

Against Juventus in the champions league however, Chelsea manager Roberto Di Matteo decided to change things up, in the meantime giving Brazilian Oscar his first start in a blues shirt. He played a 4-2-3-1 formation with Oscar, Hazard and Mata in the three playing just behind Fernando Torres. The match ended 2-2 but Oscar scored both Chelsea’s goals and Hazard and Mata had solid performances.

The weekend after the Juventus game, and Di Matteo went with the same formation to face Stoke in the Premier League. Although the trio did occasionally find themselves having the same ideas, they all looked menacing and each saw plenty of the ball. Mata in particular did well as he got his first assist of the season to set up Ashley Cole’s winner.

Then this Saturday, with all three of Chelsea’s attacking midfielders and wingers in the starting line-up, Mata put in nothing short of a footballing master class against Arsenal.

One of Mata’s few criticisms since his time in England began has been his tendency to fade in and out of the game. There was no such issue for Mata on Saturday as he tormented the Gunners defence. His contribution to Chelsea’s 2-1 win was an excellent free kick which eventually led to Laurent Koscielny turning the ball into his own net for what became the winning goal.

With Chelsea’s 4-2-3-1 formation working better game by game, I believe they have the potential to be one of the most fearsome attacks in the Premier League and even Europe. Also, with Fernando Torres having scored an impressive 5 goals in nine games so far this season, Chelsea fans could very well see goals galore this season.

As a lot of these three’s time will be played in the middle of the park, full backs Ashley Cole, Branislav Ivanovic, Cesar Azpilicueta and Ryan Bertrand will have plenty of space to get forward themselves.

The general form and continuous improvement of Mata, Hazard and Oscar as a trio bodes well for the season ahead.