Chelsea: Salomon Kalou – The Past, Present and Future

Chelsea: Salomon Kalou – The Past, Present and Future

Salomon Kalou completed a move to Lille following the expiry of his Chelsea deal. Let’s take a look back at his career.


A few days following Chelsea winning the Premier League, Jose Mourinho successfully bolstered his squad with the acquisition of Salomon Kalou, the fee was undisclosed, but believed to be around £9m from Dutch club Feyenoord.


Jose Mourinho was full of praise for the young man. During his first day at the club, Kalou took a camera because he was so amazed to play with the likes of Terry and Drogba.


Kalou scored his first Chelsea goal, in a league cup match against Blackburn. Kalou became an impact sub, after scoring the 1-0 winner against Watford in the 93rd minute.


Chelsea reached both the FA Cup and League Cup final, in which Kalou featured in from the bench. Kalou finished the season on 9 goals.


Kalou began the 07/08 season in style scoring in games against Man City in a 6-0 win and against Derby in a 2-0 win. Kalou broke the record for the most offsides in a Premier League season, alerting critics who questioned his ability to read the game.


Kalou played in a league cup quarter final in a 4-3-2-1 formation, and ultimately played in that system until the end of the season. Thereafter, Kalou began scoring and creating more chances, contributing in Chelsea’s success.


Kalou helped Chelsea reach the final of the Champions League by floating in a cross which Riise nodded into his own net.


Kalou scored his penalty in the penalty shootout of the Champions League final, despite Chelsea falling short. Kalou finished with 11 goals.

While Luiz Felipe Scolari was manager at Chelsea, Kalou failed to make an impact following his participation in the 2008 Beijing Olympics, alhough Kalou came on against Manchester United and rescued a point for the Blues.


Kalou scored his first double for Chelsea and assisted a Frank Lampard header in a 5-0 thrashing of Middlesbrough.

Once Hiddink was appointed to replace hopeless Scolari, Kalou found his name on the team-sheet more often, and began scoring again. He finished with 10 goals.


Kalou began this season excellently, beating Manchester United in the Community Shield with him scoring on his birthday. A few weeks later, Kalou also netted against QPR in the League Cup.


On 12th October 2009, Kalou was rewarded with a new three-year deal. To celebrate his new contract, Kalou scored a brace against Atletico Madrid in the Champions League. Kalou followed up by scoring against Bolton and Blackburn, before enduring a two month duck.


Kalou broke his duck by netting against Kalou in an FA Cup tie versus Cardiff City.


Kalou also played in Chelsea’s 8-0 ripping against Wigan, in which he scored the third goal, and picked up his first Premier League winners medal.


Kalou, as he had done in many other seasons, began the season with a goal against Manchester United in the Community Shield in which Chelsea lost 3-1.


Following Chelsea acquiring the services of Fernando Torres, Kalou struggled for game time, but sealed 10 Premier League goals- a record for him.


With the appointment of Andre Villas Boas, and his policy to promote the youth, Kalou found himself glued to the bench, just making 4 starts in 7 months. His 5 goals came against Leicester, Benfica, Fulham, West Brom and Newcastle.


He was noted at the end of the season that he wouldn’t be getting a contract extension, and began the search for a new club. The likes of Schalke, Liverpol, Galatasaray, Newcastle and Arsenal were interested, but it was Lille who won the race for his signature.


How Kalou will fit into Lille’s system 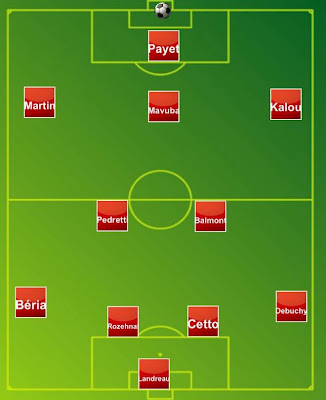 As you can see, I have deployed Kalou on the right flank and Marvin Martin on the left flank.


Lille will be encouraged to use width in order to score goals.


With more signings coming, Lille could be successful, with the help of Kalou. They need another striker, too, following Moussa Sow’s exit.