Theo Walcott: Will the Arsenal Speedster Ever Fulfill His Potential? 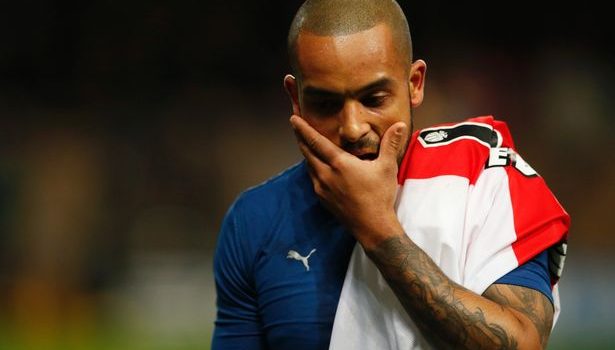 Theo Walcott: Will the Arsenal Speedster Ever Fulfill His Potential?

Arsenal desperately need a goal against Southampton to remain in contention to win their first Premier League title in more than a decade. With one-third of the game left to play, Arsene Wenger sacrifices Joel Campbell for Theo Walcott as the Gunners continued to pepper the Southampton goal.

Six minutes into his appearance, the former Southampton starlet gets his first clear-cut chance but decides to shoot straight at Fraser Forster before staging his trademark gesture of disbelief. Footballers can be forgiven for spurning such easy chances, but making the fans think that shot would lead to nothing is unforgivable.

Will he ever be able to be half as prolific a striker that he was touted to become?

After five senior goals for Southampton – who were then a Championship side – he earned an England call-up from Sven-Goran Eriksson and an eventual debut – all at the age of 16. Prior to becoming the youngest debutant for the Three Lions, he broke the record for the most expensive 16-year-old as the Gunners shelled out £12.5 million (including add-ons) for him.

Besides, he also drew comparisons to Wayne Rooney and Thierry Henry even before making his Premier League debut in a period, when the Internet was not half as stupid as it is now.

Arsene Wenger: “He is comparable to Wayne Rooney at his age. You have to be cautious with comparisons. Rooney has made big steps forward and justified what people said about him and I feel Theo can do the same.”

Harry Redknapp: “Henry is as fantastic a footballer as you’ll ever see. I hope this kid can go on and be a top player as well, but he is a million miles from Thierry Henry and if he ever gets anywhere near his standard he will be one of the best players we’ve ever seen in this country. He’s got a long way to go to get there but, please God, he becomes a top player which I’m sure he can do.”

The position dilemma, Alex Oxlade-Chamberlain and 27

Though Arsenal fans are often labeled fickle, not a lot of fanbases can better them as far as being optimistic about their players is concerned. Throughout the period the English international operated as a right-winger, they were forcing themselves into believing that his true potential would become known if he played as a centre forward.

However, except for rare moments of brilliance, he continues to frustrate his patrons. He turns 27 next month, and we are yet to see him become a finished product.

At an age he should be guiding Alex Oxlade-Chamberlain and Alex Iwobi, he is still fighting to discover his potential, having managed double figures in the Premier League just once in his decade-long Arsenal career.

Failing at his only strength – nail in the coffin

Despite his continued failures, the Stanmore-born lad has earned a reputation for making superb runs in behind and being deadly in one-on-one situations, but lately, such sights have become a rarity, with his one-on-one miss against Burnley in the fourth- round Football Association Cup bearing testimony to the fact that he could never be Arsenal quality.

Arsenal must take advantage of Liverpool’s penchant for signing average English players for over £20million to save £110,000 every week.

They could then help improving, if not, potential world-class talents such as Alex Iwobi, Jeff Reine-Adelaide or even Alex Oxlade-Chamberlain gain some minutes that Theo Walcott steals from them currently.