Jon Toral: Will the young Spaniard be decisive for Arsenal next season? 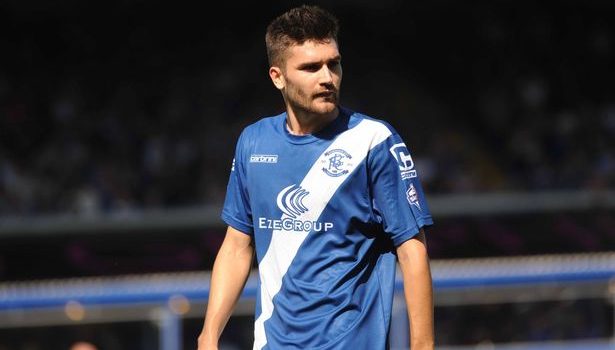 Jon Toral: Will the young Spaniard be decisive for Arsenal next season?

Arsenal headed into the Emirates FA Cup fifth-round replay with Hull City on Wednesday night taking inspiration from their academy product and Birmingham City loanee in Jon-Miquel Toral, who turned his marker to fire past Hull City goalkeeper in Allan McGregor from 20 yards out in a recent fixture.

However, whether he will feature in Arsene Wenger’s plans next season remains as uncertain as Arsenal piping Tottenham Hotspur and Leicester City to the title this season.

When the Gunners plucked him from Barcelona’s La Masia academy alongside Hector Bellerin in the summer of 2011, many touted him to make the breakthrough before Arsenal’s first choice right-back, but a recurring knee problem hampered his progress for the best part of his Arsenal career; however, at the back of two impressive Championship loan spells, he will expect to emulate the progress of his close pal.

How he has fared at Birmingham

After losing his place in the starting lineup due to defensive frailties, the Spaniard bounced back, showcasing manager Gary Rowett his expertise in the opposition half, which would be pivotal in Birmingham’s Premier League ambitions. His quick-fire return to the starting eleven only highlights his desire and outstanding work ethic, which his youth coach Andres Carrasco feels are his biggest strengths.

“I know it’s a very flippant and easy thing to say, that he should be in double figures at the moment with his goals because he has had lots and lots of opportunities,” said the Birmingham manager after the midfielder regained his place in the matchday lineup. “It’s hard to see Jon as a 20-year-old, you look at him and almost think he’s a little bit older than that and a little bit more mature the way he plays and the calmness and composure he shows.”

The 20-year-old has bagged seven goals in 22 league starts, of which three came from outside the box, and the fact that he has averaged one goal every 1.8 shots portrays the no-nonsense shooter in him. Besides, he has three headed goals to his name, which proves the aerial threat he can impose. However, his passing looks a major concern, given his unimpressive pass completion of 73.5 per cent.

Another worry is his limited defensive contribution; his Squawka defensive score is slightly less than that of his Arsenal counterpart in Mesut Ozil, but it should be noted that he operates more as a false 9 for Birmingham rather than an archetypal number 10.

What Arsenal fans should be wary of

Through the years, Arsenal supporters have created a tendency to disparage players their manager already has it his disposal and holding loanees and transfer targets in high esteem. The incredible fact that he played a meagre 61 minutes of the possible 630 over two months due to mediocre performances halfway into the season should lower their expectations.

He can yet turn out to be the next Thomas Eisfeld or Ryo Miyaichi as he ranks 14th amongst Birmingham players this season, according to statistic-based WhoScored ratings.

Will he make the cut at Arsenal?

“I’m so grateful to Arsenal,” said Jon Toral. “They helped me a lot through a time when I had a few injuries. They helped me and they always showed confidence in me, so I’m grateful for that and I just want to keep learning to see if I can go back there.”

The former Barcelona youth product expressed his gratitude to Arsenal for keeping faith in him through his injury-laden years in an interview with Sky Sports in December but sounded unsure of his future with the Emirates Stadium club. He has every reason to be sceptical, as only a very few Championship loanees have made it big at Arsenal through the years, with the story of Henri Lansbury bearing testimony to the trend.

Besides, success in the English second tier does not essentially translate into success in the Premier League, given the peculiar case of Patrick Bamford, who set the Championship abuzz last season only to struggle for minutes at Crystal Palace and Norwich City this season.

However, with Arsenal likely to offload truckloads of midfielders – Mathieu Flamini, Mikel Arteta and Tomas Rosicky – in the summer and given the injury record of Jack Wilshere and Aaron Ramsey, the Arsenal manager will find it difficult to resist offering him a contract extension – his current contract runs out this summer – as he can add depth to the squad, which will go through a semi-overhaul before the start of the next season.

As things stand, he should make massive improvements to don the famous red and white shirt in the long-term. However, he has repeatedly defied odds to be the player that he is today, and it would not be a surprise if he did a Francis Coquelin (minus the tackle on Harry Kane).