Granit Xhaka: How Arsenal will lineup with the Swiss star in midfield 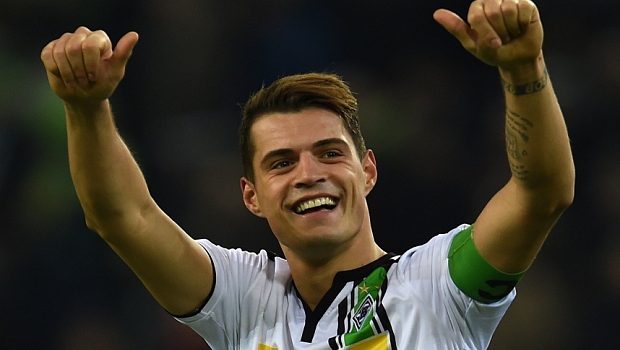 Granit Xhaka: How Arsenal will lineup with the Swiss star in midfield

“At the moment, no. We are starting to look at people who can strengthen our squad. But we are not on any particular case in a concrete way,” said an animated Arsene Wenger when the press quizzed him about the potential arrival of Granit Xhaka.

Given the gaffer’s inclination to rubbishing speculations before making the transfer official, Arsenal supporters have earned the right to be excited about his arrival.

With Tomas Rosicky, Mathieu Flamini, and Mikel Arteta bidding adieu to Emirates Stadium come the summer, the Gunners are in desperate need of midfield reinforcements. In addition, Arsenal would be without Mohamed Elneny for two months halfway into the campaign, provided Egypt qualified for 2017 African Cup of Nations.

Although Arsenal faithful will fancy seeing a Pierre-Emerick Aubameyang or a Romelu Lukaku in the red and white shirt, midfield is an issue to be addressed, and Xhaka rumours can accordingly be identified as believable.

The Swiss international has been branded as a hybrid of a deep lying playmaker and a defensive midfielder, drawing comparisons to legends such as Bastian Schweinsteiger and Xabi Alonso. However, his contribution does not emanate only from the deep as he also regularly plays as the number 10 for his national side.

Despite possessing an admirable passing range, he sticks a foot out whenever necessary. Positionally aware, he maintains the defensive shape of his side, and his presence is best felt during the transitional phase as he initiates most of Borussia Monchengladbach’s attacks.

Furthermore, standing at 6 feet 1 inch tall, he has won 56.25 percent of his aerial duels.

Arsenal have been slated for assigning two players the job bigger teams usually deploy one player for. On paper, the former Basel midfielder effectively carries out the duties of both Francis Coquelin and Mohamed Elneny single-handedly.

However, Monchengladbach’s 4-4-2 system essentially deploys two holding midfielders to share the dirty works, with Mahmoud Dahoud completing the double pivot. Both men average more than two interceptions whilst Arsenal’s double pivot is characterized by one aligning with the attack and the other being the third centreback.

Given his playing style, he is best deployed alongside Jack Wilshere as both enhance both the defensive and the attacking aspects of the game drastically. With the England international, he could be as effective for Arsenal as he is for Monchengladbach; however, he will likely flounder whilst partnering Santi Cazorla given the defensive frailties of the Spaniard.

With the Arsenal manager ready to tweak his tactics based on the opposition, he could be a fantastic addition as he favours espousal of an array of systems.

Accordingly, he could be an important cog whilst locking horns with teams such as Chelsea or Champions League knockout stage clubs as throwing him alongside Francis Coquelin or Mohamed Elneny could not only shut out any midfield but also help the London club not compromise on the attack wholly.

Potential barrier and the desperate need

If he does sign for the Ashburton Grove club, first team involvement of Arsenal’s consistent performers in Francis Coquelin and Mohamed Elneny will shrink though it can be argued that their positions being under some serious threat will help them perform better.

However, Arsenal’s midfield, no matter how crowded it is at the start of the season, becomes depleted due to injuries at some point, and fans will expect that issue to be addressed when the transfer window opens.