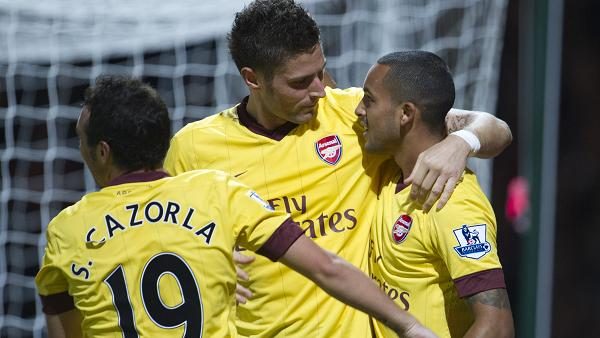 Now, Theo, are you going to sign da ting or what?

Theo Walcott has been in the limelight of the media a lot recently, mainly due to his contract situation. The flying Englishman has just 9 months left on his contract and Arsenal fans are starting to worry about whether or not he will put pen to paper.

Wenger was recently asked by Sky Sports if he thought Walcott would sign, to which he replied, “I think so. But I cannot tell you what he tells me. We are always in touch. He has character. He keeps focused and he wants to show he is 100 per cent professional and I have a big respect for that attitude.

Theo’s game is based on movement off the ball, timing and finishing. He can play wide, he can play centre. Basically it is not so important. He has improved a lot in his finishing. Even if he plays wide or centre he gets in positions where he can score.”

It is not unknown that Theo wishes to play as a centre-forward, and has done since his arrival at the Emirates from Southampton back in 2006. When he was first signed, many tipped him as the new Thierry Henry. Pace and finishing ability were his main traits, also possessed by the King amongst many others, and Walcott started showing glimpses of a player that was worth the large fee that he brought with him.

Recently, Walcott spoke to the BBC about the comments made by the press, “I’ve been judged, with people saying it’s all about money. It’s never been that with me. Playing up front is important. It’s one of the main factors for me. I signed as a striker. I’ve learnt my trade out on the wing.

There is no denying that on his day, Theo Walcott is devastating. He can tear defences apart with his blistering pace, pick out the corner of the goal with a beautifully slotted shot or find the head of a teammate after reaching the by-line. The only problem he has is not turning up every week.

Walcott is a direct player; he likes to run at defenders. He has troubled some of the best full-backs in the world using his terrifying pace and close control dribbling ability. Fair enough these abilities are best used on the wing, where there is more space, but Theo also has the ability to slot the ball home. He finds himself in great positions and this is no accident, some criticize him for not having a ‘footballing brain’, but I beg to differ.

I have said in the past that Walcott would be best suited in a 4-4-2 system, possibly playing off a stronger, taller Olivier Giroud. That could be some partnership. But all the while Wenger is in charge; we are more than likely to see his original 4-3-3 formation (more like 2-4-1-3).

But does Walcott have the ability and tools to succeed there? We have seen it done by Gervinho, and in my opinion Theo is a much better player, so why not give the 23 year old his chance?

The only way I can see Theo signing is if he is given this chance, which I am optimistic he will. If it is successful then we could have a great striker on our hands, if not then he will surely be shown the exit door. It’s best for everyone involved – Theo, the Club, the fans - if this matter is resolved sooner rather than later.

I for one, am hoping he stays, but only time will tell.