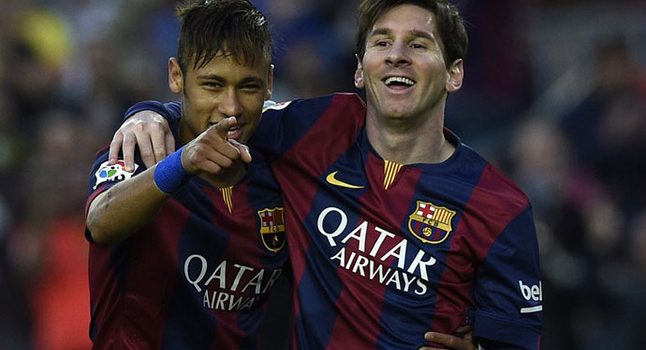 Spain would again produce the champions of Europe, Barcelona taking the Champions League off Real Madrid as the Catalans won their 4th European Cup in 9 years to complete an historic treble in Luis Enrique’s first season in charge.

The first part of that trophy haul was the La Liga title, their 23rd crown which puts them 9 behind Real Madrid. Real pushed the Catalans all the way but ultimately missed out by just two points, finishing the campaign trophy-less and bidding farewell to Carlo Ancelotti.

It was far from all about the El Clasico two however, as Valencia returned to a genuine force under Nuno Espirito Santo and finished 4th, Sevilla won the Europa League and Atletico Madrid, despite losing major components of their title-winning team the previous summer, claimed third place.

That meant La Liga would boast 5 teams in the Champions League next year with arguments over who hosts Europe’s strongest league now swaying strongly towards Spain.

There were plenty of other stories; most notably that of Eibar, by some distance the smallest team in the league, surviving after Elche were relegated because of unpaid tax debts. Deportivo escaped the relegation trapdoor with a miraculous final-day comeback against Barcelona and Granada also survived, sending Almeria down on a rollercoaster last day.

So it was as entertaining as ever in Spain and now with it all said and done, it’s time for everybody to objectively whittle out their season’s best teams. So without further ado, here’s our La Liga Team of the Season 2014/15;

Claudio Bravo made sure Barcelona hardly missed Victor Valdes by keeping 23 clean sheets, La Liga’s highest number, but he may not have been lifting the title were it not for Alves’s sensational performance in the Bernabeu as Valencia held Real Madrid to a 2-2 draw in May.

His penalty save from Cristiano Ronaldo in that game was his 4th stoppage from 9 spot-kicks across the campaign and the Brazilian drew level with Andoni Zubizaretta’s record of 16.

Only 5 ‘keepers made more saves than Alves’s 81 and not one of them were from teams that finished higher than Valencia who shipped just 32 goals, a record bettered by only Barcelona and Atletico.

Alves’s quick reflexes and assuredness behind his defence was a huge factor behind that solidity.

24 year old Mario has been with Villarreal since 2007 and has represented the Yellow Submarine at every level before confirming himself as the first choice right-back at the Madrigal.

His charging runs forward saw him create 23 chances and register 2 assists as well as score 3 goals while his defensive stats are also impressive, nobody at Villarreal made more tackles, interceptions or clearances than the committed full-back.

The diminutive and determined Spaniard played a big part in his club’s qualification for next season’s Europa League.

After a dip in form during the 13/14 season Pique was back to his imperious best for this campaign, averaging 2.1 tackles, 2.2 interceptions and 4.4 clearances per game as Barcelona shipped just 21 goals on their way to claiming another league title.

The 28 year old World Cup winner was also his usual threat in the opposition half, scoring 5 goals as he utilised his experience to come back after a difficult start to life under Luis Enrique.

Manchester United won’t give up their chase for the Argentine but Valencia’s £36 million valuation of the defender is arguably justified after his rock-solid performances at the back this season helped Valencia return to the top 4.

In his first full-season at the Mestalla, the six-foot defender grew into an imposing figure in La Liga, making more clearances, and chipping in with more defensive actions in total, than any other defender in the division.

The 27 year old averaged an impressive 3.5 headers won per game along with 2.9 tackles and 3.1 interceptions, while he could also contribute an important goal, most significantly the header that ended Real Madrid’s 22-match unbeaten run in January.

With 6 goals, he was the league’s highest scoring defender.

When Valencia sold Juan Bernat to Bayern Munich last summer, Los Che were fully aware that his replacement would be swiftly found in the form of the 20 year old Gaya who provided the surging runs of his predecessor as well as a defensive calmness.

Gaya finished a fine campaign with 6 assists and 24 chances created as he picked up a reputation for his darts up the field, while he is also tough and composed in defence.

His fine season did court interest from Real Madrid which Valencia have been quick to try and stymie by tying the Spanish under-21 international down to a long-term deal.

A €4.5 million capture last summer from Reims, Krychowiak puts in a substantial claim to signing of the season as he slotted into the void left behind by Barcelona’s Ivan Rakitic with ease.

Whilst not providing the same influence going forward as the Croatian he has added a steely protection to his defence, making a total of 133 tackles and 96 interceptions, of which only Valencia’s Javi Fuego has made more.

The Polish workhorse played in all of Sevilla’s Europa League games as they marched to eventual success in his home country while he showed everybody the way to stop Lionel Messi with this brilliant tackle.

The fourth Valencia player on this list is the versatile Parejo who has contributed 11 goals and 5 assists to help Nuno Espirito Santo’s team into the Champions League.

Able to create chances, drive the ball forward with a bursting run or protect his back four with intelligence, there is clear reason why he has been one of Santo’s most used players this term with 34 appearances.

His total of 84 successful tackles partnered with the 42 chances he created paints the picture of a widely-gifted midfielder with many strings to his bow while his 13 bookings will indicate his dogged competiveness.

Recovering from a dip in form similarly to Pique, Messi has been irresistible this term as he has evolved into a creative winger who is now more at home cutting in from the right-side.

That new-found style has yielded 18 assists as well as the usual jaw-dropping goal haul of 43, smashing Telmo Zarra’s all-time La Liga goal-scoring record along the way.

From the ignominy of being dropped by Enrique in the defeat in Sociedad in January, Messi bounced back with a scintillating run of form to, along with Neymar and Luis Suarez in a supremely talented front three, drive Barcelona to another clean sweep of trophies.

A truly magnificent player, it was fitting his quick-feet and ability to find space in the most crowded of vicinities earned the league-winning goal at Atletico Madrid.

Coming from a league that is not high in competitiveness and tethered with a mammoth price-tag, Rodriguez has not been fazed by the challenge, producing the excellent form that has racked up 13 goals and 13 assists.

He has kept Isco out of Ancelotti’s starting XI for the majority of the season and in a squad blessed with the firepower of Cristiano Ronaldo and Karim Benzema, his wonderful range of passing has been on show regularly, creating more chances (77) than any of his peers.

The Colombian has also ran his own goal of the season competition, hitting screamers against Granada, Almeria and Malaga.

The Portuguese ended the season without a trophy but it is impossible to leave a player who scored 48 goals and notched up 16 assists out of a season’s best XI.

Like Messi the Portuguese has also evolved, now more of a poacher in the fashion of his Brazilian namesake he has become even more lethal in-front of goal, relying on his powerful physique and unrivalled athleticism to get on the end of balls being played into the box (the remarkable header vs Deportivo a case in point).

Driven by a personal crusade to usurp Messi in the goal-scoring charts, Ronaldo relentlessly attacked the goal, registering 225 shots (a total way higher than any other player) as his flashy dribbles have become of a thing of the past.

Sevilla’s Carlos Bacca, Barcelona’s Luis Suarez and Jonathas, who scored 14 goals for relegated Elche, all have viable claims for this team’s sole-striking spot but Griezmann gets it for scoring 33% of his team’s goals.

Signed for £24 million from Real Sociedad and tasked with filling the gap left behind by Diego Costa’s exit from Atletico’s title-winning side, the French-winger quickly adapted to the physical demands Diego Simeone puts on all his charges and reacted well, missing just a single league game and top-scoring with 22 goals.

The 24 year old was a bundle of energy up-front, constantly harassing opponents and popping up in pockets of space as Simeone looked to shift his side’s style.

It has been no surprise to see Chelsea and Bayern Munich linked with the forward after his successful first season at the Calderon.