Connect in the back of the net
Facebook0
Twitter0
Google+0
I have been very impressed with the quality of football that this summer’s Euros has brought us, and here is my team of the tournament. 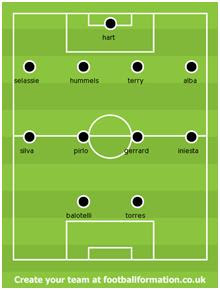 Hart kept 2 clean sheets and only conceded 3 goals in the finals, and was on top form against Italy despite losing 4-2 on penalties. His future definitely looks bright after his impressive displays.

I thought he was absolutely superb for the Czechs throughout the tournament, and looked solid and comfortable when he was asked to attack and he did his defensive duties without too much trouble.


Players like Selassie seem to become overshadowed by ‘bigger players and nations’ far too often, which is wrong for the game.

Hummels was absolutely outstanding throughout the Euros. His heading was top draw, tacking tremendous and his overall leadership over the defence was great to watch.


I believe there will be quite a few clubs trying to negotiate a deal with his club (Borussia Dortmund) for next season.

There are not many defenders like John Terry any more, there just aren’t. Although at times against Sweden he looked lost for pace, his tackling, heading and overall commitment was outstanding, and despite being stripped of the captaincy, he still leads by example.


Even though the ball looked to have crossed the line against Ukraine in England’s final group game, 95% of defenders would not have got anywhere near the ball let at least make contact with it, so that act alone proves that Terry is still one of England’s top centre backs.

Thought he was really comfortable in possession in Spain, and the run he made off of Xavi to score Spain’s second against Italy in last night’s final was fantastic. He truly is a great passer of the ball, his defensive efforts were impressive, too.


At only 23 years of age, he surely has a lot more to give, don’t want to add pressure on him, though.

When I watch Silva, I cannot believe how the ball sticks to his feet, his touch and dribbling accuracy was world class. He thoroughly deserved his goal in the final, and was unfortunate to be subbed as much as he was.


Spain and Manchester City have managed to discover a real gem, and I believe that the £80million price tag that the blues’ have put on him is not a bad valuation after his performances throughout the euros. On second thoughts, maybe £50-60 million is more realistic!

The midfield metronome was ticking from the off. His free kick against Croatia was truly magnificent and the way he just controls the midfield deserves credit. I also feel his work rate is great too, as he makes many unselfish runs.


He may not receive the ball the most times, but he draws the opposition towards him, which ultimately leads to more space so the Italians truly grasp and own the midfield.


However, when Pirlo gets the ball, he makes sure the opposition are put through their paces.

The England captain Stevie G led by example, and he has been recognised all over the world through his efforts in various worldwide media. Enough said.

He won the Euro 2012 player of the tournament after Spain were crowned winners, and the only nation to retain the European Championship title.


He was amazing, the runs he made and he was always available for his team mate, and always trying to find space for not only himself, but his team mates, too.

Super Mario showed his good and bad side in this year’s Euros in Poland & Ukraine, but his two goals against Germany were great, as well as his acrobatic goal in their win over Ireland.


He showed the Balotelli we all like to see, which is seeing him play football well and trying to stay out of trouble, which proved at times difficult. People seem to forget that he is only 21.

Not many thought he would pick up the golden boot after the season Torres had, but scoring 3 goals and 1 assist in 189 minutes isn’t bad going, and its warming to watch a player who had previously been struggling come back to form when his country needs him most.


He is also the first player to score in two consecutive finals.