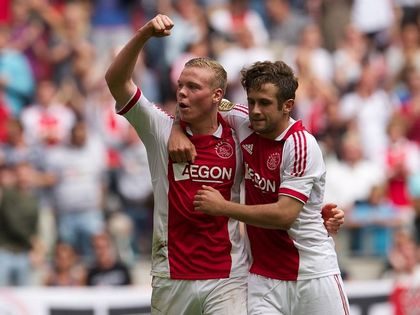 I‘ve written before about my optimism towards Icelandic football. I‘m Icelandic, I’m optimistic in general, so I guess that‘s normal, right?

Our strength always used to be the battle spirit, strong defense and physical strength  Now our players are getting better and better technically and for the first time our national team actually has stronger offensive players than defenders, although our defenders are also quite good.

With better facilities and better players, more and more players are going abroad. The Icelandic league isn‘t that strong to be honest, and if you want to go pro – you have to go abroad. And that‘s what our best players do.

The Dutch Eredivise has been sort of a „developement“ league for a long time. It‘s a good league with good footballers, but players who do good there end up going to the best leagues in Europe. This is nothing new.

For Icelandic players, the Dutch Eredivise has been a great stepping stone towards the bigger leagues. Eidur Gudjohnsen started out at PSV, playing alongside the Brazilian Ronaldo, before he got a serious injury - possibly due to medical negligence - and ended up having to start from scratch. But, anyhow, the rest is history.

A young Gudjohnsen at PSV.

Aron Einar Gunnarsson, the present captain of the Icelandic national team, went from his boyhood club Þór Akureyri to AZ Alkmaar and ended up going to Coventry, and then Cardiff, who are now at the top of the Championship division.

Grétar Rafn Steinsson also went to AZ Alkmaar and then to Bolton. After a successfull career in England he now plays for Kayserispor in Turkey. I could name a bunch of other players that have gone to the Netherlands but I‘ll leave it at that.

The point is, being able to join an Eredivisie team is clearly a very good sign for the Icelandic footballer, as well as footballers from other countries others of course. Therefore, it’s very positive that we‘ve never had more players in this league at the same time than now, to my best knowledge.

After two Icelandic players joined Eredivisie clubs in January, we now have no less than six players in the league. For a country of just over 300,000 people, that’s not bad at all, I would think!

Alfreð Finnbogason joined Heerenveen last autumn and has been tearing the league apart. Despite playing for one of the league‘s lowest teams, he is the joint second-top goalscorer with 15 goals. He scored four goals in a single cup game as well. Definitely a good sign.

The biggest name, albeit a lot of injuries recently, is Ajax’s number nine, Kolbeinn Sigþórsson. He marked his come-back last week with two goals after coming on as a substitute in a cup game, and he is a striker who bangs in the goals when he’s fit. Hopefully he can put his injuries behind him and reach new heights at Ajax – the team spent a fortune on him after he blossomed with AZ Alkmaar.

Ah, yes. AZ Alkmaar. A team that has always been fond of Icelanders. Since Sigþórsson left the club for Ajax, Jóhann Berg Guðmundsson has been the Icelandic “ambassador” in Alkmaar. He joined the youth team from Breiðablik and fought to become a regular in the first team. The 22 year old winger has been playing a lot recently and just earned his 100th cap for AZ Alkmaar last month.

In January, another Icelander, striker Aron Jóhannsson, joined AZ. He came to the club from AGF in Denmark, where he‘s been in astonishing form this season and left the club as the Superliga‘s joint topscorer, despite being injured for a while. If he keeps this form, I‘m positive that he can be a real success in the Netherlands.

Then we have Guðlaugur Victor Pálsson, known abroad only as Victor Pálsson, who plays for NEC Nijmegen. He joined the Liverpool reserve team from AGF, but didn’t quite manage to fight his way into the senior team. From Liverpool he went to the Scottish Premier League side Hibernian, and from there he went to the huge American club New York Red Bulls, where he played alongside Thierry Henry and Rafael Marquez.

Pálsson has been a very good player for Nijmegen since he came there on loan before this season. In fact, he was so good that Nijmegen tied him down until the year 2016. He was rewarded with his first call-up to the senior national team for a friendly against Russia on February 6th. So this move to the Netherlands is definitely working out for him after falling out of order in the Big Apple.

Then we have a new player there as well, who joined in January, and will be interesting to see. Rúnar Már Sigurjónsson, a 22 year old midfielder, just joined PEC Zwolle from Icelandic side Valur. The leap between leagues is definitely huge, but Sigurjónsson was one of the best players in Iceland last summer and it was evident that he‘d be going abroad.

Most people expected him to join a side somewhere in Scandinavia, but he got the chance to go to Holland and hopefully he will do good there. He has certain qualities that make him a terrific midfielder and it will be interesting to see whether he gets the chance to help PEC Zwolle fight for their place in the league.

In addition to the six aforementioned players, we have a few younger guys who now have the chance to train in Holland and break into the senior sides. With all respect to Icelandic football, there’s no question that you can learn more and develop better as a player in Holland, so their future might very well be bright.

Either way, we can talk about a real Icelandic invasion in the Dutch Eredivisie. Although it’s very satisfactory for an Icelandic player to have a career in the Netherlands, of course I can’t but hope that they will follow into the footsteps of Dutch stars such as Robin van Persie, Ruud van Nistelrooy and Wesley Sneijder and have a successful career in even bigger leagues.

Alexander Freyr Einarsson is a journalist for Icelandic football website 433.is.