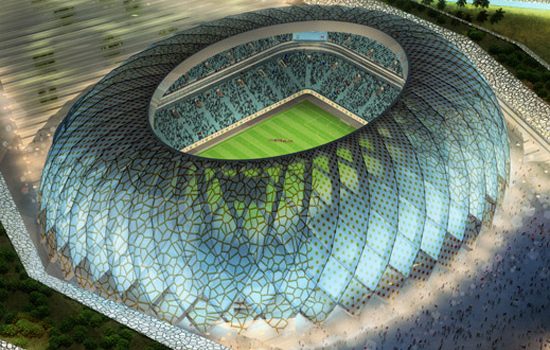 If there was ever any doubt that football was the most popular sport in the world, the number of new football stadiums and the many proposed stadiums would erase it.

Let’s review a handful of the most recent sparkling new professional football fields that are sure to impress fans.

As host to the 2014 World Cup and the 2016 Summer Olympic games, Rio de Janeiro needed a plan for a new football complex. The decision was made to renovate the existing Maracana Stadium to the tune of $440 million.

The stadium’s first event was held in April 2013, but the first official match was a friendly on June 2 between Brazil and England. Before renovations, the stadium was touted as the largest football stadium in the world. The new version reduced seating capacity from 100,000 to 78,000

New luxury suites and facilities for the media and a sports medicine outreach highlight the new stadium. Other ostentatious amenities include 292 toilets that receive water from the roof, eight new television studios, four new locker rooms, and brand new Bermuda Celebration grass that will allow the ball to scoot more quickly.

Qatar won the FIFA bid for the 2022 World Cup, and the country is projecting to build nine new stadiums while refurbishing three old ones. The cost for all of the stadiums is initially estimated to be $4 billion, a small sum compared to the overall infrastructure being planned.

Standing on the shores of the Persian Gulf, Al-Wakrah is a classical Arab desert city, containing a mere 30,000 Arab citizens but with a burgeoning expat population that is building the city and its stadiums with Qatari oil wealth.

So-called soccer specific stadiums (SSS) have been all the rage for MLS franchises in recent years. The newest SSS was built for the Houston Dynamo in Houston, Texas, in 2012. BBVA Compass Stadium is the first SSS built in an American downtown.

Dozens of proposed stadiums worldwide are in various stages of planning, including a series of stadiums in Russia, which will host the 2018 World Cup, and France and England. MLS franchises in Washington, D.C. and New York City also have stadiums in the works.

Byline: Jackson Willis blogs about topics as varied as football in his native Seattle, WA, to the field services needed for the world’s greatest construction projects.