Do Overpaid Football Players Encourage Or Discourage Participation In The Game?

Do Overpaid Football Players Encourage Or Discourage Participation In The Game?

Getting the nation fit and active is a huge challenge. Sports leagues are a great way to do this, and one of the most popular sports is, unsurprisingly, football. Football is the worlds most popular sport with an enormous worldwide audience, as a result there’s a huge amount of money in the beautiful game.

But one of the negative factors associated with the game is the astronomical wages demanded by the top players. With wages continuing to increase, the question of whether these overpaid players encourage or discourage participation is an important one.

David Beckham, Wayne Rooney, Lionel Messi – these football players, and others superstars of the sport, are household names around the world. But not only do they have exceptional talents – they also earn huge amounts of money.

Messi’s base salary is currently $15.44 million after agreeing to a new deal with Barcelona in December 2012. However, with all of the added bonuses, he will be paid a massive $44.68 million in 2013 – and that’s not even counting his sponsorship deals.

The money is staggering – but is it a good thing? 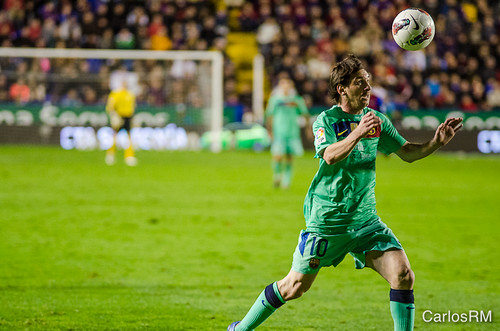 Young boys have always dreamed of being star football players. However, whereas in the past this was mainly driven by a love of the game and the idea of being a hero, these days there is another incentive: money.

Soccer players are very wealthy celebrities, and many lead lifestyles that most people can only dream of. As a result, it is not hard to assume that many young people are drawn to the game by their desire for the fame and riches that go with being a top player.

There are fears that if young boys are dreaming of the lifestyles that go with being rich, and who are regularly influenced by the antics of various high-profile football players in the media, they will go into the game for all the wrong reasons.

However, whatever the fears that young people will be attracted to the sport for the wrong reasons, it seems that something altogether different is happening: participation in the sport is actually falling.

Back in 2011, the BBC reported on the falling numbers of participation in grassroots football in England. The amount of people participating in soccer was falling, and the drop was especially significant in the 16-to-19 year group.

The FA was threatened by Sport England with the withdrawal of funding to the tune of £25 million, and it was so concerned that it launched the Just Play initiative.

So what is this fall in participation linked to?

There are a number of possible reasons, including fewer referees, the growing popularity of computer games and busier lifestyles. However, whatever the cause, it is clear that the rising amount of money being paid to the superstars of the sport is not exactly boosting participation in the game.

Most people participating in a football league will not be encouraged or discouraged by the wages of professional players – after all, they are not trying to make a career out of it. However, the danger is that the average fan can start to feel disconnected with football.

When fans start to see players who care more about money than football, this could have an adverse impact on fans – especially if higher wages are funded by higher-priced tickets on match day.

Authorities Need to Invest at a Grassroots Level

Whether or not overpaid football players are having a positive or negative effect on participation, one argument is clear: more needs to be done to put money into grassroots facilities to encourage greater participation in the sport from schools through to casual local leagues.

Youngsters will look up to the top players, and they may even want to emulate their lifestyles. But it is a love of the game that should be promoted more than anything, and this is where promoting local leagues and investing in local facilities is really going to pay off.

John is a feature writer and football fan from the UK.