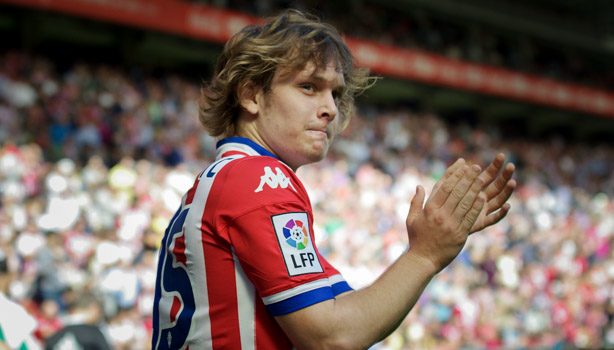 Barcelona’s recent policy of loaning out or even selling their brightest youngsters with a buy-back clause rather than giving them a chance in the first-team at the Camp Nou has been much criticised. However in the case of Alen Halilovic, who is impressing in La Liga on loan at Sporting Gijon this season, their approach seems to be justified.

Halilovic is a talented 19 year old who despite having already earned seven caps for Croatia, has only got 29 minutes of first team action under his belt for Barcelona’s first team.

Faced with another season on the fringes of the picture at the Camp Nou, he was loaned out to newly promoted Primera Division side Sporting Gijon in the summer and he has seized the opportunity to play regular first team football with both hands.

Key creator with an impressive partnership with Lora

Playing in an attacking midfield role generally on the right hand side he has helped create opportunities for fellow teenager Arnaldo Santabria up front as a young Sporting Gijon side have offered more going forward than many expected they would.

He has been an integral part of the team and a key reason why Sporting are currently three places outside the drop-zone and in with a good chance of extending their stay in the top flight.

He has also forged an impressive relationship down the right flank with full-back Alberto Lora and the ease with which he has slotted into this side should serve him well on his return to the Camp Nou which is due to come at the end of the season, but could yet be extended.

Not the finished article, but has talent in abundance

Halilovic is not the finished article but he has all the attributes that you associate with Barcelona players. At 5 foot 7 inches, like most of the club’s current stars, he is not the tallest but is blessed with an abundance of technical ability and has always looked like someone with the qualities to go far in the game.

What he has developed in Gijon, is his willingness to work hard, press the ball and evolve his game from a tactical perspective. He has always had a reputation as something of a fiery character and displays of frustration at being substituted by Barca B last term didn’t go down well with Luis Enrique or his staff.

However there has been little evidence of that this year and he seems to have channeled his natural aggression into a positive thing and both team-mates and supporters at El Molinón, have clearly taken to the young Croatian, who they already regard as one of their own.

2016 could be the year Halilovic really explodes onto the European football spectrum. If he continues his current form he has a good chance of featuring at Euro 2016 for Croatia. If all goes well and Luis Enrique decides against loaning out the 19 year old again he should be well equipped to at least be a prominent member of the Barcelona squad next term.

His versatility and the fact that he is still developing his game mean there are numerous ways he could fit into the side. If he continues to score goals, which he did in midweek when he netted a brace against Real Betis in the Copa Del Rey he could perhaps fill the void left by Pedro as the most obvious back-up to the front three of Leo Messi, Neymar and Luis Suarez who clearly will all be very hard to displace.

Alternatively Halilovic could slot into a deeper role if required and could develop into a very useful member of the Barca squad.