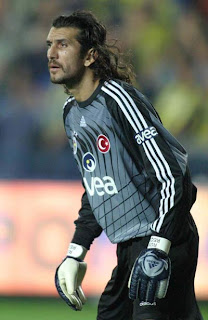 Born on the 10th May 1973, Rüştü Reçber went onto become the most decorated goalkeeper in the Turkish Super League. The Korkuteli born keeper’s career spanned from Antalyaspor to the dizzy heights at Barcelona.


With 5 league titles (4 with Fenerbahçe, 1 with Beşiktas), 2 Turkish Cups and an impressive international career Rustu takes his place in the greatest Turkish league XI. 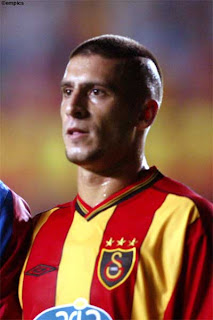 Part of Galatasaray’s golden generation, Umit Davala won 4 Super Leagues, 3 Turkish Cups , the Uefa Cup and the Super Cup. Davala was a powerful wingback who frequently got forward to provide for the strikers, the Mannheim born defender went on to play for AC Milan and lift the Bundesliga in Germany. 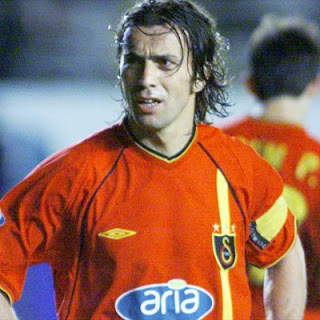 Bulent Korkmaz was the heartbeat of the Galatasaray team which dominated Turkish football in the 90‘s. The captain known as ‘Brave heart’ won an astonishing 8 league titles, 6 Turkish Cups, the Uefa Cup, the Super Cup and captained the Turkish national team to 3rd place in the World Cup.

Diego Lugano was relatively unknown when he joined Fenerbahce for €7.5 million back in 2006, but after 5 years in the Turkish Super League he most definitely left his mark. The tough tackling defender who helped Fenerbahce win two league titles was known to the fans as ‘TOTA’ (Talento, Orgullo, Tecnico, Ambicion - Talent, Pride, Skillfulness, Ambition in Spanish).

With a a rocket left foot, willingness to get forward and winning mentality the hard working left back was Turkey’s answer to Roberto Carlos. Hakan Unsal won a total of 5 leagues with Galatasaray, 4 Turkish Cups, the Uefa Cup and the Super Cup.

The “Maradona of the Bosphorus” Emre broke into the Galatasaray squad at the tender age of 16 in the 96-97 season. The combative but creative midfielder won 4 Turkish Super League titles, 2 Turkish Cups, 1 UEFA Cup, and 1 UEFA Super Cup all by the age of 21 and went on to win his 5th league title with Fenerbahce in 2011.


If it wasn’t for the persistent injuries, Emre surely would still have been plying his trade at the top clubs in Europe.

When Blackburn manager Mark Huges was asked if he too wished Tugay was ten years younger he responded, “No, because if he was, he’d be playing in a Barcelona shirt.” The deep lying playmaker was truly a player before his time. He had the ability to pick out players from deep within his own half much like Pirlo or Xavi Alonso of present day.


The “Pass-master” won 6 league titles & 4 Turkish Cups with Galatasaray, the Scotish Premier League with Rangers, the League Cup with Blackburn and was instrumental in Turkey’s 3rd place finish in the 2002 World Cup.

When Hagi arrived at Galatasaray in 96, many people believed the Istanbul Giants were investing in a gifted but problematic player whose best days were behind him. However as French ex-international Luis Fernández stated “Hagi is like wine, the older it gets, the better it is”. The Romanian international enjoyed the best season of his career at the age of 35 (99/00 season) winning every possible trophy with Galatasaray.


Hagi won 4 leagues, 2 Turkish Cups, a UEFA Cup and the UEFA Super Cup in his 5 years with Galatasaray earning him the title of the best foreign player ever to play in the Turkish Super League.

Sergen Yalcin was a player destined to play at the highest level of club football if it wasn’t for his lack of professionalism. However, this did not stop him from becoming one of the Turkish Super League’s most memorable players.


The enigmatic midfielder played for Besiktas, Fenerbahce, Galatasaray and Trabzonspor, winning 6 leagues (4 with Besiktas and 2 with Galatasaray) and 2 Turkish Cups in the process.

If Tugay was a man before his time then Alex is one of a dying breed.  The Brazilian playmaker is one of the last remaining “old school” number 10s. Alex is the archetypal playmaker, using technique, skill and intelligence rather than power to dictate the play.


He is the brains of the Fenerbahce team, pulling the strings from the centre of the park and controls the tempo of play. The Brazilian international has won 3 league titles with Fenerbahce racking up 152 and 136 assists in 302 games.

The “Bull of the Bosphorus” is the all-time top goal scorer in the league with 249 goals in 488 games. Known for his prowess in the air the 1.91m tall striker was equally adept with the ball at his feet. Suker is one of the most prolific strikers of the modern era with a career total of 383 goals.


The “Goal-Machine” lead Galatasaray to 8 league titles, a Uefa Cup, 5 Turkish Cups and scored the fastest ever goal (11 seconds) against South Korea in the 2002 World Cup.


Written by Emre Sarigul
Follow on Twitter @Turkish_Futbol and check out their excellent site that covers everything Turkish football, Turkish Football