Home / NewsNow-1 / Marc Navarro: The Journey from Barcelona to the Watford bench

Marc Navarro: The Journey from Barcelona to the Watford bench 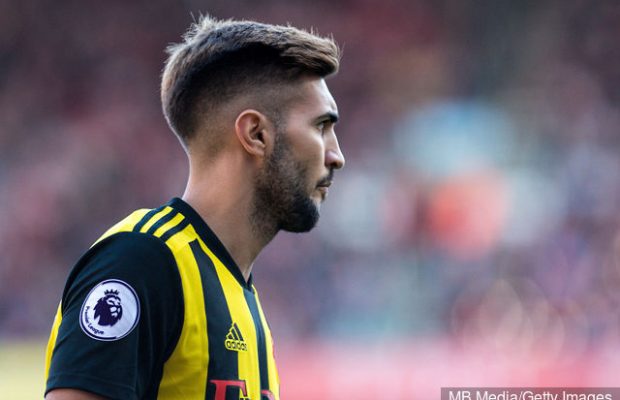 On the FIFA World Cup eve, Spanish football was rocked by Julen Lopetegui’s debacle. The newly appointed Real Madrid coach was forcefully withdrawn from the tournament, replaced by Fernando Hierro. It was a massive setback to the 2014 champions.

Amidst the whole tragedy, however, a former Barcelona starlet was fulfilling his Premier League dreams – an unusual career path for a La Masia graduate. Marc Navarro joined Watford on a five-year deal, though for an undisclosed fee from Espanyol.

Javi Garcia set up something of a Spanish dynasty at Vicarage Road. There wasn’t any boring moment for his latest inductee in Hertfordshire as he had both former Real Madrid and Barca trainees Kiko Femenia and Gerard Deulofeu as a company.

“Marc has attracted interest from a host of top European clubs, therefore we are delighted to have secured his services,” Watford’s chief executive Scott Duxbury told the club’s website.

Navarro joined highly-revered. A Catalonia born and bred, he grew and schooled in the autonomous community. Kids in the region dreamt of just two sports; basketball and football. Young Navarro opted for the latter.

Building a successful career at Barcelona isn’t a piece of cake. Just a few young lads managed to make it to the big stage. With La Masia talents becoming insufficient, the club’s hierarchy turned to mercenary imports.

Navarro was well aware of this migraine. He started off at lower side CF Badalona in 2001 at just six. Despite his tender age, he exhibited something quite astute. Just one year with the Segunda club was enough to alert the scouts of big brothers Barcelona.

The young defender didn’t stop there. His development was fast-tracked due to superior skill set and physique. He was heralded to break into the main team sooner rather than later. But that never happened. Navarro’s progress somehow stalled and Barca was glad to allow him to leave.

Espanyol saw what their bigger neighbours didn’t. Navarro was just 16 when he made the move and was given comfort at RCDE Stadium. He spent two years with the developmental squad. As soon as he clocked 18, the defender was farmed to Damn to gain first-team experience.

He returned with plenty. Still, he had to prove his worth with the club’s reserve team. There he spent three years, racking up 44 appearances and eight goals. At that point, there was no how the senior managers could resist.

Navarro was eager to make good use of his opportunity. He had waited seven years to be considered. The defender didn’t disappoint. Navarro started and scored on his debut in January 2017 in a memorable 3-1 victory over Granada. That made him the first youth graduate to achieve the feat since Raúl Tamudo in 1997.

Still dissatisfied, he wanted to do more. Navarro was rewarded with another starting berth and further proved his value. He netted the only goal in the club’s 3-1 defeat by Sevilla. Samuele Longo was the last Espanyol player to achieve such in his first two games in the 2012/13 campaign.

Navarro finished the campaign superbly, garnering a dozen appearances. He was rewarded with a bumper deal and played an even bigger role last season. Navarro featured 24 times for Quique Sanchez Flores’ team which finished 11th.

At Watford, he was expected to stroll into the first team, displacing Daryl Janmaat on the right side of the defence. His versatility was an added advantage, especially after Garcia strived deal with a number of injuries last season.

Sadly, this isn’t the case. Navarro has been reduced to a mere spectator. His only appeared once in the Premier League – his debut against Arsenal in September. He started just thrice in all competitions, none since the year’s turn.

Navarro is already being touted for a swift home return. It won’t be a surprise.