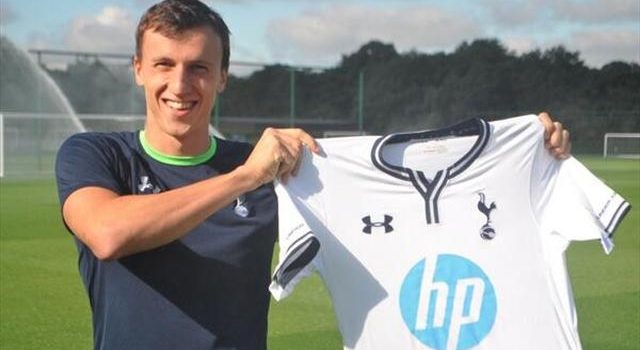 Vlad Chiriches, aka “Vlad the Impaler”, is a 23-year old Romanian defender. He is a versatile player; while his main position is centre-back, he can be used on either side of the pitch, and can also be utilised as a DM.

His style of play has been likened to that of both David Luiz and Thiago Silva. He is extremely technical, has great finishing and long shots, superb tackles, and can put in incredible long balls/passes to his team-mates. His only real weakness is his aerial abilities - his headers are average at best, although he will certainly continue to improve over the coming seasons now that he’s at one of the best clubs in England.

Concerning the transfer, Vlad’s road to London has been a rocky one. Some of the best clubs in the world have been monitoring and making offers for him since last summer. These include and are not limited to: Chelsea, Manchester City, Barcelona, Real Madrid, Atletico de Madrid, AC Milan, Inter Milan, AS Roma, Lyon, Rubin Kazan, and Zenit St. Petersburg.

The only clubs to have actually made offers are Zenit, Atletico Madrid, Roma, Milan, and obviously Spurs. Milan wanted him on loan with a future fee and Roma couldn’t offer more than 6-7m euros.

Now on to the real interesting part of the whole ordeal. About a month ago, Gigi Becali, Steaua’s insane and currently jailed owner, accepted an 8m euros offer from Tottenham for the player. After many reports from the players’ agent, as well as the Romanian FA, that the deal was almost 100% complete and only required Vlad’s signature, the lunatic of an owner pulled out of the deal.

The alleged reason for doing so was that Spurs wanted to wrap up the deal quickly and not allow Chiriches to play in the CL qualifier game vs. Dinamo Tbilisi. Gigi got mad and reportedly said: “Who are Tottenham? Why can’t they wait? Don’t do the transfer! I’m not selling! I am Gigi Becali!”

Becali: The maniac in his usual state of profound thought.

A few days after the deal was cancelled, new reports came out that there other, more likely reasons for the plug being pulled at the last minute. Apparently, Tottenham only offered Steaua only a couple million euros up front, with most of the previously agreed fee of 8 million euros to be paid in monthly installments until 2015.

Almost a month after this incident, Steaua were playing against Legia Warsaw from Poland for a place in the Champions League group stage. After drawing the first leg 1-1 (without Chiriches in the squad), despite a dominant performance from Steaua, they received another offer from Spurs for the player.

Becali’s mood seemed to have improved and both sides were able to agree on a fee of 9.5 million euros to be paid up front. The negotiations continued until the second leg of the CL qualifier, in which Steaua were able to qualify (again without Chiriches), and it was confirmed that Vlad was going to be on his way to London to sign with the club who’ve been overly active in this summer’s transfer window.

A Twitter parody account in the name of the club’s technical director, Franco Baldini, even posted an image of Chiriches’ atop the body of Maximus Decimus Meridius from the film “Gladiator (2000).”

So that’s it regarding Vlad Chiriches’ big break to the best league in the world. He and Romanian fans will be hoping that he will soon manage to keep a starting spot at the club and show his class at highest level.

As such a unique and talented player, many believe he deserves it and can become one of the world’s best defenders in the future.