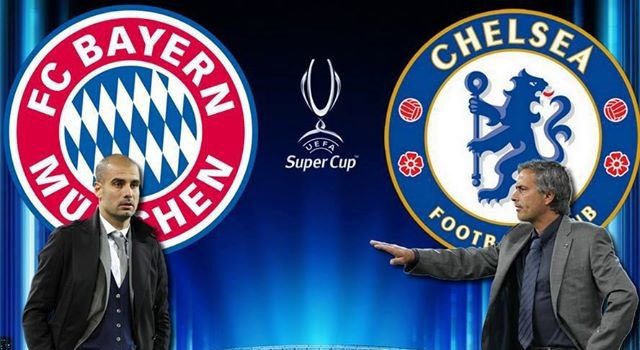 Sometimes I wonder who writes these scripts. You know, Josep ‘Pep’ Guardiola returns from his sabbatical and Mourinho is back at his ‘beloved’ Chelsea. What happens next? They face-off in Europe for a very important ‘winner takes-all’ game. Whoever is victorious will not only smile home with the trophy, but also the upper hand in their never ending rivalry.

Mourinho stoked the fire recently by throwing tantrums at Pep, questioning his coaching abilities. The revered Managerial great hasn’t replied the Portuguese coaching legend, but Uli Hoeness, President of Bayern Munich has defended his current manager in the light of comments made by Jose. All these and more will make Friday’s game hugely entertaining.

For all those who are ardent followers and keen admirers of the Super Cup, you must be used to the fact that it has always been played in the principality (Monaco). The St Louis II Stadium has hosted the game since 1998. However, that has changed this year. Friday’s showpiece match will now be played at the Eden Arena, Prague-Czech Republic.

As a result of Super Cup commitment, Bayern had to play Freiburg in the Bundesliga and that ended in a disappointing draw for the Bavarians. Pep rested some of the big names for the big one in Prague.

Jose Mourinho also had to take his men to Old Trafford with the intention of becoming the first club to achieve the distinction of defeating Manchester United on their own turf two times in a Calendar year. It finished nil-nil in a rather stoic affair. Attention has shifted to the Super Cup clash.

For Mourinho, he is about to win a trophy he will not have deserved, considering the fact that is another of his adversary, Rafa Benitez, who led the blues to EUROPA LEAGUE glory in Amsterdam. It is a classic tale of ‘what goes around, comes around’.

When the now Napoli boss (BENITEZ) took over as Inter boss in the Summer of 2010 following Mourinho’s exit, the latter criticised his successor, complaining that if Benitez hoists any of the trophies he qualified the Nerazzurri for, the glory would be his, rather than that of the new boss.

The Spaniard went on to lose the Super Cup, but made amends in the World Club Cup. Now the table has turned and it is Jose who might be at the wrong end of the words he blatantly uttered three years ago. Knowing how proud and arrogant he is, he might just hand the trophy over to Bayern if he can.

Bayern Munich and Chelsea are the last two clubs to win the UEFA Champions League and coincidentally, it was Chelsea who inflicted one of the most crushing defeats on FC Hollywood last year in a pulsating final at the Allianz Arena.

Incidentally, it was Drogba’s last kick for the 3-time Premier League Champions which sealed the club’s maiden UCL triumph. The Ivorian has since moved on to China and most recently, Turkey, wearing the famous colours of Fatih Terim’s Galatasaray. No matter what they say in public, the Bavarians will want nothing short of victory in Friday’s ‘very important game’.

More significant because Chelsea are now better equipped than two seasons ago and ‘The Special One’ has returned to the helm. Bayern have also strengthened. Bringing in the likes of Mario Gotze, Thiago Alcantara (out for 7 weeks) and shipping off both Luis Gustavo and Mario Gomez to Wolfsburg and Fiorentina, respectively. Mourinho has been very busy in the Transfer Market too, recruiting the likes of Mario Van Ginkel, Andre Schurrle, Wallace and Willian.

Irrespective of all these, it is the continued exemption of Mata from the Starting eleven that is a source of worry for fans and admirers of the 2-time Chelsea player of the year. The club’s most consistent performer of the last two seasons now finds himself on the periphery of the new manager’s plans. We have been hearing that he is carrying an injury.

That doesn’t take the biscuit in my opinion. Mou clearly prefers the industry of Kev De Bruyne and I can understand why. It’s his choice and he clearly has his own strategy. Suitors are coming thick and fast for the brilliant playmaker (Mata).

Chelsea will need to be at the top of their game to avoid a repeat of ‘THE FALCAO SHOW’ which happened last year in Monaco. It was Chelsea-Atletico Madrid then with the Blues=European Champions and Los Rojiblancos, Europa League winners. That was where the difference ended.

Colombian Tiger, Radamel Falcao continued from where he left off in the Europa League, scoring a perfect hat-trick v the pensioners in a match that ended 4-1 in favour of El Cholo’s Colchoneros. Little did he know that one year on, the Principality would be his home for the foreseeable future.

We don’t expect a high scoring encounter considering the capabilities of both teams’ rearguard - but in football, we have learnt never to say never. It will be the Blues’ second straight appearance in what a few of us have tagged ‘THE CHAMPIONS GONG’. Bayern haven’t been in this situation in twelve years, so we can pardon them if they treat it with utmost necessity.

The heavy burden of being ‘European Champions’ and ‘The Best team in the World’ might weigh down on their shoulders anytime soon. They, nevertheless, would want a longer reign than Barcelona in this regard.

To continue to occupy the throne, they must first defeat Chelsea and then focus on December’s Club World Cup. The win is more important because they were undone by Dortmund in the Domestic Super Cup a few weeks ago. That memory still lingers on, until something of note temporarily erases it.

The Bavarians will be extremely delighted to play a Drogba-less Chelsea after all the harm the Ivorian has caused in meetings of the past seven years. Oliver Khan once stated that Double D (Drogba) is the best striker he faced in his immensely exceptional career. That is some compliment considering the fact that Ronaldo Da Lima sent him to the cleaners eleven years ago in the World Cup title match.

But there is a man who can have as big an influence as Didier in Mourinho’s squad. He is Romelu Lukaku. The Belgian starlet scored 17 League goals for West Brom last season, including a 45 minute hat-trick against Manchester United. Any one who has such an impressive RESUME can do damage at any level, given the chance.

If he gets the nod to spearhead the attack, the likes of Dante and Boateng must keep a close eye on him. The trio of Oscar-Hazard-Ramires have featured in all three Mourinho managed games so far. Goes to show how highly he rates them. Lampard’s starting berth might be threatened now, with the arrival of WILLIAN. Th ex-Anzhi and Shakhtar playmaker signed for the Europa League winners rather than Tottenham Hotspur

For Chelsea, the likes of Franck Ribery (Nominee for UEFA PLAYER OF THE YEAR alongside Leo Messi and Cristiano Ronaldo), Arjen Robben (who Mourinho and Chelsea know so well), Mario Mandzukic, Bastian Schweinsteiger (doubtful for the clash)-unarguably the best midfielder in Europe this year, and Thomas Mueller are the biggest threats to their ambition of becoming holders of the 2013 UEFA SUPER CUP.

The ROBBERY(ROBBEN-RIBERY) gang were unplayable last season and have continued in similar fashion this term. Last Saturday, they scored two beauties to win the Bavarian Derby vs a stubborn Nurnberg. Robben’s the peak of the double. Thomas Mueller has grown into one of the best players in the world since his excellent performance at the 2010 World Cup.

When he is called upon, he rarely fails to deliver. Mandzukic was the reason why Gomez headed to Italy. The Croat has grown in leaps and bounds since his arrival from the Volkswagen Arena last summer. Has been a regular in all of Pep’s starting line-ups since the beginning of the season. Schweini is the dominant force in the Bayern midfield.

Never one to shy away from the big ones. An excellent ball distributor, a great tackler and one with an eye for goal is the complete package. The Bundesliga Champions are such a lucky bunch. It is a pity that Thiago will be unavailable for the Treble winners. However, there are so many options in midfield and attack. He won’t be missed.

For both teams, pride and history are at stake…and then the small matter of managerial supremacy between two of the greatest managers of all time. Although, Pep has the big H2H advantage, if he loses this to Mourinho, it would perhaps be the most excruciating loss of his career yet.

The Chelsea coach will want nothing more than victory over his biggest rival of the last five years. How sweet it will taste.

Bayern can lay claims to the fact that they have the best eleven in European club football at the moment. Most of their players are top five in the world in their respective positions. That says a lot. The game might be decided by small details and Cech/Neuer might well be decisive too. There’s an old saying that attack wins games, defence wins titles.

Without a strong rearguard, the possibility to accumulating titles in world football is very slim. Jose Mourinho started the Manchester United game without a recognised striker. He is unlikely to repeat the same on Friday. The ‘False NINE’ tactic is not one of his strong points and would have backfired if RVP and co were not profligate in front of goal.

The bulk of the team that featured at the Theatre of Dreams will again be called upon - De Bruyne and Schurrle may have to start from the bench.