Kyle Walker: Why Tottenham are under no pressure to sell him 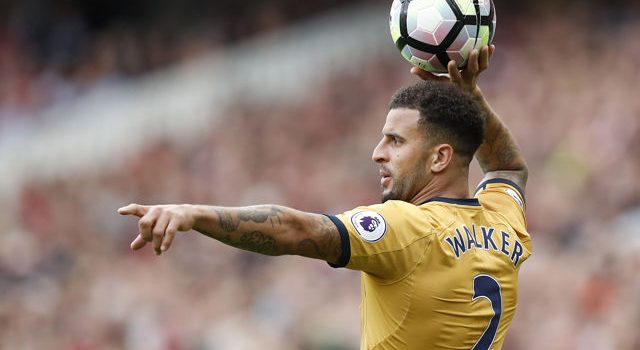 Kyle Walker: Why Tottenham are under no pressure to sell him

The England right-back will decide his future after talks with Spurs boss Mauricio Pochettino at the end of the season.

The speedy full-back has impressed this season and has garnered many admirers, in the Premier League and across Europe.

There exists serious interest from Manchester United and Chelsea – whilst reports in Germany are also speculating that Bayern Munich have lodged an inquiry.

Walker currently earns £70,000 at White Hart Lane, having signed a new deal last summer, but all of his potential suitors would be willing to offer a lot more.

If Spurs are to keep hold of Walker, they might have to improve his current deal and make him one of the top earners at the club.

Walker was said to be unhappy at being left out of Spurs’ 4-2 semi-final defeat to Chelsea on Saturday, adding fuel to the whispers of his departure.

Under no pressure to sell

If Spurs do decide to let Kyle walk it will only be because of an offer they cannot refuse; Pochettino is under no pressure to sell.

Spurs’ finances are in shape, but with a new stadium heading Tottenham’s way, transfer funds will inevitably be tight.

As such, Levy has promised Pochettino authority over who leaves his squad as the kitty available to him in the summer will surely be more stringent.