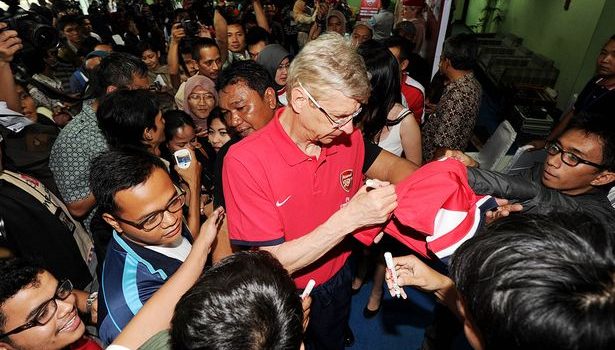 Pre-season friendlies are an established part of football’s close season. With the pressure of the various league competitions forcing clubs to be ready to hit the ground running, friendlies play an important role in ensuring players’ fitness and bedding in new signings.

Having spent several weeks with little to no physical exertion, footballers can be forgiven for being sluggish in their first few weeks of training. More than this, the summer transfer window sees the majority of teams face at least some upheaval in their squads, as departures need to be plugged and new faces accepted.

Additionally, coaches can play around with new formations and blood potential stars, luxuries not permitted in the ultra-competitive league format. Over recent years, however, friendlies have created more and more media interest.

Real Madrid’s pre-season match against Shamrock Rovers, featuring the debut of the one-and-only Cristiano Ronaldo, was a tepid affair, settled only by a late Benzema goal. Having spent over 180-million-pounds that summer, many expected Real to annihilate their opponents. The score, though, was not where the popular interest lay. The match was an exhibition, an opportunity for Real to showcase the attacking talent that they held, and to allow salivating fans their first chance of seeing Ronaldo in action.

More than this, the friendly served as a glorified fitness check, ensuring the Madrid players were in acceptable shape. Friendly in name only, this type of fixture does possess a serious drawback – the attitude of the opponents. Refusing to lie down and die, Shamrock attempted to match their superior foes through sheer physicality. Although an accepted part of football, a problem for managers is the risk of losing their star players to injury in an ultimately meaningless friendly.

Another footballing superpower, Manchester United, took a different approach to their pre-season preparations. Renowned for having a huge following in the Far East, United took the team to them, playing a series of fixtures in China. This not only swells their coffers in the short-term through merchandising, but also serves to raise their profile even higher.

Additionally, their friendlies against inferior opponents have allowed new summer signings acquired in previous years such as Michael Owen a chance to show his prowess by netting four goals in as many matches. This helped eases fans’ worries over his suitability for the team, and encouraged high hopes heading into that season. United’s financial gains were surely welcomed, but is this reason enough to justify the trip?

Every club must balance their accounts, but United may well have let greed choose an unsuitable pre-season. Another example of a pre-season friendly that raised the hopes of fans and players alike is provided by Villarreal’s 27-0 demolition of third-division Navata in 2009. Whilst United’s success on tour and Villarreal’s record-breaking victory can have a psychological impact on the team and the fans, that wasn’t why they were scheduled.

Results aren’t important in friendlies. An example of this: Newcastle’s 6-1 humiliation at the hands of League One side Leyton Orient. It was a result that hinted at the possibility of malaise gripping the club, but it doesn’t hide the talent still resting there. The fixture meant nothing to the players who would have shown more fight in a competitive match. Although it would have been another blow to severely weakened morale, that one result will have no effect on the club’s overall season.

Symbolic of the hyperbolic world of friendlies was the Wembley Cup, a competition featuring Tottenham Hotspur, Barcelona, Celtic and Egyptian Champions Al-Ahly. This served the traditional purpose of a pre-season competition by allowing players to adjust into vaguely competitive football again.

However, the marketing aspect of the competition demonstrated how serious friendlies could be, portraying a glorified training session as one of the prizes of European football. The crowds that swelled to Wembley (with a two-day ticket reaching £100) illustrated the moneymaking potential of pre-season, and football as a whole.

Friendlies should be merely opportunities for players to prepare for the upcoming campaigns. Instead, they become more victims of football’s obsessive media scrutiny. Victories and defeats should count for nothing, but are seized upon and used as evidence to praise or vilify players and teams. These stories are lapped up by fans, desperate for any indication of how their team will fare in the coming season.

The financial side of friendlies just demonstrates how commercial modern football is, with fans charged for the privilege of watching their team prepare.