The Manchester Musings: Why Herrera is a United fan favorite 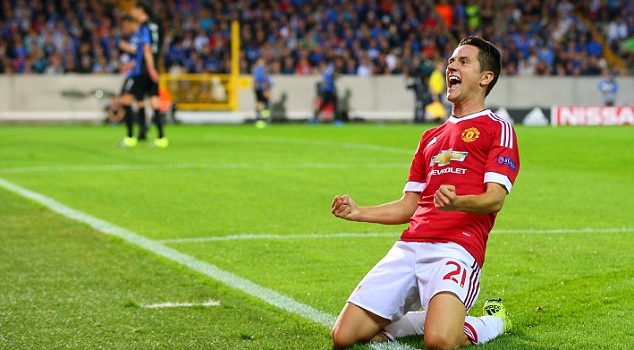 The Manchester Musings: Why Herrera is a United fan favorite

A day which saw great progress at Old Trafford - United moving out of 6th (yes, actually), but then moving back to the place they have occupied since November.

Manchester United’s 2-0 win over Watford, coupled with Liverpool’s win over Spurs by the same scoreline, meant that there were only 2 points separating 2nd and 6th in the Premier League at the close of the weekend.

United lined up with a couple of changes - Daley Blind came in at left back for Marcos Rojo, while more importantly, Anthony Martial started on the left of midfield.

Mourinho has used his brand of leadership to try and get the best out of the French forward, and this was another chance for Martial to really cement his place in the starting XI.

Juan Mata was played out wide with Henrikh Mkhitaryan occupying the No. 10 role behind Zlatan Ibrahimovic.

New loanee Tom Cleverley was in the heart of midfield against the club where he made his name.

Some of United’s best football

The first half was some of the best football United have played all season.

Watford played quite openly, with the ball going to M’Baye Niang at all times to try and create something.

Both teams had early feeler shots, but nothing to trouble the keepers.

Suddenly around the 20 minute mark, United really began to take a commanding position in the game.

Juan Mata was getting in behind the CB’s and the resulting space allowed the home team to really expose Watford.

Herrera and Pogba kept winning the ball in midfield and setting the 3 Ms (Mata/Mkhitaryan/Martial) free to run at the defence.

Martial in particular had the beating of Craig Cathcart, even though he didn’t create anything.

Some of the biggest chances came from a Paul Pogba long shot saved by Gomes, an Ibrahimovic shot straight at the Brazilian keeper, a Pogba first time shot in the box saved on the stretch, and Mkhitaryan blazing over from just inside the box on a cutback.

All the above chances came within 5 minutes of each other, and one more soon came that was in fact converted.

The ball was played to Juan Mata, who spun while playing the first time ball to Mkhitaryan.

The Armenian then set Anthony Martial free, who went on one of his runs at Cathcart before squaring the box.

Mata (who was continuing his run) kept his eyes on the ball to sweep it in from the near post. It was a deserved lead for United and the fans were thoroughly entertained as the half ended.

Soon after the restart, United were 2-0 up and from then on it was effectively game over.

Herrera won the ball in midfield and played it square to Pogba, who saw Ibrahimovic making a run and played a first time through ball.

Ibrahimovic was under pressure from the centre back, and he cushioned another first time pass for Martial who was now through on goal.

The Frenchman cut in on his right foot, and then took his time to spot an opportunity.

One such opportunity duly presented itself at the near post, and it was an open net for Martial to score.

The game was over as a contest at that point, even if Watford did threaten around the 80 minute mark.

Mauro Zarate nearly hit the postage stamp from a free kick that was saved by De Gea, and Troy Deeney continued to make a nuisance of himself up front.

However the game then petered out to a conclusion, and it was another three points for United.

Cup competitions mean that their next Premier League encounter is on the 4th of March - following the Europa League first leg, an FA Cup tie away at Blackburn, the Europa League second leg, and then the EFL Cup final vs Southampton at Wembley.

Ander Herrera is now one of the first names on the teamsheet for Jose Mourinho, and watching him vs Watford was an excellent reason in why.

Both Herrera and Pogba were tasked with being all action midfielders in a two man midfield, and it suited them well.

Herrera played as the deeper one of the two, but he was immense.

His passing was tidy (90% completion normally when recycling position or on the half turn), but his tackling was immense.

7 tackles and 2 interceptions meant that he was constantly turning defence into attack, and it was a reason for why the wingers didn’t have to track back too often.

Smalling and Bailly noticeably fed Herrera as the match went on, and the Spaniard had the second most number of touches in the game after Pogba.

Quietly goes about his business

Herrera naturally deferred to his more illustrious midfield partner, but quietly went about his game.

It was a very good performance from one of the United fan favourites.