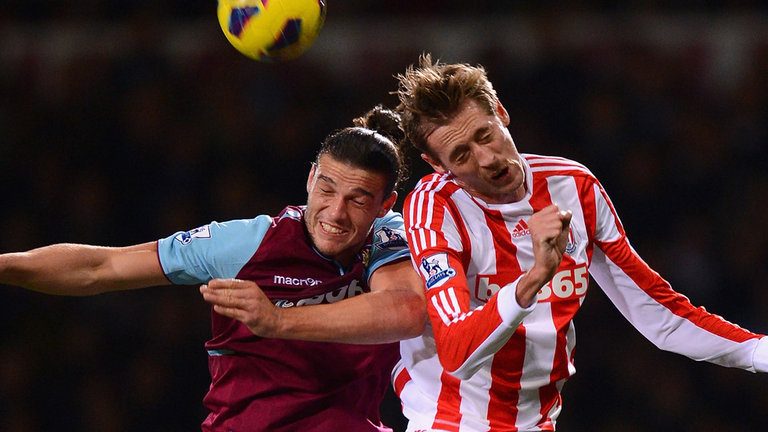 Peter Crouch has just notched up his century of Premier League goals.

Andy Carroll looks on the verge of an England recall and Fernando Llorente has been forced to confess he is “happy” at Swansea because of links with a move to Chelsea.

So… I ask the question: Is this the return of the big man up top?

Sam Allardyce would be rubbing his hands with glee at such a statement, if he wasn’t lying under a table somewhere having downed a pint of wine at a Chinese buffet.

It really does looks like football clubs may be cottoning onto the fact that having a big lump leading your attack to head the ball a bit has a tendency to nab a goal or two.

In this age of Pep Guardiola and tippy-tappy football the idea of “lumping it up to the big man” is almost a dirty thought but the stats don’t lie.

In the last two Premier League seasons 180 goals were scored from headers, the year before the old loaf of bread tactic netted 160 times.

This year, there have already been 129 headed goals in the top flight.

This means, with some quick maths, we are on target for 204 headed goals this season. That sounds like a lot to me.

“But why? Why? WHY????” the football purist will shout whilst longingly staring at his Lionel Messi poster.

Well, it’s a solution. A simple solution to a whole load of tricky problems and challenges.

Is a team’s midfield bamboozling you with a series of astonishing short passes? Just knock punt it over their heads. Is a team closing you down too quickly using the high press? Just boot it over the top of them.

Are you too hungover to run about after a heavy night on the town? Just wallop it upfront!*

Add to that, that the “proper” centre back is a dying breed.

Long gone are the days that a defender only needed a broken nose and a lack of regard for his own safety to do a job at the back. Now days they need to be able to “play football” and everything.

Sure, John Stones can pick a pass and move around the pitch like a ballerina on roller skates but when it comes to having an aerial battle with a 6’4” monster you’d take a Tony Adams or Martin Keown any day of the week right?

What I’m saying is that Premier League managers probably haven’t looked at Tony Pulis and thought: “Yeah, we’ll have a go at that… and whilst you’re at it get me one of those smart looking club caps as well.”

Rather they’ve started to see the ‘Big Man Up Top’ no longer just a ‘Plan B’. It’s a tactical choice and it needn’t be sneered at.

It’s not always a low technique, ugly form of the beautiful game.

Look at Zlatan Ibrahimovic, possibly the greatest target man ever. Is he regarded as a ‘Plan C‘ in Sweden? Certainly not.

If you were to give Andy Carroll his own verb it would most likely be “Useless f******g donkey c***”. At least that’s the words I’ve heard slung at him more than any other.

Maybe it’s the simplicity of the tactic that makes it so unappealing. Yet maybe that’s also its beauty.

The fact that the plan can be perfectly replicated in the school yard is both its downfall and it’s benefit. Maybe, sometimes simple is most effective.

I’m sure in years to come we will see the greatest managerial minds of our generation adopting even more “simple” school yard tactics.

Fast forward to the 2025 Champions League final and no doubt we will see Fat Gary being deployed in net because he takes up more space and Smelly Dan playing up front because it’s his ball and if you don’t let him play there he’ll take it home.

*I imagine that this is less of an issue for the modern professional footballer.