James Milner: Englishman Back to A Familiar Supporting Role At Liverpool 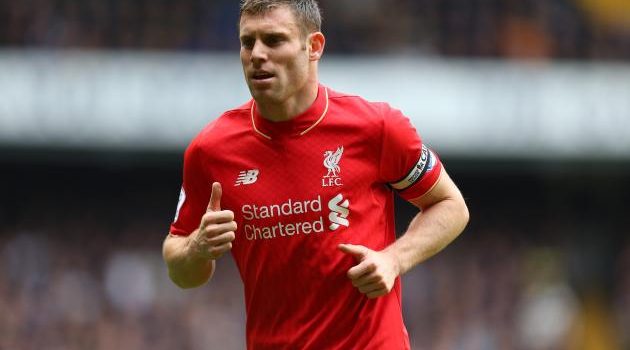 James Milner: Englishman Back to A Familiar Supporting Role At Liverpool

James Milner has been hoping Liverpool can kick-start their season for a while. He was hoping the 4-5 win at Norwich in late January would be the catalyst for a sustained run of form, before he was urging the same a few days later after the League Cup semi-final victory over Stoke City.

That night’s 0-1 loss at Anfield, which Liverpool won on penalties against Mark Hughes’s team, began a run of five games without a win which included a late capitulation to draw with Sunderland and their elimination from the FA Cup at the end of a 220-minute tie with West Ham.

It would highlight the inconsistencies faced by Liverpool in the early days of Jurgen Klopp’s reign, a team showing symptoms of a venomous and fluent attack being undermined by a remarkably under-equipped defence and Milner’s wish of forging a run of good results seemed unlikely to come to fruition.

The England midfielder was back at it again on Sunday after scoring in the 0-6 demolition of Aston Villa.

“Hopefully that can kickstart this final period of the season with some important games coming up” he said, targeting a late push for a European spot as the reds linger nine points short of the fourth-place currently inhabited by Manchester City.

Only three points separate Liverpool from fifth-placed Manchester United and the more plausible target of Europa League qualification, partnered with some silverware from the Capital One Cup meeting with City at the end of February, would represent a decent return from a season of deep-transition on Merseyside.

Liverpool also head to Augsburg on Thursday as this season’s Europa League campaign enters the knockout stages and in Klopp, a manager with experience of negotiating the latter-stages of continental tournaments, qualifying for a return to the Champions League via the backdoor of winning the Europa remains possible.

It will salvage the Reds a degree of success from a season that threatened disaster when Brendan Rodgers was sacked back in October.

Milner was one of seven players added to Rodgers’s squad last summer after he refused a new contract at Manchester City out of growing frustration over a role that was becoming increasingly peripheral. He has featured heavily in his first season at Anfield, missing just five league games and making a total of 29 appearances across all competitions.

His desire to play centrally, another factor that swung his decision to leave Manchester, has also been satisfied, with Milner playing in the centre of midfield 17 times for Liverpool so far this term.

The 30 year old’s versatility and the unquestionable application he devotes to each position has been used sparingly so far, but his multi-positional expertise has been utilised by Klopp by fielding him out on the right-flank in the high-scoring wins over Norwich and Villa.

Milner got 2 of his 4 Premier League goals so far for Liverpool in those matches and 1 of his 6 assists came in the match at Carrow Road.

It has been a lukewarm first season on Merseyside for Milner who has stepped into a midfield that had lost the inspirational influence of former captain Steven Gerrard and has been unfairly expected to carry the mantle of Liverpool’s go-to man as Roberto Firmino, Phillipe Coutinho and Daniel Sturridge have all had injury troubles.

Klopp got that trio together for the first time at Villa Park on Sunday and Milner was back in a more familiar role of the supporting cast on the right, preventing Aly Cissokho from getting forward and exposing his defensive flaws which Sturridge sometimes drifted wide to take advantage of.

It was typical Milner, the unfussy diligent work-horse who patrols the peripheral areas while the more bewitching attackers take the headlines, and a curled free-kick which evaded everybody in the box to nestle in the corner of Mark Bunn’s net was his reward for his most accomplished display so far in a Liverpool shirt.

It was reminiscent of Jakub Blaszczykowski who did the less-heralded leg-work in support of the guile of Mario Gotze, Marco Reus and Robert Lewandowski at Klopp’s Borussia Dortmund.

Milner attracts plenty of detractors for his expertise in the role of the understated but like Manuel Pellegrini at City, who described the midfielder as the most complete English player, and Roy Hodgson who remains steadfast in his picking of Milner for England squads, Klopp seems to be the latest one to sign up in approval of the importance of Milner’s craft.

Barcelona’s Dani Alves is also a paid-up member of that club, having referred to the midfielder last week as the “toughest opponent” he has faced.

His first season at Liverpool has showcased his limitations in being asked to be a creative hub, something he is simply not equipped to be, but is now displaying his strength in an auxiliary role.

The gritty and unnoticed work may fail to convince the supporter, see the fan using Milner as a scapegoat to argue against Liverpool’s recent decision to raise ticket prices to £77, but he’s the one who allows the others to score the goals.

Now Klopp has rediscovered the Milner that so many take for granted, Liverpool may finally go on that run that Milner has long been seeking.