Everton: End of Season Review - The Positives and Negatives 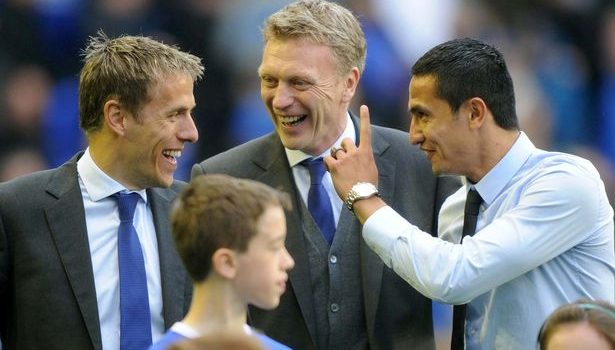 Everton: End of Season Review - The Positives and Negatives

Evertonâ€™s season started with a magnificent Marouane Fellaini-inspired victory over Man Utd and ended meaninglessly with defeat to Chelsea to confirm an unwanted sixth place and David Moyesâ€™ exit.

A year that proved Moyesâ€™ last offered some of the most genuine hope seen at Goodison for years, yet ultimately yielded routine feelings of frustration and hopelessness.

Ignoring the obvious blight on Evertonâ€™s season, the board, and talking only tactics, here are my top five positives and negatives from the Toffeesâ€™ season.

They talk about ‘big yearsâ€™ for youngsters. This was one for Seamus Coleman. After starting well but suffering a substantial injury, the Irishman returned with a Man of the Match display away at Norwich in February and has barely dropped his standards since.

Colemanâ€™s improvement has been staggering, returning to his fearless, galloping best in the final third whilst developing his defensive determination and understanding in a manner that seemed beyond him.

In his first full season at Goodison, Darron Gibson has become Evertonâ€™s most important player. Many Evertonians even wanted him to replace Phil Neville as captain. Deployed in a deeper role than at Man Utd, Gibson connects defence and midfield, midfield and attack, left and right. He holds everything together.

Whenever injury or tactical blunder removed Gibson from the starting line up - away at West Brom, at home to Wigan - Everton fell to pieces.

Next season, he needs to shoot more often but otherwise, an excellent year.

Mirallasâ€™ sharp mind, quick feet and burst of acceleration has often been the difference between an attack and a goal scoring opportunity. He is the first post-Arteta, ‘heâ€™s worth the entrance money aloneâ€™ Everton player. Like Coleman, injury restricted Mirallasâ€™ campaign, he looked the business in nearly every appearance.

Free from injury, with an attacking manager and more opportunity up front, Mirallas should score 20 next season.

Mirallas…. brilliant coup by the Toffees.

This season, Everton have played their best football for nearly 30 years. The Toffees were equally comfortable with either a powerful, direct approach which made use of both Victor Anichebeâ€™s strength and Marouane Fellainiâ€™s superb chest control to set up attacks (eg v Man Utd), or the incisive, short passing which has spread from Pienaar and Baines to the rest of the team, and allowed Everton to retain possession for long periods and wait to pounce (eg v West Ham).

Both attacking strategies are backed up by relentless, collective pressing designed to close down space and retain the ball as quickly as possible (eg v Arsenal).

Everton started the season on the back of a 9-game unbeaten run in the league and went only to lose only seven all year - the lowest season total under Moyes. The Toffees lost the fewest Premier League home games (one) which was in truth a healthy distraction from a sub-standard away record - winless since Newcastle on New Yearâ€™s Day.

But Everton did gain 22 points from losing positions, and in fairness, several of those were lost causes - Liverpool, Spurs and Aston Villa at home for example. What has been markedly different is the attitude after conceding.

Everton drew 15 times this season. Whilst many points were earned from behind, eight were dropped in the last five minutes of games. Had Everton held on, theyâ€™d have been a point ahead of Arsenal after 37 games (at which point a corrupt deal with Chelsea could have sealed both clubsâ€™ Champions League spots!).

Fulham away is one such game. Evertonâ€™s 15 shots on target to the Cottagersâ€™ six meant nothing as Steve Sidwellâ€™s 90th minute goal made it 2-2.

A lack of killer instinct - as also evidenced by the rarity of comfortable victories - has hampered Everton all season, which miserably leads on to…

Nikica Jelavic cost Everton Europe. His finishing has been horrible to watch. There are factors to consider. Momentum from his first, second and third run is consistently halted by Evertonâ€™s slow, long-ball-to-Fellainiâ€™s-chest tactics which barely ever feature a flick-on, plus striking is evidently Moyesâ€™ weakest department.

Despite this, Jelavic has had enough chances to more than double his 8-goal haul, and with a more direct, offensively astute manager next season, this is his challenge to prove himself again.

Jelavic: Fantastic last season, not so much this campaign.

Moyes has a penchant for players out of position. Whilst necessity has forced his hand at times - eg Steven Naismith wide to cover Coleman/ Mirallas - a fair few selections were counter-productive and unnecessary.

Granted Fellainiâ€™s been effective but Iâ€™d back Mirallasâ€™ goal scoring ability over his any day, and the style of play that goes with it.

Play your best players in their best position.

Moyes has made Evertonâ€™s small squad much smaller by repeatedly selecting the same players. He has 11 first names on the team sheet, and no faith in fringe/ youth players.

31-year-old Leon Osman regularly joined up with England for the first time, and yet started more Everton games than ever before - 42 compared to the 10 Ross Barkley, Thomas Hitzelsperger, Bryan Oviedo and Francisco Junior have started between them. Bar Santi Cazorla, Osman was the leagueâ€™s most dribbled past player - essentially second place in a fatigue contest.

Also, Tim Howard sits too comfortably at Goodison Park. Costly errors are too common. More Jan Mucha involvement would have forced Howard to up his game, as witnessed late - too late - in the season.

5. Youâ€™ll never win anything without kids

Despite reaching the u-21 Premier League semi-finals, Evertonâ€™s youngsters were overlooked all year. Promising talents like Shane Duffy, Apostollos Vellios and ConorMcAleny actually appeared less than in previous years. Work that one out. And thatâ€™s without mentioning Ross Barkley.

Moyesâ€™ departure will be to Barkleyâ€™s gain.

Written by Chris Smith, writer and owner of the excellent The Russian Linesman.