Arsenal: A sense of panic lingers at the Emirates 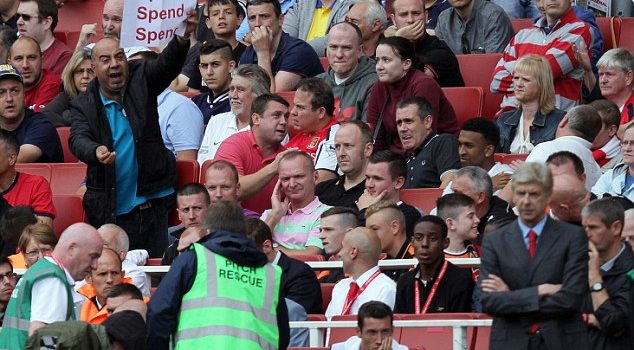 Arsenal: A sense of panic lingers at the Emirates

As we all know, Arsenal have been inactive thus far in the transfer market. Only young striker Yaya Sanogo has been signed up. After Ivan Gazidis confirming they have money to spend, no big names have yet to arrive. The likes of Gonzalo Higuain, Luis Suarez, Luiz Gustavo, Bernard and many other big names have been linked – but nothing concrete has come to the surface.

It’s clearly obvious the positions Arsenal need to fill. Filling them is only half the task. The other half is getting genuine quality in those positions. A world-class goalkeeper would provide much needed competition for Szczesny to begin with, who has gotten complacent with a lack of stiff competition. A centre half of high calibre. Mertesacker, Koscielny and Vermalaen are not enough.

An aggressive, solid centre back that is willing to get stuck in for the good of the team; something Arsenal have missed for years. Next up, the defensive midfielder. The most vital signing Arsenal could make this summer. Yohan Cabaye has been linked, but he’s not what they need. Arsenal have many ball-playing central midfielders, too many in fact. Cabaye is far too similar to those to make a difference.

Arsenal need an enforcing midfielder. Again, aggression and bottle come under scrutiny. A defensive minded midfielder to stop Arsenal being frequently caught out in what is a midfield lacking any physicality. Lastly, the centre forward. Giroud is not good enough nor can’t be expected to take on all of the goal-scoring responsibilities. Where next for the Gunners?

Wenger stated after his sides’ 3-0 win over Fenerbahce that ‘the transfer window starts now’. 12 days to go, but it starts for Arsenal now. So what were the past bids for Suarez, Gustavo, Higuain – a laugh?. There’s an awkward sense of urgency in Wenger to complete some deals to strengthen the group. Rightly so, most people are labelling Arsenal and panic buying.

We’ve seen Arsenal panic buy in the past. Mikel Arteta, Andre Santos & Per Mertesacker were three to be brought in on deadline day in 2011. Not raging successes at all, Arsenal need to have learnt from this situation and ensure not to replicate it. Yohan Cabaye is the latest name strongly linked with a switch to Arsenal.

Understandably, the player is keen on making the step up from Newcastle.

However, it leaves a lot left to be desired from Arsenal. It strikes me, along with others, as a panic buy. If Cabaye was genuinely their target for this transfer window – why not sign him in June or July? That way, he can integrate with his new team-mates, form partnerships and gel in pre-season. The fact Arsenal missed their midfield targets could mean Cabaye is not their main choice, but are reluctant to get him as time is running out.

Lastly, Arsenal have been their own worst enemy in placing them in their current predicament. Leaving it until the last two weeks to do their business could be disastrous. Clubs will be unwilling to sell their assets this late with little time to find replacements. Financially, Arsenal may have to pay over the odds for players simply not worth it. But what else can they do? A lack of activity has cost them.

Unless there is a plan in place that nobody knows - this transfer window is seemingly one that has failed to live up to it’s promise; from an Arsenal perspective.