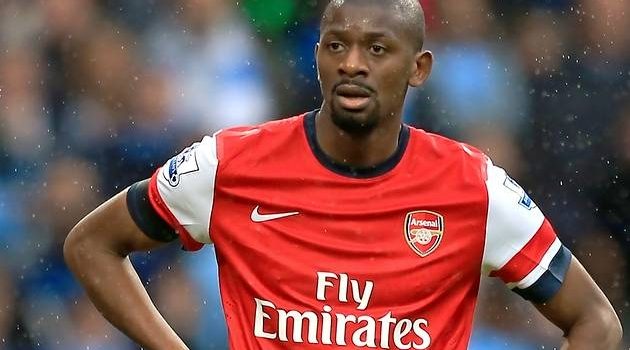 It is easy to forget that Abou Diaby is still under contract at Arsenal. The Paris born midfielder has made just 25 league appearances in the last 3 seasons, troubled by a succession of thigh, calf, ankle and knee injuries, which have always hampered any consistent run of form in the first team.

After starting Arsenal’s opening 5 matches this season he was again taken off injured in the 2-1 home defeat against Chelsea, and since then Wenger has been unable to speculate on a return date, condemning the player once again to an indefinite absence from the first team.

While it may be easy to assume that his consistent absence has long been made up for, his magnificent form at the start of the season- where Arsenal conceded just 2 goals and played excellently in a 2-0 victory at Liverpool- has served to leave a further bitter taste in the mouths of Gunners fans, who again have to contemplate what might have been had he remained fit.

The most important factor to remember when realising the lost value of Diaby is to consider the increasing value of dynamic box-to-box midfielders in modern day football. In an era when passing, technical football is the envy of Europe, physicality is coming back into fashion in order to counter and bully more agile players.

Remember Mourinho’s astute selection of Pepe in a holding role during the El Classico’s last season? Villas-Boas’ successful deployment of Moussa Dembele against Michael Carrick and Paul Scholes in Spurs’ 3-2 victory at Old Trafford earlier on in the season? Or maybe even Holland’s aggressive approach during the 2010 World Cup final?

Being a physical, aggressive side is of course by no means revolutionary. Wenger’s ‘Invincibles’ were renowned for being a huge team (in fact Arsenal received a shocking 80 red cards between 1996-2010), and Claude Makelele perhaps redefined the holding role while at Chelsea in a physical manner.

The point remains however that a physical approach had become slightly outdated and unfashionable following the rise of Guardiolaism at the end of the previous decade, where Pep’s Barcelona showed Europe how a team of technically adept passers could outplay anyone.

Being physically superior is now once again turning into a European trend, and the prominence of in form physical players is proven. Yaya Toure remains perhaps the finest midfielder in England. Marouane Fellani is having the best season of his career. Victor Wanyama has been instrumental in Celtic’s impressive Champions League Run. Spurs are unbeaten when Moussa Dembele plays, yet have lost 55% of their matches without him.

I could go on- Diame at West Ham, Strootman at PSV, Bodmer at PSG. What would Arsenal do for a player of an equivalent mould?

With a majority of teams in Europe now fielding 3 midfielders there tends to be a trend. The ideal combination for complete variety is to field a deep lying midfielder coupled with a box-to-box midfielder, behind a designated attacking playmaker. The box to box player is essential in this combination, as their role is instrumental in holding up the ball, maintaining possession, and linking attack to defense.

Arsenal were a much more cohesive unit with Arteta, Diaby and Cazorla, despite the individual excellence of the returning Jack Wilshere.

Just look at Spurs and Dembele- without him Villas Boas fields Huddlestone and Sandro alongside each other- two out and out defensive players offering little support to the stuttering Clint Dempsey. Ray Wilkins stated earlier on Sky Sports News earlier this week that Dembele should have been worth at least £20m+, a clear sign of the huge effectiveness of these players at the moment.

The sale of Alex Song was Wenger’s expulsion of any true physicality from his current midfield. That was not necessarily a bad thing at the time- an Arteta- Wilshere- Cazorla midfield is still dynamic- and Wilshere is good enough to play a box to box role. But the thing is, Wilshere’s inclusion complicates things.

When Wilshere and Cazorla start, Wilshere has a much greater license to get forward than Diaby did, which subsequently means Cazorla has to resume a deeper role to maintain some defensive cover in midfield. This is detrimental to the team as Cazorla is at his brilliant best when he is given a free- ‘central winger’- role, where he can drift out to the flanks to cause overloads, safe in the knowledge that Diaby would be covering.

Lets not forget about Arteta- he is not a destroyer and he isn’t particularly dynamic. In reality he is a deep lying playmaker, similar to Xabi Alonso, who incidentally Mourinho partners with Sami Khediera, an archetypal physical box-to-box player. Arteta has never played as a holding player before- Everton always deployed him in an advanced role. Leaving him alone to cover Arsenal defensively is risky, and its no surprise that since Diaby’s injury when Wilshere has partnered Cazorla Arsenal have conceded 10 goals in 3 matches.

Finally- lets not forget about Diaby’s increased significance at defending set pieces, which went onto immediately cost Arsenal against Chelsea. Height at the set piece- both attacking and defending- can be vital, and Diaby’s loss here can again not be understated.

Arsenal’s best performance of the season? No, not the fortunate thrashing of Spurs following Adebayor’s clumsy red card. The 2-0 victory at Anfield- Rodger’s attempted replication of Pep’s Barca was embarrassed . Diaby was incredible (and man of the match); Joe Allen was devastated and had no control over his passing, and Cazorla scored a cracker from drifting out wide.

Perhaps it is more the type of player that Diaby epitomises that is the loss for Arsenal at the moment- dynamic physical players are clearly invaluable to any team at the moment. Add to that the balance, clarity and variety that he added to Arsenal’s fine midfield at the start of the season, and it is clear that his loss has been hugely felt.

With a ‘considerable’ budget for January it will be interesting to see if Wenger chooses to compensate for his loss.

Check out his excellent football blog full of tactical analysis, The Football Butler