WATCH: Goals and highlights from Barcaâ€™s win over Alaves 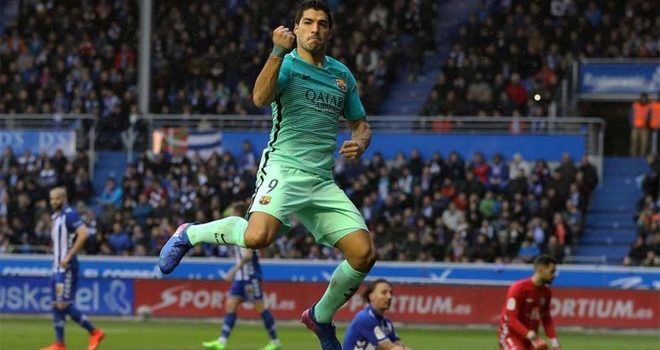 WATCH: Goals and highlights from Barcaâ€™s win over Alaves

Video uploaded by YouTube channel Sport HD 2017 showing all the goals and highlights from Barcelonaâ€™s 6-0 hammering of Deportivo Alaves at the Estadio Mendiozorroza in their Liga BBVA encounter.

Barcelonaâ€™s goals were scored by Neymar, Lionel Messi, Ivan Rakitic, an own goal from Alexis Delgado and a brace from Luis Suarez.

With his brace, Luis Suarez cements his position at the top of the Liga BBVA goalscoring chart with 18 league goals while Lionel Messi increases his tally to 17 this season.

Because of their victory, Barcelona temporarily regain ascendancy of the Liga BBVA table with 48 points ahead of rivals Real Madrid while Copa del Rey finalists Alaves remain in 12th place.